Boris Johnson to be Next UK Prime Minister: FTSE 100 vs FTSE 250

Boris Johnson in for a Tough Time

The next Prime Minister Boris Johnson will face a tough time from the off with his confirmation as the next Tory Leader likely to be met with more resignations from the Conservative party (Philip Hammond and David Gauke to resign). That said, the margin of victory for Boris Johnson will carry some weight as a strong win will suggest firm support for Mr. Johnson’s Brexit stance. (Of note, the final Conservative Home Poll had Boris Johnson gaining 73%). However, result that is below 60% could inspire those MPs who are against a no-deal Brexit. Consequently, given that uncertainty will continue to reign, gains in the Pound are likely to be limited, thus supporting the FTSE 100 over the FTSE 250.

Yesterday, it had been reported that Tory MP Charlie Elphicke had been charged with sexual assault, consequently losing his Tory whip. In turn, this reduces the Conservatives working majority to three. There is also a high probability that the by-election on August 1st will see the Tory’s lose their seat, further reducing the working majority to one. As such, with risks rising that there could be additional defections and resignations, the government under Boris Johnson is likely to be rather weak. Therefore, an early election could be a potential solution for Boris Johnson, particularly given the dwindling support for the Labour party. However, for an election to take place, it is likely that a further extension would be needed to facilitate one.

Given that a Boris Johnson government is unlikely to reduce the current uncertainty and with his rhetoric that he is willing to carry out a no-deal Brexit. The FTSE 100 stands pat to outperform relative to the FTSE 250 amid weakness in the Pound. Of note, the Pound has a negative correlation with the FTSE 100, largely on the basis that a weak Pound supports FTSE 100 profitability with two thirds of the revenue generated from the top 100 companies generated overseas. While for the FTSE 250, a weak Pound will typically weigh on the domestically focused FTSE 250. 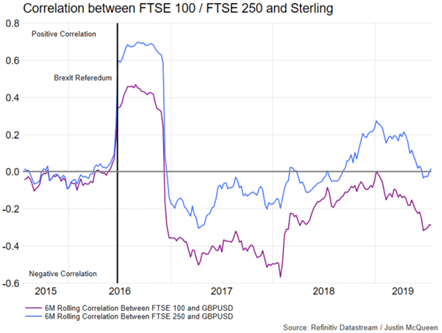