USD May Gain Against SGD, MYR Despite US Growth Slowing to 2017 Low

While the US Dollar ended this past week cautiously to the upside, its path was very choppy. At one point, the Greenback sank as expectations of a 50 basis point rate cut from the Fed this month rose to greater-than-even odds. This was tamed after clarification from New York Fed President John Williams, after which the USD rallied as fears of rising tensions in the Strait of Hormuz fueled demand for haven assets.

Versus ASEAN currencies, it was thus a mixed bag. A notable outperformer was IDR despite the Bank of Indonesia delivering a rate cut (as expected). The central bank continues to closely monitor the Rupiah’s level, with Coordinating Economic Minister Darmin Nasution saying that the country sees room for it to strengthen further.

The US Dollar did appreciate this past week against the Indian Rupee and Singapore Dollar. The INR tracked Indian government bond yields lower, with risk aversion sending the NIFTY 50 to its lowest since May by the end of last week. As for USD/SGD, it aimed cautiously higher in the aftermath of last week’s dismal Singaporean GDP report. 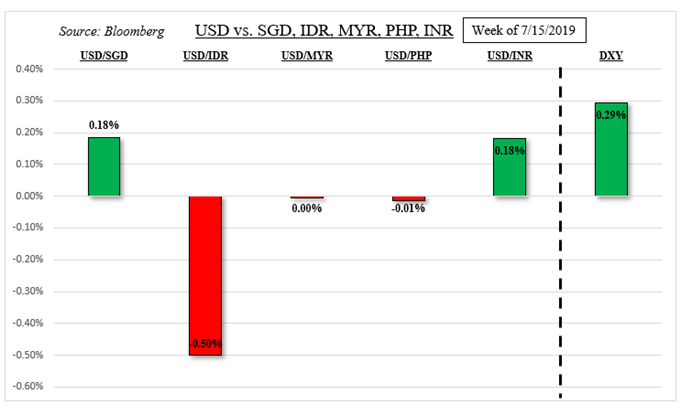 Ahead, the Singapore Dollar is eyeing inflation data. In Singapore, CPI is anticipated to slow to 0.8% y/y in June from 0.9% prior. Core inflation is also expected to tick down to 1.2% from 1.3%, the weakest print since March 2017. These readings will be particularly peculiar after the economy contracted by the most since 2012. Disinflation fears may pour cold water on MAS SGD “gradual appreciation” policy bets.

In Malaysia, things are anticipated to be quite the opposite. CPI is expected to jump from 0.2% y/y in May to 1.5% last month. Such an outcome would be the fastest pace of price growth since May 2018, and in-line with Bank of Malaysia’s estimates. But, it may not do much to stem rate cut expectations because the central bank mentioned that growth is subject to risks such as worsening trade tensions, keeping them on their toes.

In the United States, economic data has still been tending to persistently disappoint relative to expectations as markets face uncertainty over the validity of a US-China trade truce. Yet, the highly-liquid US Dollar has still performed well considering such a dramatic shift in dovish monetary policy expectations this year. This speaks to its potential for haven demand if sentiment sours and a premium for liquidity arises.

Upcoming US Q2 GDP data is expected to slow to 1.8% q/q, the most tepid since Q1 2017. A softer outcome may fuel risk aversion as fragile global growth estimates are thrown a curveball by concerns over the health of the world’s largest economy. Last week, we saw China, the world’s second-largest economy, slow to its weakest since at least 1992. Meanwhile, the markets are already anticipating about 3 rate cuts this year from the Federal Reserve.

As such, dire circumstances that jolt the Fed into a more aggressive easing path could cause an unwinding in risk-oriented capital, boosting USD emerging market and ASEAN currencies. For more detailed analysis covering the prospects for global growth, keep an eye on the next world economic outlook report from the International Monetary Fund (IMF) this week.