AUD Markets Price In a Third RBA Rate Cut. Will They Get It?

When market watchers think a quick, isolated interest rate cut is coming, they call it a ‘one and done’ cut. The Australian Dollar may have to face a variation on that, let’s call it ‘two and through.’

The Reserve Bank of Australia took the key Official Cash Rate down to a new record low of 1% earlier this month. That was the second straight monthly reduction for the first back-to-back rate cuts since 2012. This pace of action was a surprise for the market but, in hoping for more, as futures markets suggest they do, some investors might be getting ahead of themselves.

Right now the futures curve suggests an OCR of 0.75% by the second quarter of 2020, so one more quarter-point trim. That’s quite a long way off in current market conditions though, as those who can recall how quickly that curve went from pricing in rises to cuts in the last year or so will readily recall. It’s really anybody’s guess whether that cut will come.

There’s some evidence to suggest that the bar to it will be very high.

RBA Governor Philip Lowe has often wondered aloud about the likely efficacy of further action. He’s surely got a point. Aussie borrowers have been working with record low rates since the middle of 2012. Cutting from here cannot hope to be as stimulative seven years later. Australian consumers have also done what people do when very cheap money is pushed at them. They’ve borrowed to the hilt. The RBA must be wary of stoking this blaze much higher. Australian consumers are among the world’s most indebted.

Fiscal Stimulus May Take Some Pressure off the RBA

The RBA has also repeatedly begged for more fiscal stimulus to relieve it of the monetary burden. Pleas of this sort have been commonplace from developed market central banks since the financial crisis, but the RBA’s has at least been answered. A big tax cut has just passed through Parliament in Canberra.

Of course, the RBA has a clear mandate. While inflation remains weak it must maintain a bias to ease policy. But it has just done so, and quite emphatically. It may not go again without very clear evidence that the Australian economy will suffer severe damage should it not.

So Australian Dollar traders should be like the RBA and watch that labor market. Should it hold up, a third cut could be quite a stretch. 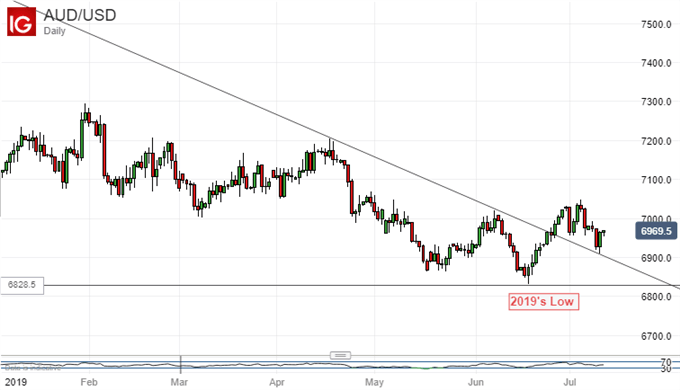 AUDUSD has been wilting since 2018 as US interest rates have topped those of Australia. The Aussie is not about to get a huge boost of monetary support but, assuming the global economy doesn’t lurch into another broad downturn, its base rates may not fall further as quickly as the markets now assume.