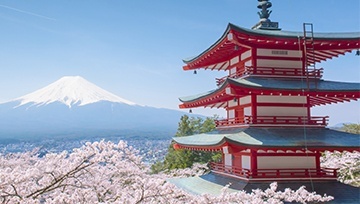 US Dollar Falls on Fed as ASEAN FX Rise

The US Dollar, looking at DXY, had its worst week since February 2018 as the markets all but fully priced in a rate cut from the Federal Reserve next month. This occurred after the central bank left rates unchanged this past week and median forecasts showed a 50 basis point downshift in the long-run federal funds rate outlook. Yet, a clear signal to cut rates next month seemed notably absent from Chair Jerome Powell.

Still, this allowed for ASEAN currencies, such as the Singapore Dollar, to outperform against the Greenback. Add to this an unexpected rate hold from the Philippine central bank, which extended declines in USDPHP. Governor Benjamin Diokno said that a “prudent pause” will allow them to “assess the situation” after inflation unexpectedly accelerated in May. He still opened the door for more cuts ahead.

A rate hold by the Bank of Indonesia was less surprising, but it delivered cuts in reserve ratio requirements for lending institutions. The central bank is intervening in the foreign exchange market. Their optimal range this year is USDIDR between 14000 and 14400. Meanwhile, the Indian Rupee didn’t rise as much. The minutes of the June RBI meeting showed that Governor Shaktikanta Das said that growth impulses have weakened. 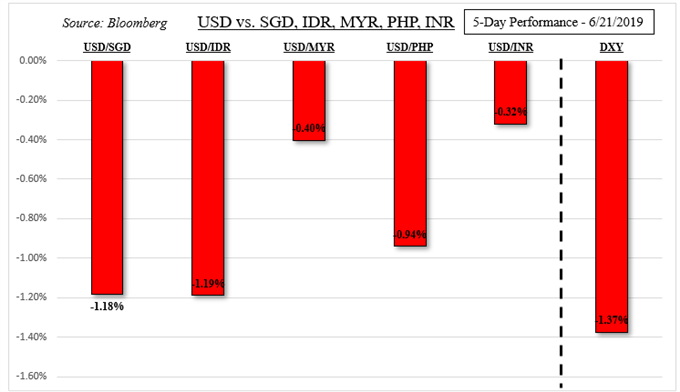 A notable risk clouding the global growth outlook, and extending to the Fed, is uncertainty surrounding the US-China trade war. US President Donald Trump and his Chinese counterpart Xi Jinping are expected to meet at this week’s G20 summit in Osaka, Japan. If talks head in the wrong direction, the US may impose an additional $325b in Chinese import tariffs at a rate of 25%.

On top of the current levies in place, that would encompass nearly all goods the nation buys from China, and would warrant a supportive Fed. US Vice President Mike Pence hinted that there are “positive signs” of progress with China. But, this cannot be taken for granted given Trump’s sudden shift in tone back in May that sent stock markets falling again. If there is risk aversion, the Dollar may benefit from haven demand.

Should talks improve otherwise, this may cool bets of near-term easing from the Fed. That risks sinking sentiment given such aggressive easing priced in by the markets. That will also be balanced by how key US economic data performs such as GDP and core PCE. Data has been tending to increasingly underperform relative to expectations. We will also get a speech from Mr Powell, who may get asked about July’s rate decision.

USDIDR eyes US Secretary of State Michael Pompeo visiting India on Monday. He is scheduled to meet with Subrahmanyam Jaishankar, India’s Minister of External Affairs. Prime Minister Narendra Modi recently retaliated with tariffs against the US after Trump ended preferential treatment status for about $6b in goods purchased from India. If Washington escalates tensions, this will likely sink the Rupee.

Meanwhile, the Malaysian Ringgit also looks to May’s inflation report. CPI is anticipated to tick slightly higher to 0.3% y/y from 0.2% prior. Keep in mind that the central bank of Malaysia cut rates at its last monetary policy announcement in May. A softer-than-expected inflation outcome may bolster the case of further easing, sending USDMYR to the upside.