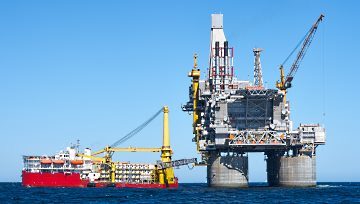 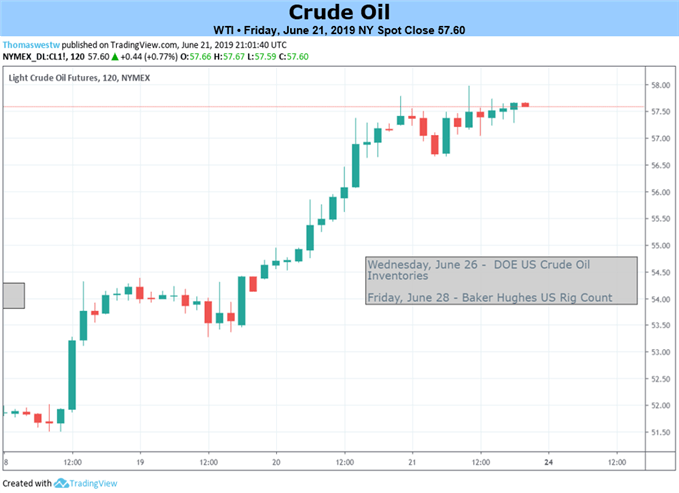 Did we get it right with our latestcrude oil price forecast? Get it free to find out!

Crude oil prices perked up last week, reversing from five-month lows to enjoy their best five-day run in nearly two years. The move ran parallel to a rise in the bellwether S&P 500 index while bond yields dropped, pointing to the dovish shift in Fed monetary policy expectations as the driving catalyst at work.

Further, swelling tensions between the US and Iran appear to have created a positive feedback loop from energy prices back to pace-setting equities benchmarks, and thereby to broader sentiment. Supply disruption fears have buoyed oil, which helped energy sector shares lead last week’s rally on Wall Street.

Both themes remain in play in the week ahead. A revision of first-quarter US GDP data is expected to bring a narrow upgrade, but that may not seem so supportive after June’s PMI surveys published Friday underscored the rapid slump in thereafter. They put US economic activity growth at its slowest in a decade.

This might remind investors that the underlying impetus for the Fed’s dovish pivot is hardly an encouraging one for cycle-sensitive commodities, which might deflate some recent gains. Meaningful follow-through is unlikely however as markets withhold conviction ahead of Friday’s G20 summit in Osaka, Japan.

The gathering faces even more scrutiny than usual as the spotlight turns to a side meeting between US President Donald Trump and his Chinese counterpart Xi Jinping. They are expected to try to revive stalled trade negotiations. The spat is at the forefront of investors’ global growth fears.

Signs of de-escalation may brighten the outlook for energy demand, but they might also trim perceived scope for monetary stimulus, lifting the US Dollar. That might muddy crude oil price action as traders struggle to reconcile conflicting catalysts.

A disappointment might be more clearly negative, weighing on growth bets but also stoking haven demand for the Greenback. Indeed, the currency has held up remarkably well despite collapsing yield support. With seemingly little room for a further dovish shift in prevailing Fed policy bets, it may power higher.

On balance, that seems to make for an asymmetrically greater risk of oil weakness versus the alternative. The geopolitical backdrop remains a wildcard however. If the US and Iran move closer to open conflict, worries about the viability of critical shipping routes might swamp other considerations and lift prices.