After the arrest of Huawei’s CFO in Canada in late 2018, relations between the United States and the world’s largest manufacturer of telecoms equipment have been strained to say the least. In May, the Trump administration placed Huawei on the “entity list” which is effectively an export blacklist. The list forbids US companies from exporting any components or technologies to Huawei. The corporation has since been offered an extension until August 19.

Nonetheless, the announcement placed significant pressure on the tech-heavy Nasdaq as investors attempted to gauge the appropriate share price of the impacted stocks. While the Nasdaq has since recovered, American companies in the supply chain have not yet felt the full impact of the blacklist – and neither has Huawei.

As the world’s largest producer of telecoms equipment and the world’s second-largest smartphone manufacturer, the supply chain of Huawei is both diverse and immense. The company sources chips, batteries and technologies from over 10 countries – with the United States comfortably in second place behind China. With 23 suppliers from the United States alone, it cannot be understated how impactful facing an export ban from the country will prove. 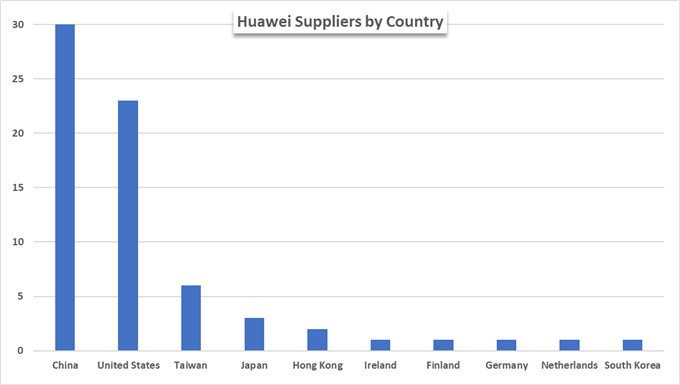 Some of the most noteworthy American suppliers are Broadcom, Qualcomm, Micron, Intel, AMD, Microsoft, Texas Instruments and Nvidia. As many of these firms are industry leaders, the loss of one client is unlikely to see the company shutter its business, but it will undoubtedly alter their quarterly forecasts. To that end, adverse impacts may be delayed, and some firms could even see a slight uptick in sales as Huawei looks to stockpile inventory prior to the ban. 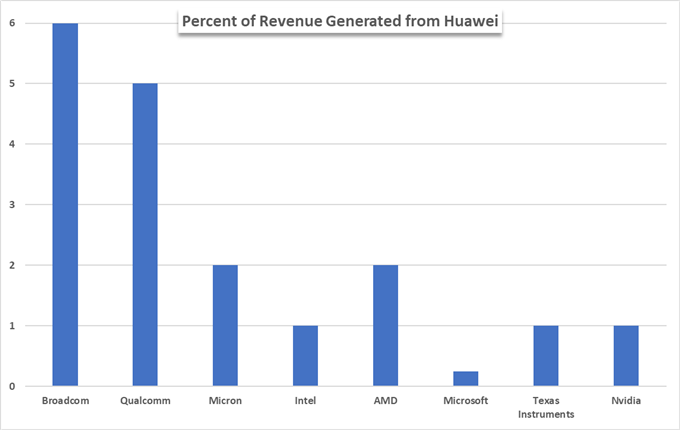 That said, stock prices have already begun to reflect future expectations. Led lower by semiconductor stocks, members of the Huawei supply chain have seen mixed performances since President Trump’s executive order on May 15. In the same span, the S&P 500 is 2.4% higher. Although each stock faces challenges in addition to Huawei, the entity list is a shared headwind none can escape and will remain troublesome for the foreseeable future. Therefore, it is only reasonable to assume Huawei will experience the most pressure. 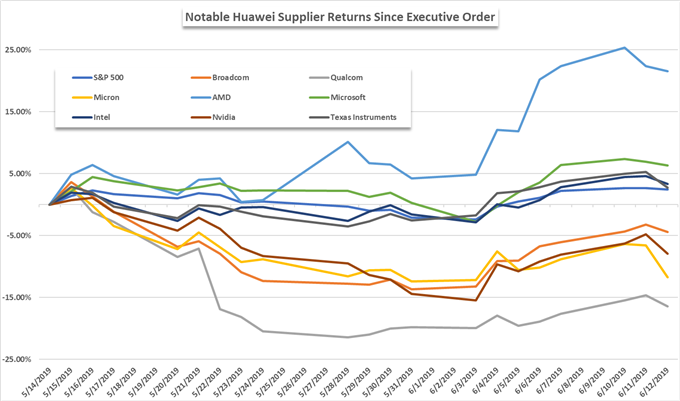 Despite the adjustment period before the blacklist is enacted, the cracks are already starting to appear in Huawei’s production line. On June 12, Huawei Consumer Device Chief Richard Yu announced the company would be “unable to supply” a laptop that was due to be unveiled in the week. Further still, Mr. Yu said the product itself might have to be entirely scrapped – depending on how long the entity list is in effect. The laptop delay is likely the first of many ramifications of the blacklist, which will force Huawei to look outside the United States for technology and semiconductor sourcing. Unfortunately for Huawei, that may be easier said than done. 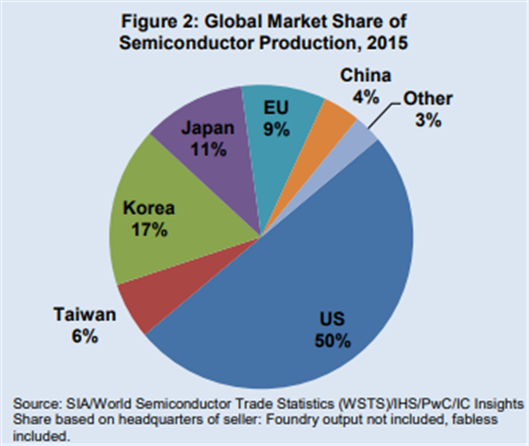 As of 2015, the United States accounted for roughly half of the world’s semiconductor production according to a study conducted by the International Trade Administration. Thus, a quick shift to another supplier is unlikely and – given the expansive reach of American intellectual property – not as clear-cut as it may seem.

According to US law, foreign technology production can still fall under the ban if more than 25% of the finished good is produced in the United States. This extends the reach of the blacklist to companies like ARM, a chip designer based in the UK and owned by Softbank. ARM recently announced a suspension to business with Huawei because they conduct their chip research and development in the United States.

Beyond tangible products, the blacklist will also impact software. Google’s Android operating system will fall under the blanket of banned exports – an engine used in a significant number of Huawei’s smartphones. Similarly, the Windows operating system offered by Microsoft falls under the ban. This will further entangle the software side of the already beleaguered laptop production of Huawei.

Given the current landscape, Huawei is likely grasping for a resolution. One such option, but perhaps unlikely given the state of US-China trade relations, is to change the company’s nature of operations. Almost exactly one year prior to Huawei’s blacklisting, the Trump administration banned sales of Chinese phone maker ZTE on similar grounds to the detention of Huawei’s CFO – the sale of goods to North Korea and Iran. The United States asserted these sales violated existing sanctions.

After months of negotiations, the United States and ZTE eventually arrived at an agreement. In exchange for removing ZTE from the entity list, the company would pay a $1 billion fine and make changes to its executive leadership and allow a US compliance team to oversee activities. The former remediated the sanction violation while the latter assuaged national security concerns. 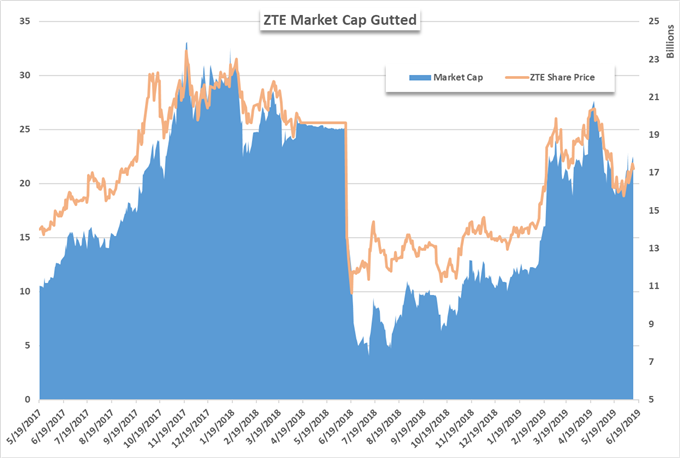 Consequently, ZTE’s market capitalization was gutted. While there is precedent, little evidence exists to suggest the Trump administration or Huawei will venture down this path to resolve the current conflict, but it is an option. At the end of June, trade officials from both countries will have the opportunity to meet in Osaka Japan at the G20 Summit – but pessimistic commentary from both sides does not bode well for a quick resolution.

With that in mind, the ongoing negotiations present intriguing trading opportunities outside share-specific positions. In the equity space, the unequitable impact from the ban may produce a deeper divergence between the US and Chinese tech sectors. Although Huawei is not listed on any index because it is privately owned, the underperformance of the world’s largest telecoms producer – and an especially large player in China – will undoubtedly weigh on the public tech sector. 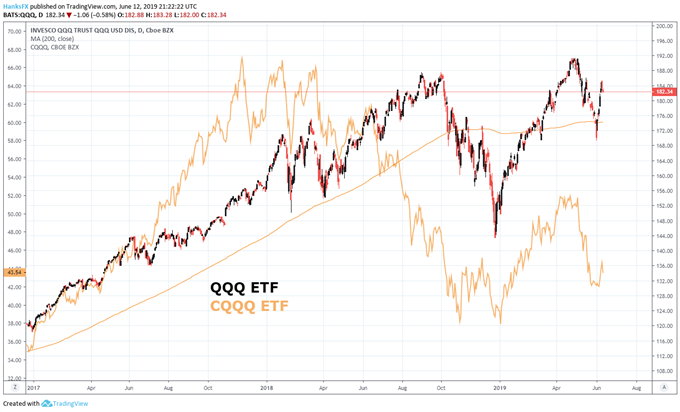 Similarly, foreign investors and manufacturers may fear a trade war spill-over into other companies and preemptively search for alternatives outside of China. This divergence can be explored via the country’s respective tech indices or through the QQQ and CQQQ tech-tracking ETFs. 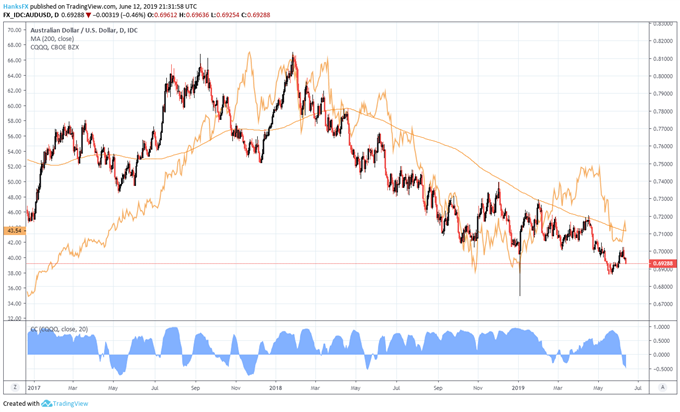 AUDUSD and CQQQ correlation in blue

In the currency market, AUDUSD may offer an opportunity to capitalize off Huawei’s endangered position - but also faces broader macroeconomic themes. Still, AUDUSD has proven to be an underperformer since the advent of the US-China trade war and it typically shares a statistically significant correlation with AUDUSD. Thus, a prolonged conflict or flareup should only look to further the pair’s weakness. As market themes unfold and traders reposition accordingly, follow @PeterHanksFX on Twitter for updates to this trade idea.

Read more:Trade Wars and Tariffs Have Put the US Auto Industry in Peril