Last week gold and high-yield corporate debt notched some of their most extreme flows since their inception when Federal Reserve officials struck a dovish tone. Alongside the record flows into the GLD and HYG ETFs, the crude oil-tracking USO ETF and the Treasury bill-shadowing BIL ETF saw spurious demand. Meanwhile, the surging likelihood of rate cuts from the Fed have seen traders shy away from US Treasuries with longer maturities.

$40 million poured into the USO ETF last week as traders looked to capitalize on a sharp decline in the price of crude oil at the end of May. After plummeting roughly 20% in just three weeks, investors were eager to call the bottom and lunge at the first buying opportunity. Since then, crude prices have seemingly bottomed out around $51.50. 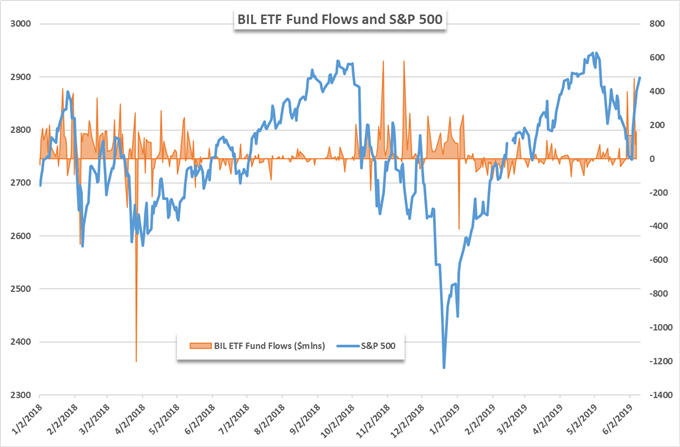 While the crude oil recovery and flows into USO were likely encouraged by a series of fundamental and technical developments, the reasons behind the demand for the 1 to 3-month US T-Bill-tracking BIL ETF were less opaque. Raking in $475 million on Wednesday alone, the fund recorded over $1 billion in fresh capital last week – good for the largest weekly inflow for the year by a comfortable margin.

A dovish Federal Reserve which bolstered the GLD and HYG ETFs similarly boosted BIL as investors looked to capitalize on virtually risk-free return in a timeframe that boasts a higher yield than some longer-term counterparts with the prolonged yield curve inversion. The same forces have seen investors shy away from the TLT ETF which grants exposure to Treasuries with a maturity over 20 years.

Longer-Term Treasuries Fall Out of Favor 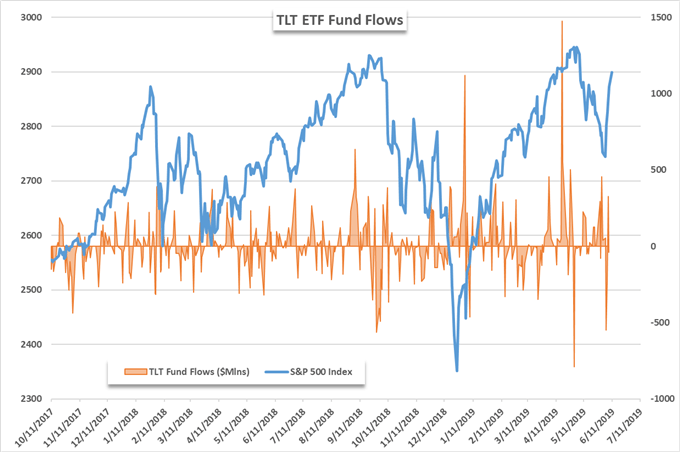 Unlike BIL, the TLT ETF saw -$445 million leave its coffers last week. Tuesday’s outflow of -$550 million notched the fund’s second-largest intraday outflow in the year-to-date. The divergence in demand for opposite ends of the yield curve further reflects the distorted risk-reward profile of the Treasury landscape. With a week to go before the Federal Reserve’s June meeting, the Fed blackout period has begun which will leave markets thirsting for insight on the Fed’s policy path.

The lack of commentary will likely send market participants to data and developing global themes. That said, a particularly quiet week for economic data will see fluid themes like the US-Mexico relationship take center stage. Over the weekend, President Trump announced Mexico had made a deal to avoid tariffs – but circumstances under which the deal was made may give rise to further uncertainty and equity turbulence if President Trump pursues the same tactic against China and the European Union.

As G20 leaders prepare to meet in Osaka Japan at the end of the month, President Trump may look to expand on his recent action toward Mexico and attempt to force leaders to the negotiating table. But negotiating under duress has proved less effective for President Trump when dealing with China and the European Union – a caveat that could result in prolonged tension and uncertainty while battering risk assets and making the odds of a rate cut more likely. For more ETF analysis and commentary, follow @PeterHanksFX on Twitter.