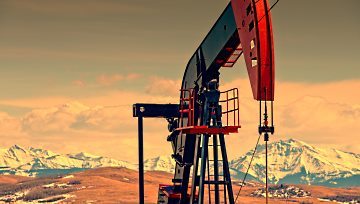 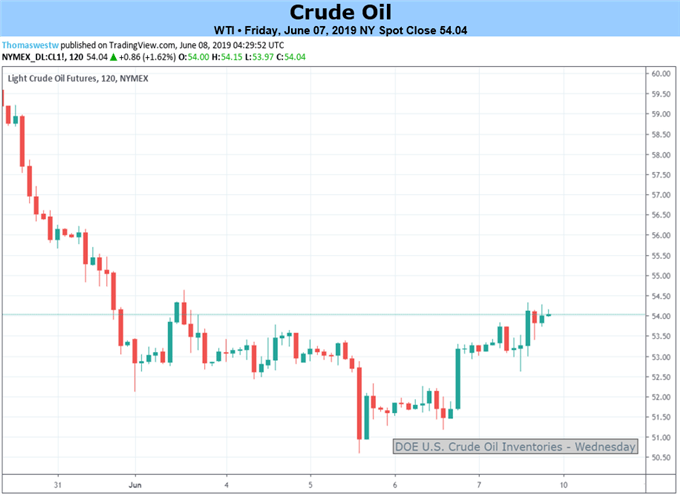 Crude appears to be entering a bear market as the shift in U.S. trade policy dampens the outlook for global growth, but efforts by the Organization of the Petroleum Exporting Countries (OPEC) may curb the recent selloff as the group remains committed in stabilizing the energy market.

Crude prices have fallen more than 20% from the 2019-high ($66.60) as the U.S. imposes a 5% tariff on all goods coming from Mexico, and the current environment may keep oil under pressure as President Donald Trump pledges to implement “monthly increases as per schedule.”

It seems as though the Trump administration will continue rely on tariffs to carry out its agenda as the president tweets that “the higher the Tariffs go, the higher the number of companies that will move back to the USA,” and mounting trade tensions may continue to drag on the price of crude as the U.S. and China, the two largest consumers of oil, struggle to reach a trade deal ahead of the G20 Summit on tap for later this month.

However, OPEC and its allies appear to be taking steps to ward off a bear market as the Minister of Energy of the Russian Federation, Alexander Novak, meets with the Minister of Energy, Industry and Mineral Resources of Saudi Arabia, Khalid Al-Falih, with the representatives noting that “it is important to further promote the active development of bilateral dialogue both at the level of ministries and at the corporate level in order to solve the tasks facing our countries to increase and deepen trade and investment cooperation.”

The comments suggest OPEC and its allies will continue to regulate the energy market even though Russia President Vladimir Putin notes that there “have certain differences in opinion regarding the fair price,” and the group may respond to the recent selloff in the price oil as Mr. Putin insists “$60-65 a barrel suitsus just fine.”

With that said, efforts to reinforce the OPEC+ alliance may curb the recent selloff in crude, but the broader outlook for oil is longer constructive as both price and the Relative Strength Index (RSI) snap the bullish trends from earlier this year. 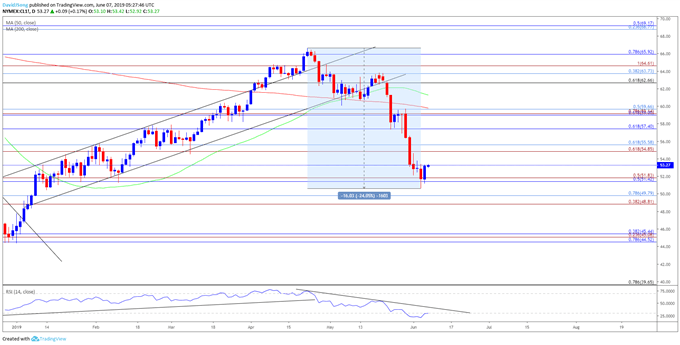 Keep in mind, a ‘golden cross’ formation took shape last month as the 50-Day SMA ($61.28) crosses above the 200-Day SMA ($59.81), but the difference in slope undermines the potential for a bullish signal.

With that said, there appears to be a broader shift in market behavior as the RSI extends the bearish formation from April, but the failed attempts to close below the $51.40 (50% retracement) to $51.80 (50% expansion) region raises the risk for a larger rebound as the RSI crosses back above 30 and flashes a textbook buy-signal.