The US Dollar ended this past week little changed, wiping out gains that it accumulated throughout the week in the final moments. Markets priced in higher probabilities of a Fed rate cut by year-end as US President Donald Trump turned his attention towards Mexico, threatening to impose tariffs across the board. Equities sunk as sentiment soured, the S&P 500 had its worst week this year (-2.49%).

The highly-liquid Greenback tuned in on a more-dovish Fed, allowing ASEAN currencies to hold their ground in “risk-off” trade. A notable outperformer was the Indonesian Rupiah. It was bolstered as S&P Global Ratings raised the nation’s credit rating to BBB from BBB- while the central bank kept intervening to uphold the currency. The Jakarta Stock Exchange Composite Index extended gains.

As anticipated, broad weakness in crude oil prices helped to mitigate weakness in the Philippine Peso as the Bangko Sentral np Pilipinas (BSP) warned of further cuts down the road. As the Malaysian Ringgit traded relatively flat, the Singapore Dollar strengthened to its highest point against the US Dollar in over two weeks. 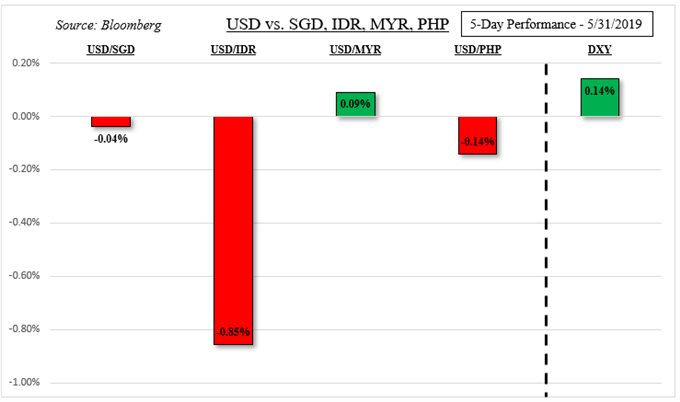 The week ahead contains a solid round of Asia Pacific event-risk. In the early stages of the week, regional markets will be weighing May Malaysian and Philippine PMI data after respective Indonesian data clocked in at 51.6 from 50.4. Readings above 50 indicate expansion and confidence could be soured after US-China trade talks recently stalled, creating further uncertainty for global growth.

We will later in the week get Chinese Caixin PMI data which may follow last week’s disappointment in official estimates. That may increase worries over global growth. On Wednesday, the Philippine Peso will look to local inflation data where CPI is expected to tick down to 2.9% y/y in May, away from the mid-point of the BSP’s target. The roughly 16% drop in oil last month may even cool local inflation further.

Given how vulnerable markets are with the pickup in volatility, more declines in equities could be in store unless there is a path forward to avoiding an escalation in trade wars. Beijing is reportedly mulling whether or not to ban rare-earth metals to the US. While risk aversion may inspire more Fed rate cut bets, potentially weakening the US Dollar, its status as the world’s reserve currency could end up working in its favor.

Given this backdrop, all eyes will turn to a speech from Fed Chair Jerome Powell, who will be discussing monetary policy strategy on Tuesday. The central bank has stressed a data-dependent approach, with the Fed’s preferred measure of inflation cautiously disappointing last week. Though markets seemed to pay more attention to softer University of Michigan sentiment and US-Mexico tariff threats.

On the whole, economic data in the world’s-largest economy is still tending to disappoint relative to economists’ expectations as of late. This could open the door to downside surprises in US ISM manufacturing and non-manufacturing PMI data. Keep an eye at too on the jobs report on Friday. In the end, a focus on liquidity may send USD higher against the Malaysian Ringgit and Singapore Dollar.Expect the Bank of Indonesia to step in to tame a selloff in its currency should that be the case.