The start of June brings forth no good news for the British Pound. The May UK Manufacturing PMI showed the first contraction in the manufacturing sector since July 2016, with output at a 34-month low and new export business declining at its fastest rate in more than four-and-a-half years. The backdrop of a weakening UK economic environment is doing little favors for the British Pound, which is in focus over the coming days as UK Prime Minister Theresa May’s term nears its expiration date on June 7.

The European parliamentary elections have been one major reason why sentiment has soured on the British Pound over recent weeks. With Nigel Farage’s Brexit party taking top spot among the UK delegates, and the Liberal Dems taking second place, there is clearly a lot of anti-establishment sentiment circulating in the UK right now. Such an environment bodes poorly for both the Labour and Tory parties if there is another general election; it’s possible that neither has a strong showing. In turn, it seems that the odds of a no deal, “hard Brexit” have increased in a material fashion.

The UK remains embroiled in domestic political turmoil as the lack of progress on Brexit has ended the tenure of UK Prime Minister Theresa May. While jostling for the next Tory party leader continues as former London mayor and Brexiteer Boris Johnson has emerged as a clear frontrunner, the rise of the Brexit party around the European parliamentary elections has raised concerns that, if there were to be a second referendum for either the (1) EU-UK Withdrawal Agreement, or (2) a no deal, “hard Brexit,” the UK electorate might opt for the latter.

Next Key Dates for Brexit

Now that we’ve gotten to June, there are several key deadlines coming up over the next few weeks. The following dates represent the next hurdles in the Brexit process: 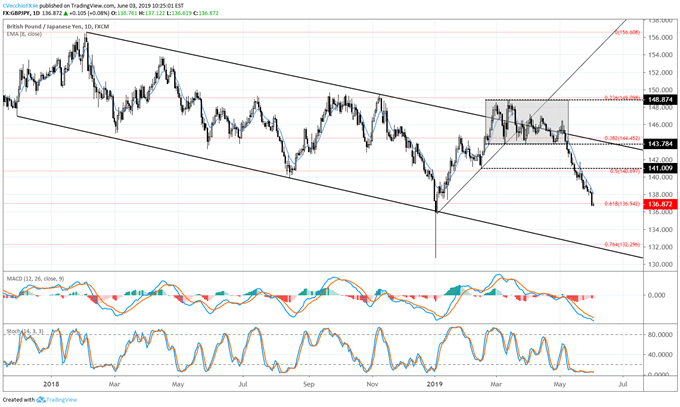 Bearish momentum in GBP-crosses has been firm over the past several weeks, and this negativity hasn’t been more pronounced than in GBPJPY price action since the multi-month range break. With global equity markets turning over along global sovereign bond yields, the Japanese Yen has seen its appeal as a safe haven currency grow significantly since the start of May.

Since May 6, GBPJPY price has closed below its daily 8-, 13-, and 21-EMA envelope every session; price has only eclipsed the daily 8-EMA intraday once during this timeframe, on May 22. Now that GBPJPY has hit the 61.8% retracement of the October 2016 low/January 2018 high range, there may be a technical level of support to look to for a small bounce rebound to the daily 8-EMA.

As it stands, the GBPJPY price outlook remains bearish until the daily 8-EMA is breached on a closing basis. Otherwise, losses may continue back down towards the closing low of the year-to-date, which came in at 135.99 on January 3, and ultimately the 76.4% retracement of the October 2016 low/January 2018 high range at 132.30. 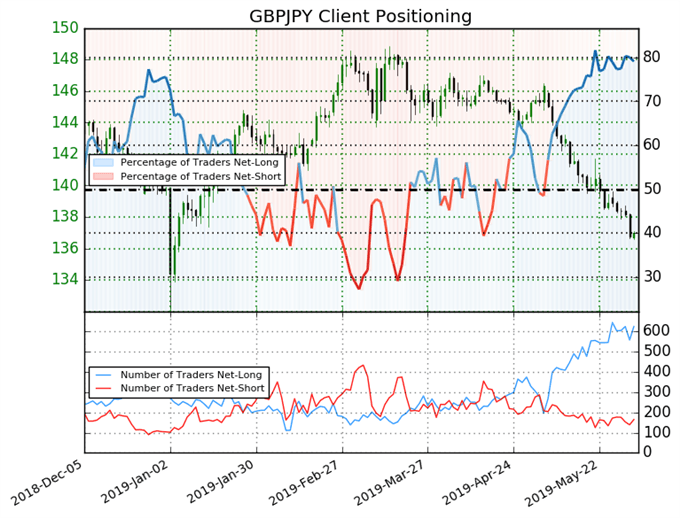 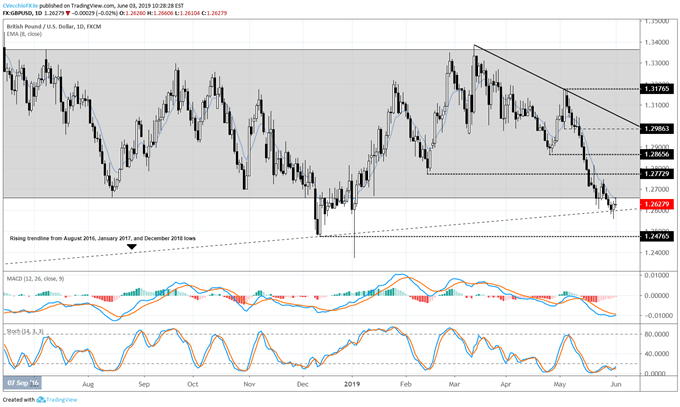 Like its GBPJPY counterpart, GBPUSD price has been pinned below its daily 8-, 13-, and 21-EMA envelope for the better part of the last month, having closed below the daily 8-EMA on May 8. Ongoing bearish momentum points to more losses in the near-term after a brief rebound in price action back to the daily 8-EMA; only a close back above the daily 8-EMA would neutralize the otherwise near-term GBPUSD bearish bias.

But if GBPUSD prices are going to break lower from here, then the rising trendline from the August 2016, January 2017, and December 2018 lows will need to give way first – an event that failed to materialize on the last attempt back in December 2018. Should GBPUSD lose 1.2600 over the coming days, it would constitute a break of said trendline and would raise the odds of a deeper lose towards the December 2018 low at 1.2477. 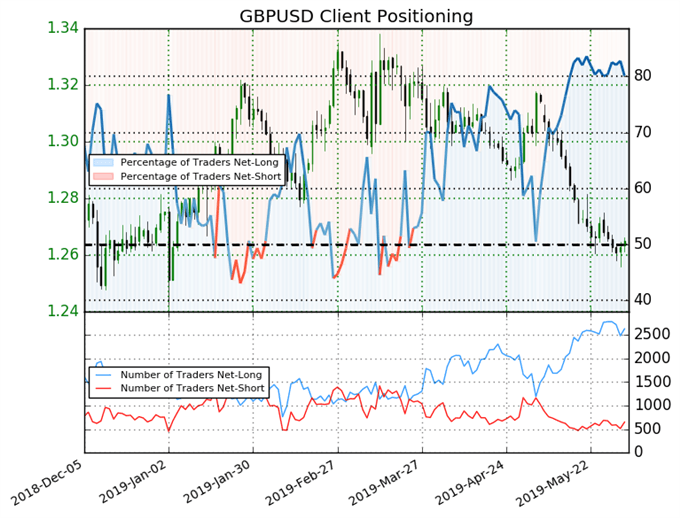