The US Dollar succumbed to selling pressure this past week, weighed down by increased expectations that the Federal Reserve could deliver a cut this year. Disappointing US Manufacturing PMI data helped drive this dynamic, pointing to the weakest expansion in a decade. As a result, most ASEAN currencies outperformed against the Greenback this past week.

The Philippine Peso easily took the top spot, also benefiting from a drop in crude oil prices as anticipated. USD/PHP tends to have a close relationship to the commodity given that it is a key import for the nation and aggressive gains in oil last year helped to fuel a selloff in PHP. Meanwhile, the Singapore Dollar also performed well as it tends to closely follow DXY.

Softer-than-expected Malaysian CPI data (0.2% versus 0.4% y/y anticipated in April) may have held back the Malaysian Ringgit this past week after the central bank recently cut rates to bolster economic activity. USD/IDR fell on the other hand as the Bank of Indonesia reiterated that it will remain in the market to stabilize the Rupiah. 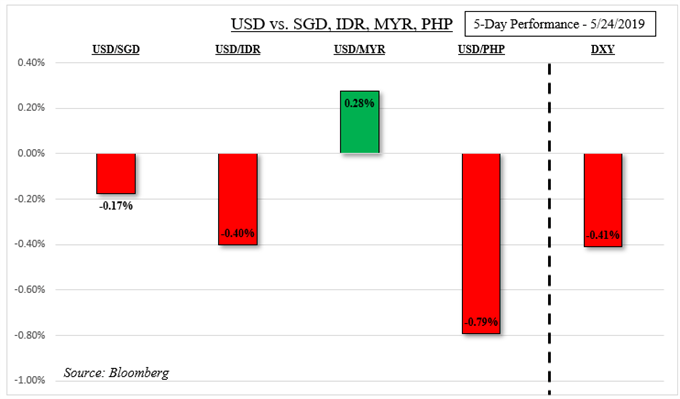 Week Ahead: Chinese PMIs in the Context of Trade Wars

The regional ASEAN economic calendar docket is relatively thin, with the top-tier event-risk nearby from China where we will get Manufacturing PMI data. China’s manufacturing sector could be looking at contraction (49.9 expected) after two months of expansion. Lately, local data has been tending to underperform relative to economists’ expectations, opening the door to a downside surprise.

This comes after US-China trade wars have seen an escalation. The former nation has imposed a higher tariff rate of 25% on about $200b in Chinese imports while threatening to potentially add an extra $325b on top of that. China has retaliated, imposing about $60b in levies on the US. This is arguably why stock market volatility risk has been elevated as of late and it leaves some ASEAN currencies at risk.

Chinese newspapers have stepped up efforts to criticize the US for the stall in negotiations, and market sentiment can easily sour if talks take a turn for the worse. Malaysia, Singapore, the Philippines and Indonesia all have key trading relationship with the world’s second-largest economy. Blowback can make its way into their economies, and soft Chinese data can amplify global growth concerns.

US Data on Tap

Despite this, there is the possibility that the US Dollar could depreciate in the week ahead, offering the Singapore Dollar more room to rally. This is because we have a slew of data due: consumer confidence, GDP and core PCE (the Fed’s preferred measure of inflation). As in China, US economic data has been tending to underperform relative to expectations.

If this trend continues, we may see declines in USD/IDR and USD/MYR. Sentiment-linked crude oil prices are also vulnerable to trade wars, and USD/PHP may again benefit from that and a weaker Greenback. For more timely updates on ASEAN currencies and the impact of US-China trade wars on them, you can follow me on Twitter @ddubrovskyFX.