Swedish Krona and Norwegian Krone traders prepare themselves for possibly the most volatile week for Nordic FX year-to-date. SEK and NOK are expected to be the most active G10 majors against the US Dollar with one-week implied volatility at 6.95 and 6.78, respectively. The top event risks this week will include Nordic unemployment rates, central bank meeting minutes and the upcoming European elections.

Sweden’s unemployment rate is scheduled to be released this week with anticipations of a 6.9 percent reading, slightly less than the previous report that showed a 7.2 percent rate. Following the release on April 18, the Swedish Krona plunged against most of its major counterparts and arguably was the beginning of USDSEK’s atmosphere-puncturing rise. Unemployment in Sweden is now at its highest point since June 2018. 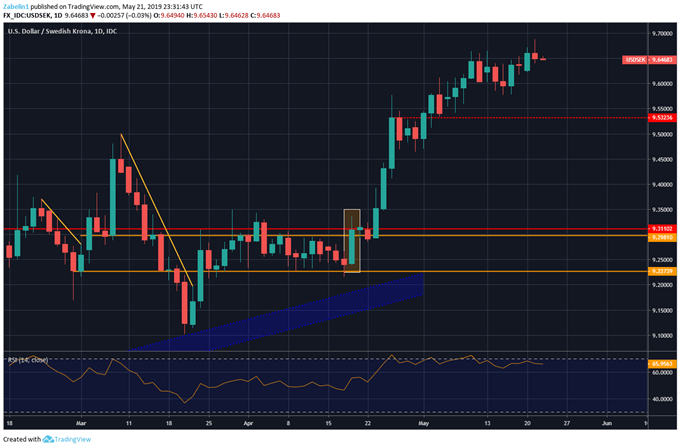 If unemployment data disappoints, it could lead to greater expectations that the central bank will further postpone its intended rate hike. The Krona in this case would suffer and would likely reinforce USDSEK’s upward trajectory. Year-to-date, the Krona is the worst performing G10 currency. Overnight index swaps are already showing a 10 percent probability of a cut, up from around three percent last week.

Economic data in Sweden has been tending to underperform relative to economists’ expectations against the backdrop of fundamental headwinds. Riksbank policymakers have primarily expressed concern about Brexit and the US-China trade war in addition to slower European growth. As an export-driven economy, the Swedish Krona is sensitive to changes in risk appetite, particularly out of the EU – Sweden’s biggest client.

In Norway, the unemployment rate is expected to come in 3.7 percent, slightly lower than the previous 3.8 percent reading. Unlike Sweden, Norway’s economy has been outperforming relative to analysts’ expectations. This in large part has to do with the recovery in crude oil prices that have helped boost Norway’s petroleum-based economy. In fact, the Norges Bank remains one of the most hawkish central banks in the developed world.

However, if global risk-appetite sours, it will likely drag down crude oil prices and force policymakers to adopt a less-hawkish outlook. If unemployment data comes in worst than expected, it would almost certainly pressure NOK against the backdrop of uncertainty over US-China trade relations. Slower growth in Europe is also of concern to the Krone because of Norway’s strong reliance on healthy European demand.

In the EU, the upcoming European parliamentary elections may shake the Euro and the EU to its core as Europeans show what they really think of the EU. Eurosceptic parties are projected to make unprecedented gains, leading to fears that European laws on key issues ranging from budgets to trade policy could be abruptly taken into a less market-friendly framework. Voting will take place May 23-26.

On Friday, the ECB will be announcing its meeting minutes with expectations of dovish undertones. While there has been a minor improvement, Eurozone data has been tending to underperform relative to economists’ forecast. Growing threats from Brexit, local elections and the US-China trade war will likely continue to negatively impact the outlook and could prompt ECB officials to delay their rate hike cycle.

Today’s release of the FOMC meeting minutes will reveal in greater detail policymakers’ outlook on monetary policy and the strength of the economy. Yesterday, St. Louis Fed President James Bullard said that the US-China trade war and tariff impositions would start impacting monetary policy if they lasted for another six months. This preceded his acknowledgment of the growing risk associated with rising corporate debt.

At the end of the week, preliminary US durable goods orders will be released with forecasts of -2.0 percent. If the reading comes in at expectations or worse, it may send the US Dollar lower amid fears of lower future output against expectations of a higher probability of a cut at the next meeting. Conversely, equities may get a boost from the expectation of comparatively cheaper credit. This explanation would fall in line with the market reaction from the most recent FOMC meeting.