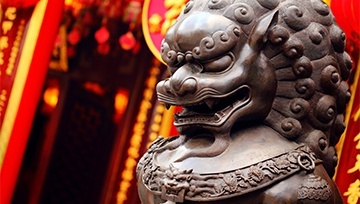 The revival in US-China trade war fears took its toll on ASEAN currencies despite a rather tepid week for the US Dollar on the chart below. The latter was torn between risk trends and monetary policy fundamentals, as markets weighed on how an escalation in trade wars can impact the Fed’s relatively neutral stance. Meanwhile, USD’s trait as the world’s most liquid currency helped subdue selling pressure.

USD/SGD, USD/IDR, USD/MYR and USD/PHP all rose this past week. Central bank’s in Malaysia and in the Philippines cut rates this past week (and on a side note, in New Zealand as well), with the former weakening the Ringgit while the latter temporarily boosted the Philippine Peso. The Indonesian Rupiah extended declines as USD/IDR attempted to break resistance around 14340. 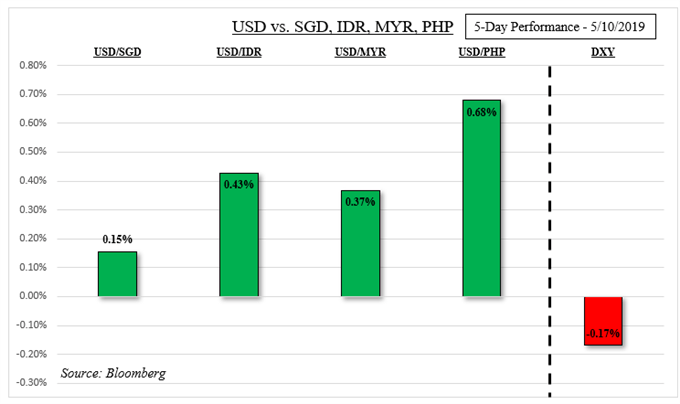 The disparity between the US Dollar and ASEAN currencies should ring as a warning bell. The Association of Southeast Asian Nations have key trading relationships with China. An escalation in trade wars can reignite pressure on the world’s second-largest economy after it recently showed signs of improving economic activity. Then there is the vulnerability to bouts of risk aversion, sinking sentiment-linked assets.

For the Bank Negara Malaysia and Bangko Sentral ng Pilipinas, preemptive rate cuts that should help to bolster domestic economic conditions are a welcoming sign. External risks have arguably increased, but this may come at the cost of weaker currencies. The central bank of the Philippines is going to discuss cuts to reserve requirement ratios, an issue that was absent this past week as they opted to remain data-dependent.

We also have the Bank of Indonesia interest rate decision on May 16, but the 7-day reverse repo rate is anticipated to be kept unchanged. Amidst selling pressure in the Rupiah and their commitment to FX stability, reiterated this past week, the central bank intervened in the bond and FX spot market and will likely step up efforts if USD/IDR climbs further.

Turning our attention back towards China, we will also get more insight into how the nation is handling. Industrial production and retail sales are up, and they may surprise higher given recent trends in economic data tending to outperform relative to economists’ expectations. But, the shroud of trade uncertainty may dull much optimism on the data in the medium-term. 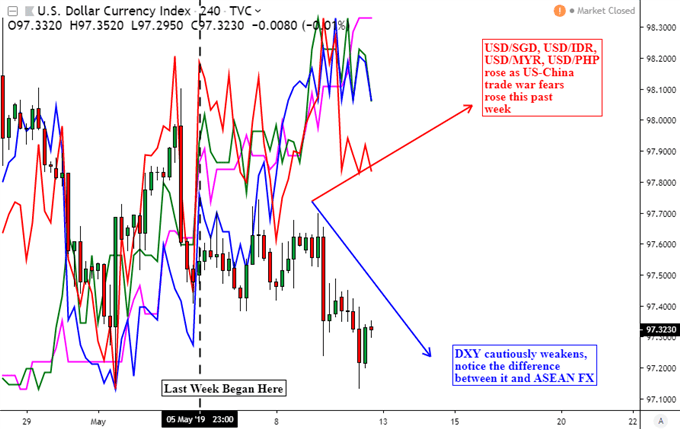 That is because in the end, last week the world’s two largest economies failed to reach a trade accord. The US proceeded with imposing higher tariffs (25%) on about $200b in Chinese imports. The latter said it will retaliate. On Friday, US President Donald Trump gave China a month to come to an agreement as the details of what could be another $300b in levies, in case a breakdown occurs, are set to be released on Monday

The reaction in markets on Friday showed optimism that a trade deal could be reached, but like the overhang of Brexit on the Bank of England, the path forward is uncertain. Keep in mind, another risk for ASEAN currencies may stem from similar rocky relationships between the US and Europe. May 18 marks decision day for Trump on whether to raise auto import tariffs or defer on it for another 6 months.

As we saw this past week, on balance this may lead to the US Dollar cautiously rising against the Singapore Dollar, Malaysian Ringgit, Philippine Peso and Indonesian Rupiah unless it becomes more clear of where trade talks may go. I will be closely monitoring these developments and you may follow me on twitter here @ddubrovskyFX for timely updates on ASEAN FX and respective technical analysis.