In a series of Tweets last Sunday, President Trump called into question the likelihood of a US-China trade deal – sending global equities tumbling as risk aversion spiked. With the benefit of hindsight, we now know such a deal was not made, and US tariffs on $200 billion in Chinese goods jumped to 25% from 10%. The increase will likely see trade wars pose a considerable headwind to future equity strength until an agreement is made.

In conjunction with the US-China trade war, President Trump will have the option to open two more trade war fronts as he looks to reduce trade deficits with key partners. After the completion of a section 232 investigation – the same classification that resulted in steel and aluminum tariffs – was completed three months ago, President Trump has not offered his final decision.

The Commerce Department’s investigation sought to analyze the threat to national security that importing foreign automobiles poses. If the threat is deemed credible, President Trump would impose auto tariffs on major trading partners like the European Union and Japan. Alternatively, the President can extend the deadline by six months. 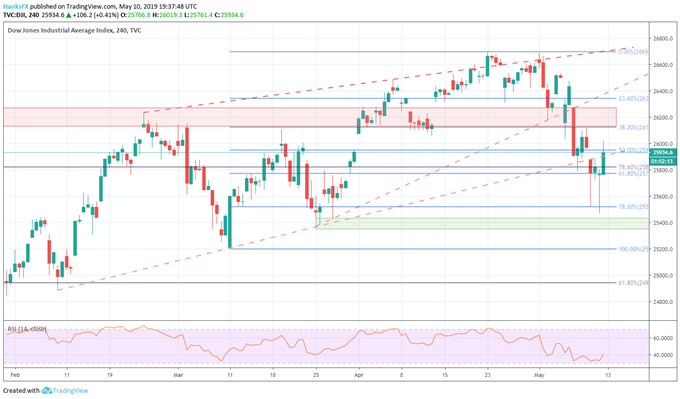 With the deadline at hand and little commentary on the matter from the President, an extension seems more probable. The President has been vocal on the condition of the stock market in the past and plans to run on the economy in his 2020 Presidential bid. To that end, he may look to avoid further market turmoil by extending the deadline. Given Friday’s price action and the likelihood that the President will delay a decision, the fundamental forecast for the Dow Jones is bullish.

Although next week’s economic calendar is sparse, Germany has two big data prints to negotiate. On Tuesday both Eurozone and German GDP are scheduled for release. As the “powerhouse” of the European Union, German GDP carries with it significant price influence – particularly over the DAX. That said, the German economy has offered signs of slowing for months and another poor GDP print could see the German index continue its descent from last week.

Apart from hard data, the bloc will look to avoid US auto tariffs. Responsible for roughly 12% of the DAX, any indication that President Trump will enact tariffs would likely spell disaster for European equities. On the other hand, bullishness from an extension would likely be limited as the uncertainty is only prolonged. 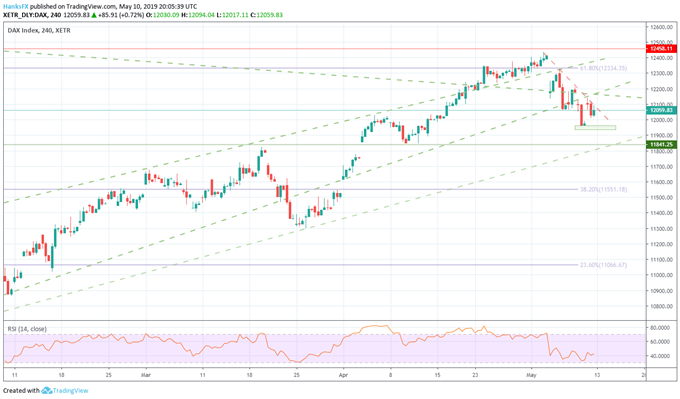 Just like the Dow Jones, the Nikkei will look to catch its breath after last week’s selloff. With a distinct lack of data from the Japanese economy, price action will likely follow the trend of other global equity markets. Like the DAX, any indication that auto tariffs will be implemented would weigh heavily on the Japanese index as the sector accounts for 5.05% of the Index as of Friday’s close.

Looking for a technical perspective on equity? Check out theWeekly Equity Technical Forecast. 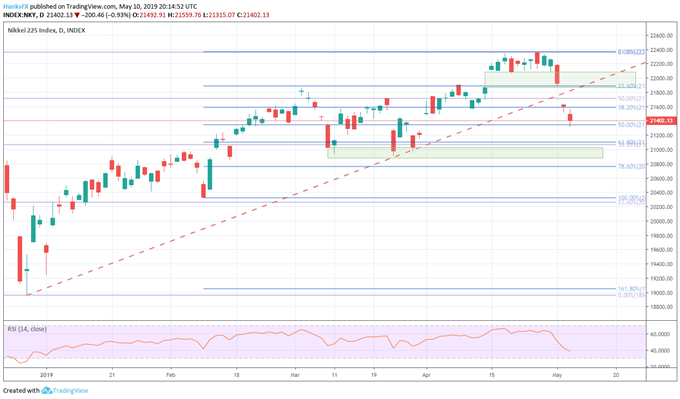 Gold Forecast: Prices Susceptible to Upbeat US Data Despite Threat of Trade War