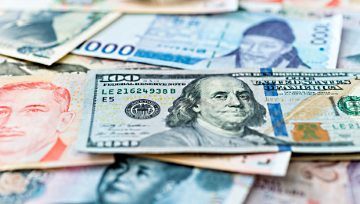 US equity markets doubled down on their weakness in Friday trading after President Trump announced the United States would increase tariffs from 10% to 25% on $320 billion in Chinese goods. Unsurprisingly, the pressure has spurred investors to rethink their capital allocation. Together, the three largest broad-market tracking ETFs – SPY, IVV and VOO – saw -$5.9 billion leave their coffers since Monday. 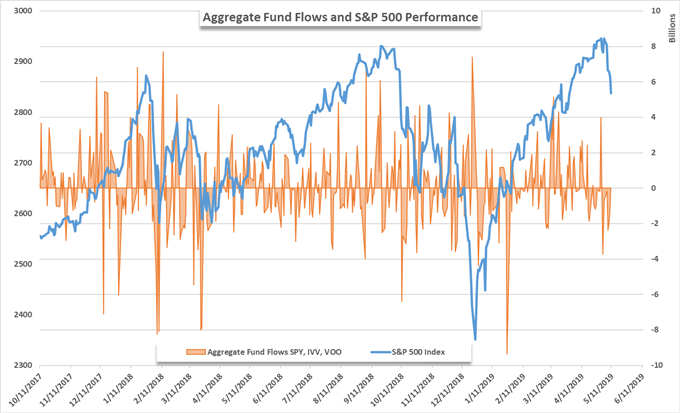 With an average daily outflow of -$1.175 billion this week, the three funds are an expression of investor concern regarding the state of risk assets. As investors flee those assets, typical market convention would suggest government bonds and safe haven commodities like gold would see increased demand. 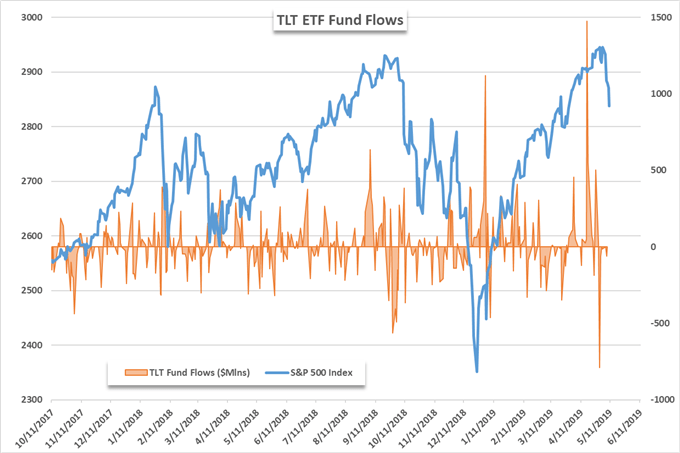 Interestingly, investors were not interested in longer-term government bonds. The TLT ETF, which grants exposure to US treasuries with a maturity over 20 years, notched outflows for the week. After recording its largest intraday outflow in the last 1.5 years on April 30, TLT experienced further pressure this week – despite the selloff in equities. That said, fund flows were relatively deadlocked with only -$62 million exiting the fund. 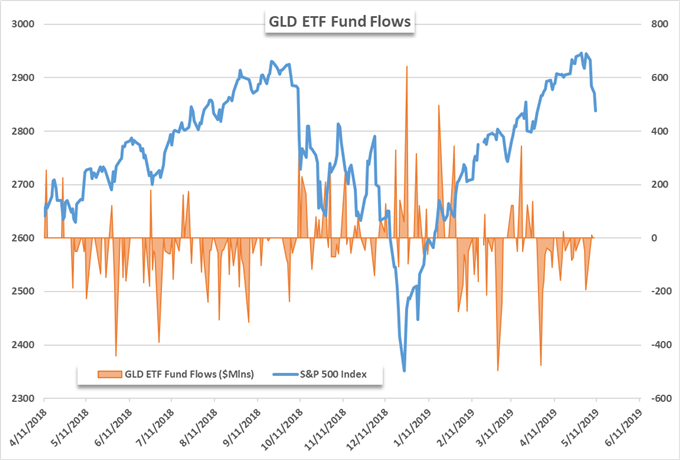 Similarly, the GLD ETF saw few buyers this week as -$36 million was shifted out of the fund. The outflows continue the recent trend, with only two days of net inflows since April 1. During this time, the price of gold has dropped from $1,292 to $1,286. Despite a change of only $6, the fund has seen -$1.8 billion move elsewhere – suggesting the precious metal has lost some of its luster.

Although past instances of equity weakness have seen investors pile into funds like TLT and GLD, this round has bucked the trend. With muted fund flows into the typical safe-haven funds, it begs the question – where are investors shifting their capital?

Check out our Forex for Beginners Trading Guide to learn tips and tricks for the Forex market.

In times of extreme risk aversion, the most sought-after trait in an asset is liquidity. With that in mind, the currency market may be the key. Open 24 hours a day from Sunday 5PM EST to 4PM EST on Friday, the currency market is the most liquid market in the world. Large players from central banks to hedge funds provide liquidity alongside speculators and this week’s risk aversion has spurred a rally in a key safe-haven currency.

The Yen has gained across all pairs this week, as investors brace for further uncertainty as the trade war enters its next stage. While the examined funds are not indicative of all capital flows, a lack of demand for safer funds alongside a rise in the Yen would suggest some capital is shifting between markets. As risk aversion continues, view a deeper analysis of different currency crosses and equity markets that have been impacted.