- The British Pound is back under pressure as signs emerge that cross-party talks between the Labour and Tory party leaders won’t produce enough votes to pass the EU-UK Withdrawal Agreement.

- Now that the UK will participate in the European parliamentary elections, it seems possible that UK Prime Minister Theresa May’s government may be nearing the end of the line.

- Retail trader FX positioning suggests that the British Pound may be due for a rough few days.

A potential path forward on Brexit has been closed off, much to the angst of the British Pound. UK Prime Minister Theresa May has announced that she does not intend to resign early, setting up another obstacle between herself and her frustrated Tory party. With the Tory party unable to call a ‘no confidence’ vote until December 2019 at the earliest, the easiest path for someone like Boris Johnson becoming prime minister is no longer available.

May Won’t Resign; No Confidence Vote from Labour?

Now that the UK has announced that it will partake in the European parliamentary elections, it appears that the cross-party talks between UK PM May’s Tory party and Jeremy Corbyn’s Labour party are heading for an uninspiring conclusion. The Labour party could call a ‘no confidence’ vote against UK PM May, and given the distaste her own Tory party has for her, it’s not implausible that she loses said confidence vote.

Another UK General Election Could be Coming

It’s increasingly likely that another general election is around the corner. If UK PM May somehow survives the next few weeks, then the clock effectively runs down until the June 30 checkpoint. Without any progress, EU negotiators may demand ‘democratic action’ like a general election or a second referendum. It’s still too soon to dismiss the worst-case option, that the UK crashes out of the EU without a deal.

With the latest Brexit news producing very little for traders to hang their hats on, the British Pound has started to weaken at a time when global risk appetite has already started to buckle. While this has led to pronounced weakness in the commodity currencies, it would be irresponsible to dismiss the rally in safe haven currencies like the Japanese Yen and US Dollar and the implications for pairs like GBPJPY and GBPUSD. 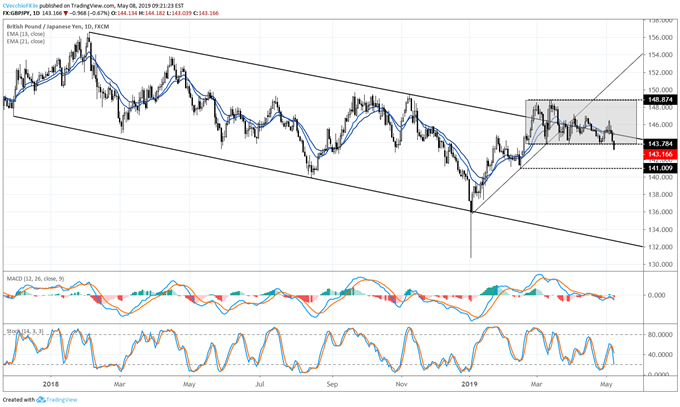 Between February 22 and May 7, GBPJPY prices traded in a range between 143.78 and 148.87. We’ve previously said that “the consolidation in GBPJPY price action may be akin to a coiling spring storing potential energy; the release of the kinetic energy, i.e. the breakout from the range, is worth waiting for.” Now, on May 8, a breakout may be gathering pace in GBPJPY.

The downside breakout in GBPJPY prices is developing as the broader range low at 143.78 has started to give way. Momentum has started to shift to the downside, with the price below the daily 8-, 13-, and 21-EMA envelope while both daily MACD and Slow Stochastics trend lower in bearish territory.

The measured target for the GBPJPY range break would call for a 509-pip drop below 143.78, ultimately targeting 138.69. But before then, GBPJPY will have to contend with the late-February swing low at 141.01. To this end, traders will want to be on alert for a potential ‘false breakout’ scenario: if US stocks begin to trade higher and volatility levels subside, it’s likely that GBPJPY would return back into its consolidation. 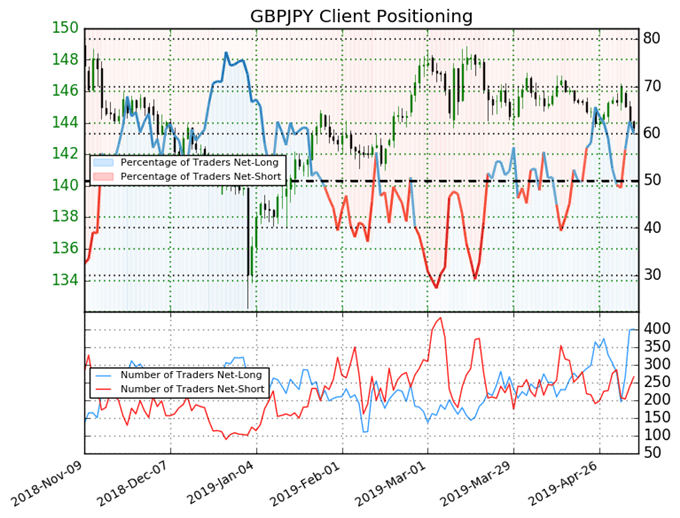 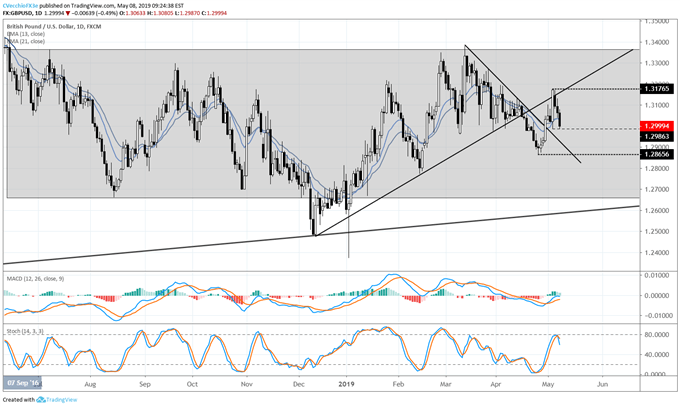 Since the bearish outside engulfing bar on June 14, 2018, GBPUSD has closed all but 14 days trading between 1.2660 and 1.3365 – approximately 94% of the past eleven-months within the range. In recent days, GBPUSD has been rejected at former uptrend support off the December 2018 low.

That rejection has morphed into a deeper pullback for GBPUSD prices, with the May 3 bullish outside engulfing bar low – a critical support level as engulfing bars represent turning points in candlestick charting – coming into focus at 1.2986.

Below 1.2986 and a bearish bias would be more appropriate for GBPUSD, and the odds would increase for GBPUSD prices to return back to their late-April low at 1.2866. Only if GBPUSD prices were able to climb through the May 3 (and monthly) high of 1.3177 would a bullish bias become appropriate. 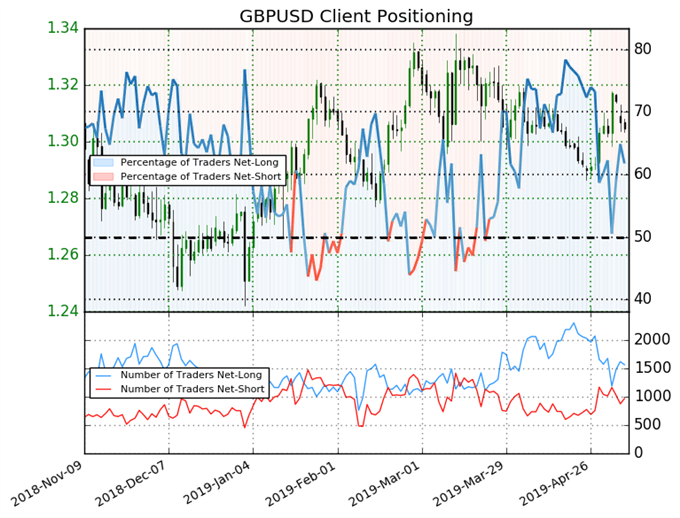