The mixed performance in USD thus translated into certain ASEAN currencies. The Philippine Peso was one of the best-performing as S&P Global Ratings raised the Philippines sovereign credit rating while offering a stable outlook. Weaker crude oil prices also eased some selling pressure in the currency as anticipated. The Singapore Dollar saw slight gains.

Meanwhile, the Indonesian Rupiah and Malaysian Ringgit underperformed. The Bank of Indonesia noted that in recent weeks rising demand for USD has weakened IDR and that it intends to maintain exchange rate stability. USD/MYR, while rising this past week, is still in consolidation mode after pausing its near-term uptrend. 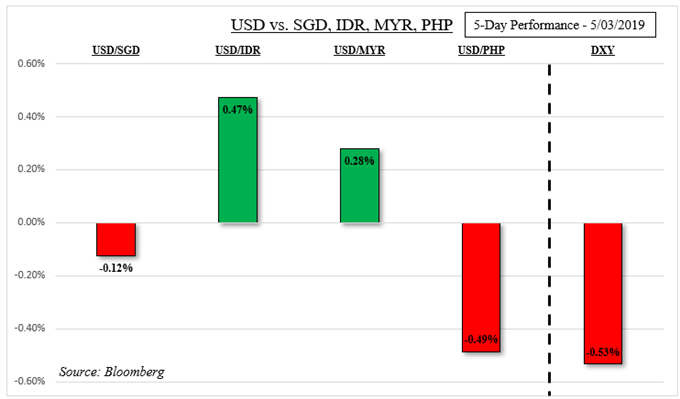 Weakness in the Malaysian Ringgit could also be in an anticipation of a rate cut this week. Most economists surveyed by Bloomberg anticipate the central bank (Bank Negara Malaysia, BNM) to cut the overnight policy rate to 3.00% from 3.25%. This would be the first action from the BNM since January 2018 and the last time it cut rates was back in 2016. If more cuts are to come, MYR may weaken further.

A couple of reasons why we might see one ahead, a few of weeks ago I noted headwinds that the nation is facing. Fears of capital flight have been in-part responsible for gains in USD/MYR as of late. Meanwhile, inflation levels are low and palm oil prices, a key export, just experienced their worst week since November after prolonged weakness since February. A surprise rate hold may throw off bears and boost the currency.

The Philippine Peso is also facing a similar situation with the Philippine central bank (BSP) which is also expected to ease its overnight borrowing rate on Thursday. But expectations aren’t as confident as those for its Malaysian counterpart. This may be due to CPI and GDP data still to come earlier in the week as markets gauge economic conditions.

BSP Deputy Governor Diwa Guinigundo noted earlier in April that they want to see inflation near the middle of their target (3.0% +- 1 percentage point) before easing. Expectations are for CPI to clock in at 3.1% y/y in April, but recent gains in crude oil prices may result in a surprise higher which could cool rate cut bets and boost PHP. The counterargument is that Governor Benjamin Diokno noted that the S&P’s decision to upgrade the nation’s credit rating could hasten a rate cut.

I will be closely monitoring MYR and PHP ahead to see what the reactions will be. You may follow me on twitter here @ddubrovskyFX for timely updates on ASEAN FX.

Be mindful of how the US Dollar performs this week as well. It has a speech from Fed Chair Jerome Powell and US CPI data to offer volatility. If Mr Powell continues to undermine rate cut bets by reiterating their tone from last week, the Greenback may find upside momentum. Meanwhile, headline inflation is anticipated to pickup from 1.9% y/y to 2.1%. This could also cool dovish expectations, boosting USD/SGD.