The Swedish Krona and Norwegian Krone had a rude awakening after US President Donald Trump tweeted fresh tariff threats against China early into Monday’s APAC trading hours. As export-driven currencies with a sensitivity to changes in global risk appetite, NOK and SEK traders will likely continue to keep a close eye on these developments. 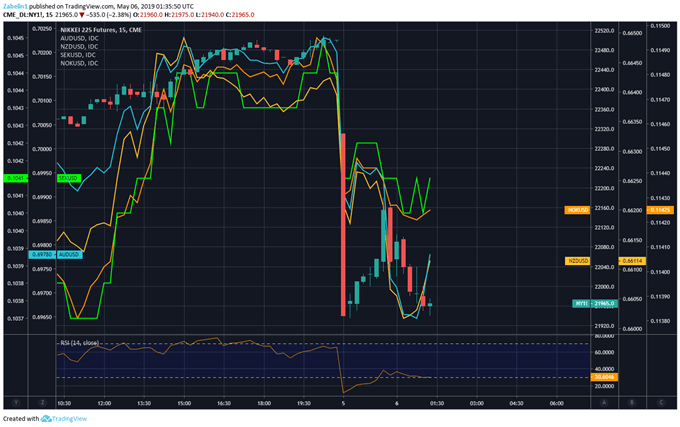 A deterioration in US-China trade relations and possible escalation of tensions could dampen an already-sour global outlook. Both the IMF and WTO – and a plethora of other institutions – have cited the trade wars as one of the major causes of global deceleration. As most central banks all over the world have pushed back their rate hike cycle, a collapse of US-China trade negotiations could force monetary authorities to delay further.

This week, Fed Chairman Jerome Powell will be giving the opening remarks at a conference on May 9 with core and headline inflation to be released the following day. The price growth data will be particularly important to monitor in the context of last week’s FOMC meeting where Powell noted that the slowdown in inflationary pressure was “transitory”.

The Fed’s adjustment to a more neutral outlook – something far less dovish than what markets were expecting – gave equity investors a nervous twitch because of the prospect of higher borrowing costs against the backdrop of a slowing global economy. Therefore, in light of the recent meeting and developments between the US and China, the CPI publication may now carry greater weight.

On Tuesday, the European Commission will be publishing its economic forecasts. Despite the small recovery in Eurozone economic activity – as seen in last week’s GDP releases – indicators have broadly continued to underperform relative to economists’ expectations. The uncertainty may be further compounded by the recent strain in US-China trade talks and the upcoming European parliamentary election (EP).

Here are a few other event risks that may elicit a notable market response in Nordic currencies:

Thursday, May 9 – EU leaders gather in Romania to discuss policy outlook for the next five years

German economic data is particularly important given its position as the so-called “steam engine of Europe” and its role in facilitating healthy economic growth with its neighbors. The meeting in Romania will be something to watch, though any meaningful follow-through with these policies is unclear given how the EP could reshuffle the institutional landscape in the EU and make these policy priorities inconsequential.

To keep up to date on political risks and how they impact markets, be sure to follow me on Twitter @Zabelin.Dimitri.

While the economic docket in Sweden remains relatively light, it is pollinated with many central bank-related event risks. On May 7, the Riksbank will be publishing its April 24 meeting minutes with the expectation of strong dovish undertones. Throughout the rest of the week, central bank officials will be participating in a series of panels and speeches that will likely reiterate the Riksbank’s position at their last policy meeting.

In Norway, industrial production will be published on May 8 with the Norges Bank rate decision on May 9, followed by a cascade of CPI indicators to be released the next day. Market participants are in large part expecting for the central bank to hold rates until possibly June where policymakers are expected to raise the benchmark rate from 1.00 to 1.25 percent with another possibly in the latter half of the year.

The central bank’s hawkish outlook is underpinned by the recovery in crude oil prices that have recently topped $73 dollars per barrel, though this revival may be undermined by a turn in sentiment. Norway’s economy is in large part dependent on the health of the petroleum sector, and any changes in global risk appetite have the capacity of significantly impacting the Norwegian economy and potentially derailing the rate hike path.