Following last week’s volatility from the Riksbank rate decision and dovish commentary, the Swedish Krona and Norwegian Krone may turn away from their economically-light docket towards external event risk. On both sides of the Atlantic, key economic data will be published in Europe and the US, with a lot of attention on the FOMC rate decision and commentary from Fed Chairman Jerome Powell.

Most of the event risk will occur in the front half of the week, including trade related developments that have also pollinated the docket and may add further tension to the export-driven Nordic currencies.

Since February, US economic data has been tending to underperform relative to economists’ expectations, even with the most recent GDP numbers beating forecasts. Upon closer inspection, the actual GDP report revealed weakness in consumption – the bedrock of economic activity in the US – while net exports showed a deceptive improvement.

Below are some key US economic indicators and central bank-related risk that may spark volatility:

The FOMC rate decision on Wednesday will almost certainly garner the attention of global financial markets. Leading up to the release, volatility may be relatively tame. Market participants may be reluctant to commit amid uncertainty over what the central bank will say on the outlook for the world’s largest economy. Sign up to get live coverage of the market reaction to the FOMC rate decision here!

On Tuesday, USTR Robert Lighthizer and Treasury Secretary Steven Mnuchin will be traveling to Beijing as part of the ongoing trade war negotiations between the US and China. This follows last week’s meeting between US and Japanese officials in an attempt to prevent another trade conflict. This comes as global demand has been yawning amidst the backdrop of Fed tightening and greater friction in international trade.

Brussels and Washington are still in the process of negotiating their own truce with an awkward divergence in foreign policy hanging over the talks. The state of global trade affairs are a serious concern to Nordic currencies due to Norway and Sweden’s economy reliance on healthy external demand. Trade tensions between the US and EU is a particularly sensitive concern for NOK and SEK.

Much like in the US, most of Europe’s economic data and major event risk is resting in the beginning of the week. Here are a few of the major – and potentially volatility-inducing – data publications this week:

While having improved since February, Eurozone economic activity has been underperforming relative to forecasts. Germany, France and Italy – the three largest Eurozone economies, respectively – have been showing political and economic weakness. France is embroiled in ongoing protests with Italy contending with a recession while its government flounders and is looking to possibly have another spat with Brussels.

In Sweden and Norway, the economic docket remains relatively light. On Thursday, Sweden’s parliament will host the Riksbank Board where officials – including Governor Stefan Ingves – will participate in a parliamentary hearing. Prior to this, Swedish PMI will be released, though its impact on the market may be relatively muted given that just last week, the Riksbank already laid out its monetary policy.

In Norway, manufacturing PMI will be published on Thursday, with peripheral indicators scattered throughout the week that may not elicit a strong reaction in NOK. On Friday, the country’s sovereign wealth fund will be publishing its Q1 results – following their recent decision to lightly divest from oil and emerging market assets. This is perhaps a gentle signal of a volatile future ahead in these sentiment-linked assets.

Year-to-date, the Swedish Krona has been the worst performing G10 currency against the US Dollar. Prior to the rise in crude oil prices, the Norwegian Krone was not far behind. If prevailing global growth trends continue, it is not outlandish to suggest NOK will slide ride back down and join SEK. This has to do with the trajectory of crude oil prices and the Norwegian economy’s reliance on it. 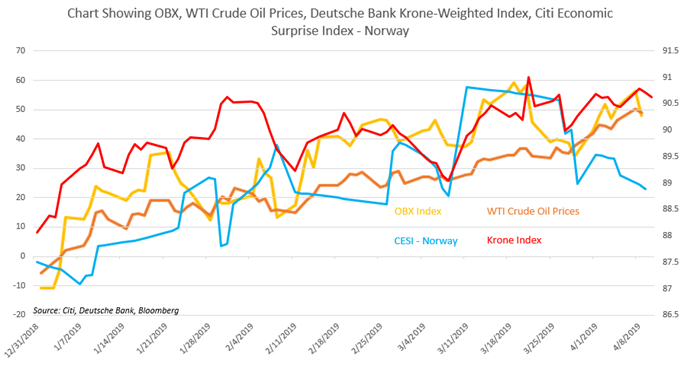