The US Dollar had its best week in two months, guided higher on multiple accounts of risk aversion which fueled demand for the highly liquid currency. This ended up pressuring its ASEAN counterparts with the Indonesian Rupiah one of the worst-performing ones. This past week, the Bank of Indonesia left rates unchanged while expanding measures to boost liquidity. Expectations of a cut have been increasing.

As crude oil prices initially climbed this week on Iranian supply disruption concerns, the Philippine Peso continued to depreciate before leveling off on Friday. Meanwhile, the Malaysian Ringgit ended mostly little changed after pronounced declines. USD/MYR, amidst general Greenback gains, hovered as the FTSE Bursa Malaysia KLCI Index rose. Capital outflows fears seemed to have subsided for the time being 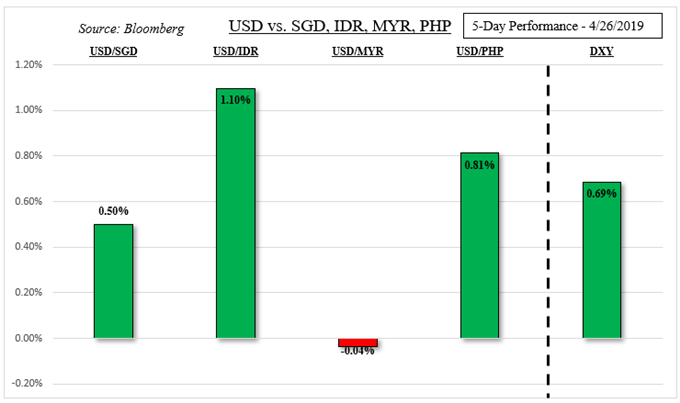 Regionally, ASEAN currencies will have Chinese manufacturing PMI data to potentially look forward to. According to the Citi Economic Surprise Index for China, data has been tending to increasingly outperform relative to economists’ expectations as of late. An upside surprise may bolster PHP and MYR given how the Philippines and Malaysia have key trading relationships with the world’s second-largest economy.

For the Indonesian Rupiah, the week ahead contains domestic inflation data. Indonesia CPI is expected to clock in at 2.6% y/y in April from 2.5% in March. The nation has been experiencing disinflation since the Bank of Indonesia took on rate hikes last year to help stabilize the Rupiah. Supportive inflation data may boost IDR as it may lessen the haste for the central bank to consider cutting rates.

A key event that can have major implications for general risk trends is the Fed rate decision. If the central bank shows hesitation in wanting to favor a cut or does not drop hints that one may come in the near-term, dovish expectations may be disappointed. This is a weakness for equities and by extension sentiment-linked crude oil prices. While such an outcome may boost USD, PHP may stabilize if oil prices keep weakening.

But that is not all, the US economic calendar docket is quite dense. Items such as the latest jobs report and the core PCE deflator, which is a favored measure of inflation by the Fed, are up. Unlike in China, outcomes relative to expectations have been tending to disappoint. While this may fuel Fed rate cut bets, it also risks denting sentiment and the S&P 500. That may in-turn boost the US Dollar and USD/SGD which tends to closely trace DXY.

You may follow me on twitter here @ddubrovskyFX for timely updates on how these impact financial markets and ASEAN FX.