As forecasted in last week’s technical outlook, USD/SEK has traded in a new range between 9.2273-9.3110. Even after Sweden’s dismal unemployment data was released, the pair spiked but closed just below the upper bound. The lack of follow-through signals a lack of confidence in the pair’s ability to trade above 9.3110 consistently and to use it as a new floor should it give way. 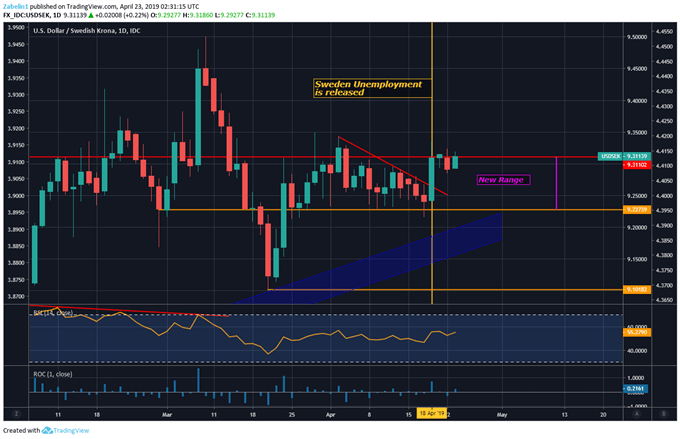 However, despite the lack of follow-through, for the past few days the pair has been trading on the cusp of the upper lip, signaling that perhaps traders are eager to try again to breaking above it again It is worth noting that the pair has repeatedly tested and broken through the upper bound, though it ultimately always retreated.

The biggest jump was on March 7 when the ECB announced its rate decision and was followed by a dismal outlook that sent Nordic currencies down and pushed USDSEK to a 17-year high. The next potential event risk that could trigger such a jump is the upcoming Riksbank rate decision and commentary on April 25. Depending on the outcome, it could send the pair beyond 9.3110 and provide enough of a boost that the pair uses it as new support.

Zooming out, the pair has been trading around a three-year high since February and is still traveling along the 2018 rising support channel. The continuous climb on the steep incline suggests a bullish bias for the pair with the fundamental outlook suggesting a continuation for the current trend for the next few months and possibly till year-end. 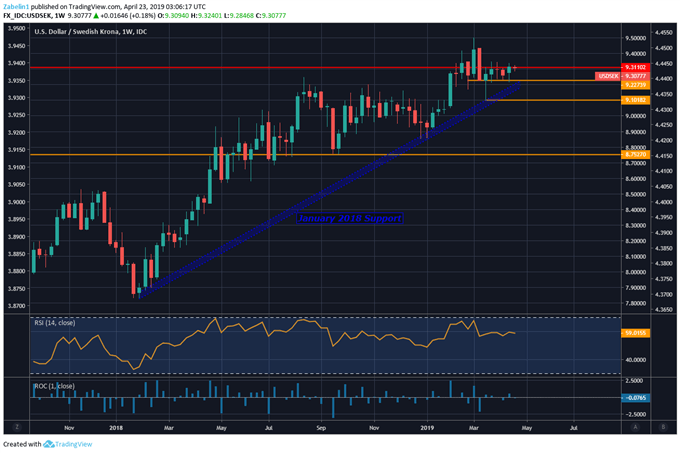 USD/NOK is once again trading around the lower bound of the upward-sloping March 2018 support (red parallel lines). The flirtation is being prompted by rising crude oil prices, particularly following yesterday’s decision by the US to discontinue Iranian oil importing waivers. The oil-linked Norwegian Krone rose on the news, promptly pushing USD/NOK lower. 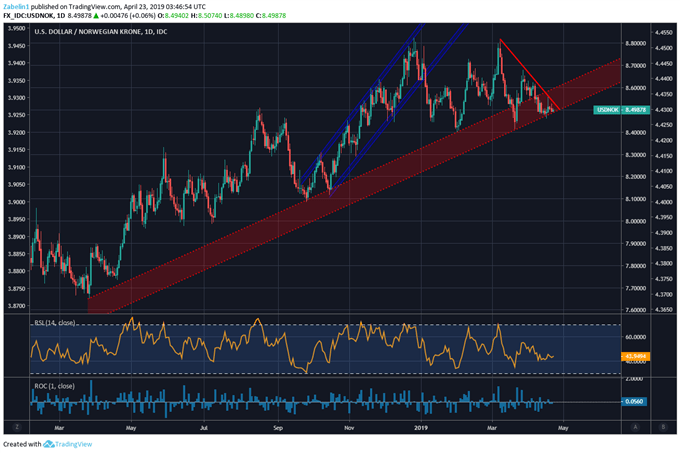 What’s telling is despite the rise in crude oil prices to their highest point since November 2019 – giving further impetus for the Norges Bank to raise rates again in June – USD/NOK continues to trade higher. The upward climb suggests an underlying bullish outlook for the pair despite the gains made in oil. A break below the 1-year support with follow would signal a critical reversal for the pair.

Coming up next is the descending resistance (red line). Since March 8, the pair has traded below it, though given the choice between breaking below support or breaking through resistance, the overall trajectory suggests a higher probability of the latter. Were the pair to break below support with confirmation, traders with long positions might find themselves covering their positions amid the reversal. 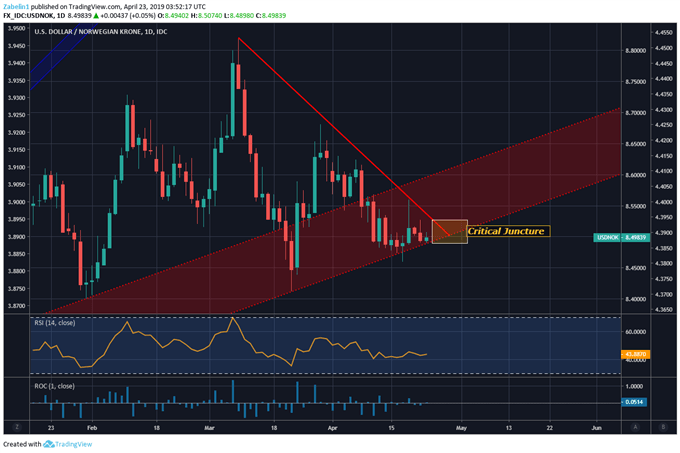