The Indonesian Rupiah was one of the best-performing ASEAN currencies against the US Dollar this past week. Unofficial preliminary results from the Indonesian General Election showed that President Joko Widodo was on course to secure a second term. As such, regional markets gained as near-term uncertainty that would have been associated with challenger Prabowo Subianto winning was priced out.

On the flip side, the Malaysian Ringgit weakened significantly. USD/MYR rose over fears that FTSE Russell could cut Malaysian debt from the world government bond index. On top of this, there have been growing concerns over capital flight. On the chart below, you can see the overall downward trajectory in the capital account (a measure of flows in and out of a nation) since 2017 amidst disinflation and slowing GDP. 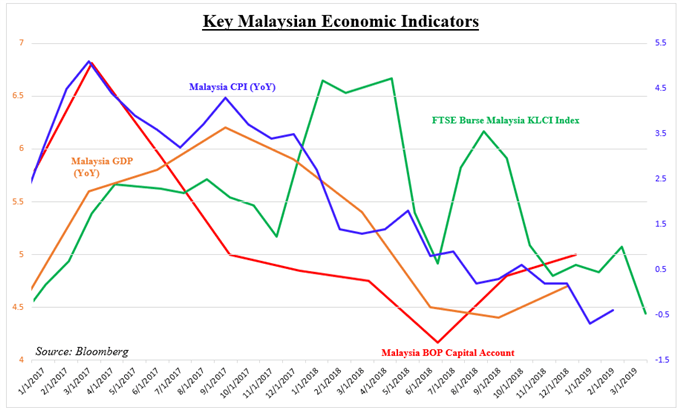 With the Malaysian Ringgit is at risk to further declines amidst a deteriorating fundamental backdrop, keep a close eye on next week’s local inflation report. CPI is anticipated to pick up to +0.3% y/y in March from -0.4% in February. We will also get Singapore prices, but USD/SGD may brush that off as it did with the latest MAS monetary policy announcement.

The Indonesian Rupiah is now setting its course for the next interest rate decision. The Bank of Indonesia is anticipated to leave the 7-day reverse repo rate unchanged at 6.00% as it continues intervening in the FX market. As such, it may step in to quell IDR declines if markets expect a cut ahead with inflation slowing. Local CPI, while within the central bank’s target, is at its lowest since 2009 after a few rate hikes in 2018.

Looking externally, what may drive MYR, IDR, SGD and Philippine Peso prices relative to the US Dollar is GDP data. Data out of the world’s largest economy has been tending to underperform relative to economists’ expectations and this may result in softer-than-expected first quarter growth data on Friday.

But be careful, if this fuels risk aversion, the Greenback may rise. As such, USD/SGD may end up trading higher. You may follow me on twitter here @ddubrovskyFX for timely updates on how these impact financial markets and ASEAN FX.