Second Quarter 2019 Forecasts for the US Dollar, Pound, Gold, Equities, and More

The first quarter of 2019 produced significant technical reversals across multiple asset crosses, setting up what should be a crucial second quarter of 2019. The sharp rebound in energy prices, gains across the boards in global equities, and a dip lower across global bond yields have produced confounding conditions for FX markets. But with Brexit, US-China trade war talks, and global growth concerns front-and-center, 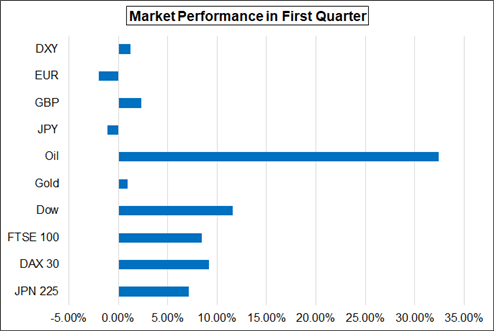 Even though the Federal Reserve took a step back from its hawkish monetary policy, their shift must be put into context: they’ve been the most hawkish central bank for several years, including in 2018, when they hiked rates three times. But the concerns that have provoked the Fed – global growth – also increase the US Dollar’s appeal as a safe haven currency.

The Euro hasn’t been at the center of attention in recent months, but it’s still being weighed down by issues growing within. Political fissures are cropping up, and in absence of fiscal leadership, the ECB is stepping into the void with another TLRO program.

The Brexit negotiations have pushed past their originally scheduled end date of March 29, and it appears that the UK parliament is stuck with limited options. While parliamentarians want to avoid a no deal, “hard Brexit,” there has been limited support for any options set forth thus far, and UK PM May’s deal has been a non-starter. More volatility is ahead for the British Pound, but the outlook may quickly turn depending upon how Brexit resolves itself.

Japanese Yen Q2 Forecast: A Haven in a World Which Needs One

The Japanese Yen enters the second quarter with a potential tailwind at its back, with global growth concerns rising and the protracted UK-EU divorce weighing on the region. Meanwhile, trade concerns are flourishing across the globe. For now, USDJPY remains in a symmetrical triangle though breakout potential is building.

Energy markets shook off their collapse in the fourth quarter of 2018 by posting exceptionally strong gains in the first quarter of 2019. With OPEC maintaining its supply cuts until at least June, and stress in the Iranian and Venezuelan supply chains, oil prices will have a positive catalyst contending with overarching concerns of a slowing global economy.

The Federal Reserve has backed off its plans to raise rates gradually, and rates markets are pricing-in a cut later this year. The price for bullion may exhibit a more bullish behavior over the coming months as a result of the path of rate hikes being stunted.

Global equities had a very strong first quarter, thanks largely to central banks stepping into markets to keep liquidity conditions buoyant. Now that global growth concerns are filtered into the conversation, it seems likely that central banks will push forward with more dovish commentary and policies, which could prove supportive for stocks into the second quarter.