Since February 28, USD/SEK has climbed over 1.6 percent and has recently reentered a key resistance range between 9.3110-9.4066. This comes shortly after the pair retreated from a sugar high that led it past a price barrier not reached since December 2016. The next obstacle before the upper band could be the inter-range resistance at 9.3714. 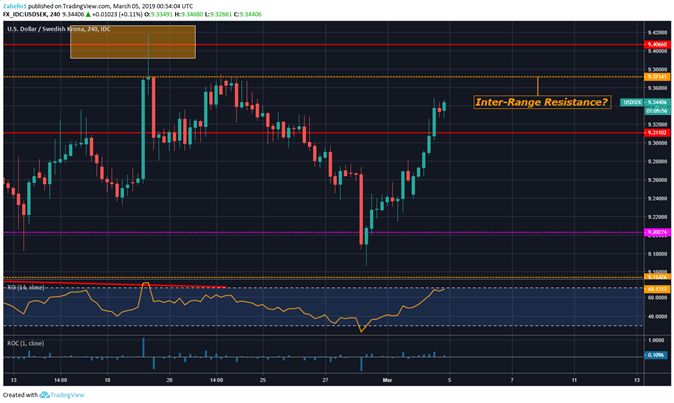 Zoomed out, the pair has closed higher for over two straight months after a painful 31 days in December. After touching the January floor at 8.8469, it blew threw several price barriers and rose over six percent. The particularly sharp spike in February followed on from CPI data indicators falling short of expectations, which led traders to believe the Riksbank would delay its intended rate hike this year. 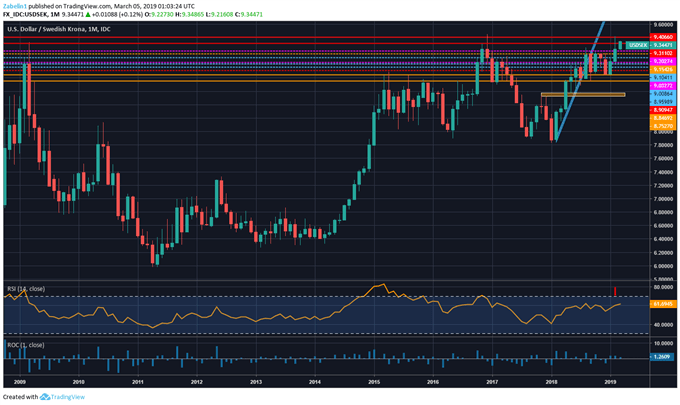 The dramatic upward movement in the pair since the start of last year appears to have been the result of US-China trade tensions and Fed tightening. Both contributed to risk aversion, consequently causing a flight of capital from the export-driven SEK to the haven US Dollar, which simultaneously was gaining a yield appeal.

Deteriorating economic data in Europe has also contributed to the pair’s rise in 2019 along with a softened outlook for growth in the Swedish economy. The connection between European economic activity and the Krona’s performance requires understanding the nature of EU-Nordic relations.

Much like USD/SEK, USD/NOK has been climbing since March 1 and is now trading above the upper bound of the 8.5596-8.6323 range. However, negative RSI divergence may signal that the pair is losing underlying upside momentum, opening the door to a potential temporary reversal. USD/NOK appears to be aiming toward 8.6673, the next possible price barrier. 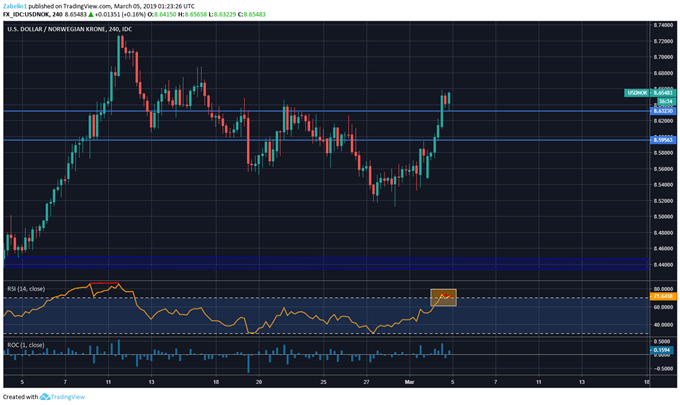 Since the tail-end of 2015 and beginning of 2016, USD/NOK was trading in downward-inclined channel until approximately July of 2018 when the pair broke above the upper bound. Confidence in the upward trajectory was confirmed when USD/NOK retested the former resistance and continued trading higher. Since October, the pair has risen over six percent.

The fundamental outlook suggests USD/NOK will continue to rise if global demand wanes and European affairs continue to deteriorate. To understand why, read up on the Norwegian Krone here.

As outlined in the weekly fundamental forecast for Scandinavian currencies, factors from abroad will likely be the key influencers for USD/SEK and USD/NOK this week. European data – such as Italian GDP and several Markit reports – may cause the pairs to edge higher if they underperform. This comes on top of the ECB’s rate decision and several key US economic reports which may cause investors to flock to the US Dollar.