What Could be the Market Impact of Escalated India-Pakistan Tensions?

APAC equities and risk-on assets aimed lower in Wednesday’s Asia trading hours as news crossed the wires that India-Pakistan tensions dramatically escalated while risk-off assets such as the Japanese Yen and US Dollar gained. This preceded the news that denuclearization talks between Donald Trump and Kim Jong-Un ended earlier than expected, adding additional geopolitical risk to the docket. 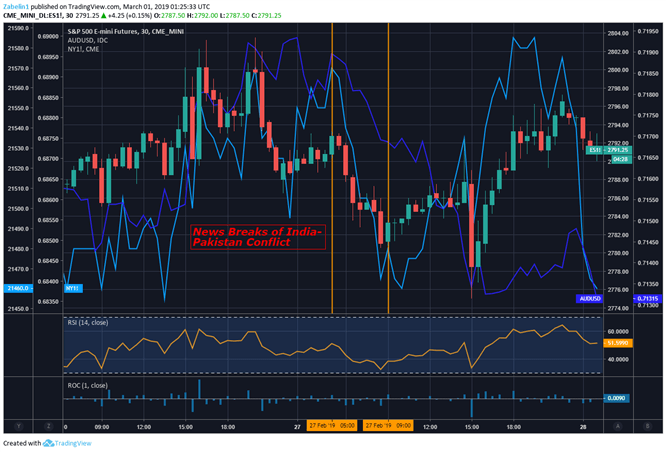 Tensions between the two countries have always remained high since the 1947 Partition that resulted in decades of intermittent conflict and perpetual strain. On Wednesday, news broke that Pakistani jets had shot down two Indian air force planes and subsequently arrested one of the pilots after his crash-landing in Pakistani-held territory in Kashmir. Officials in Islamabad claim it hit targets on its side of the border.

This follows an airstrike New Delhi orchestrated against a terrorist network base in Pakistan which recently claimed responsibility for the killing of 40 Indian police officers in Pulwana on February 14. This frustrated Indian officials who for years have accused politicians in Islamabad of harboring terrorists. The bombing runs by Indian airplanes was the first time since 1971 that had India ventured into Pakistani airspace.

What adds to the international tension surrounding this affair is the fact that both countries possess nuclear capabilities. Fears of destabilization over the use of such a weapon have always remained a security concern for world leaders. Tensions escalated further when reports surfaced of Indian and Pakistani soldiers exchanging fire on at least three occasions at the border in Kashmir.

As a result of the conflict and fears over potential escalation, the government decided to close its airspace, which disrupted travel over the area and delayed thousands of passengers’ flights. There are potentially more ways in which this political dispute can end up disrupting economic activity in the region and internationally.

If you’re interested in learning more about how politics affects markets, sign up for my weekly webinar here!

WHAT’S NEXT FOR INDIA AND PAKISTAN?

Recently, news broke that Pakistan will return the captured pilot as a peace gesture to the Indian government. This will help defuse the immediate tensions, but this in no way suggests that the pressure will be completely dissolved and necessarily be reignited.

Indian Prime Minister Narendra Modi will be facing a general election in the Spring which may complicate de-escalation on both sides. As a member of the nationalist Bharatiya Janata Party, Modi will likely have to display strength and resolve against Pakistan’s actions, potentially leaving him less open to compromise. For Modi, the latter may be seen as weakness and could cost him political points and voters.

In 2016, 20 Indian solders were killed by Jaish-e-Mohammed, a terrorist organization residing in the disputed territory of Kashmir. As a response, Modi sent special forces into the area and implemented ‘surgical strikes’ against the network. While the incursion may not have yielded many military benefits, it did reward Modi’s political standing at home.

It is possible that he may use a similar tactic to secure a key vote that could lead to his reelection as Prime Minister. If he uses this kind of approach and takes a hard stance against Pakistan, relations between the two could deteriorate. Officials from both sides have expressed interest in the US helping to reduce tensions between them.

However, this might add to the problem because of President Donald Trump’s unorthodox approach to politics, which deviates from conventional diplomatic tactics. His style often relies on cultivating a nationalist sentiment in his voter base through relying on emotionally-charged rhetoric. He might relate to Modi in this regard, which could in turn alienate Pakistan and undercut the US’ ability to broker a peace deal.

Indeed, Trump has to be careful not to make Pakistani officials feel betrayed. The Economist writes that “Pakistan is playing a pivotal role in Afghan peace talks by calling for negotiations by the Taliban, which it has long supported”. If the talks are undermined, that could derail Trump’s plan to bring home 14,000 troops from the region, which might in turn hurt him politically in the 2020 election.

China may also have a dog in this fight and could be forced to weigh in on the issue. Islamabad and Beijing have grown closer in recent years, with the former’s total imports constituting 27% from the latter. China also has had border disputes with India and could be dragged a debacle at a time when it already has a lot on its plate e.g. trade wars and slower domestic growth.

The eruption of this conflict has also come during a time when global markets are beginning to yawn. Despite a breakthrough on the US-China trade war front, markets only shyly edged higher on a fundamental theme that has been dominating headlines for over a year. When an asset fails to rally on positive outcomes but disproportionately falls on negative ones, that speaks of underlying weakness.

If tensions between India and Pakistan continue to rise, sentiment-linked assets like the Australian and New Zealand Dollars along with equities may feel some pain. Conversely, the Japanese Yen, US Dollar and Treasuries might rise as haven demand increases. However, the Yen – when paired with the Swiss Franc – might fall because of the regional risk associated with the Japanese currency’s proximity to the conflict.