The Swedish Krona will be eyeing several key economic reports coming out of the Scandinavian country this week. Most notably is GDP, manufacturing PMI, retail sales and consumer confidence. Forecasts for quarter-on-quarter growth stand at 0.6 percent with the previous showing a contraction at 0.2 percent. For over a year, Sweden’s economy has been underperforming relative to economists’ expectations according to the Citi Economic Surprise Index. 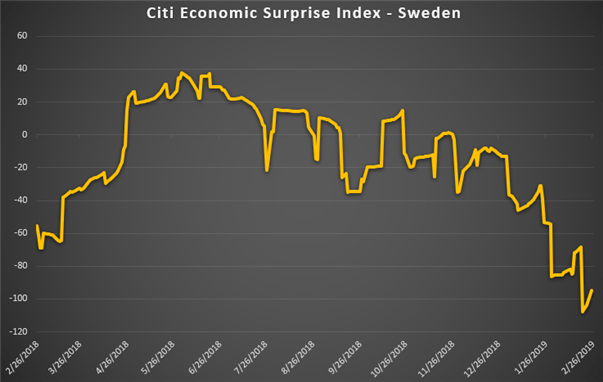 However, looking at Sweden’s benchmark OMX equity index since January would give the impression that all is well in the Nordic country. Since the start of the year, it has climbed over 15 percent but may start sputtering soon as negative RSI divergence suggests underlying momentum is fading. The Riksbank’s dovish disposition has helped push equities higher with investors taking advantage of cheap credit. 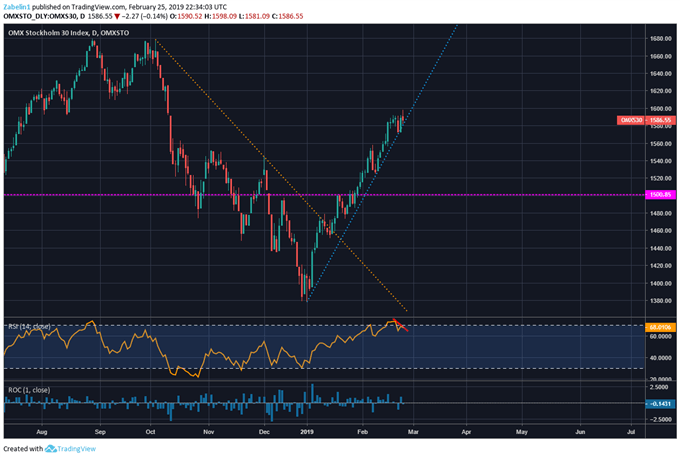 However, this has also created a problem of high household indebtedness which Riksbank officials have repeatedly stated is a central concern. If interest rates rise, it could cripple households that are heavily laden with debt and could spark a stark slowdown. Policymakers are also concerned with political and economic developments abroad that could weigh on the export-driven Krona should investor sentiment sour.

A cascade of economic data out of the US and EU will be hitting markets this week which could affect SEK. There is also Fed Chairman Jerome Powell’s congressional testimony and a slew of US data that is scheduled to be released over roughly the same span of time. Depending on the magnitude of the reports, it could potentially alter Fed monetary policy which would ripple out into the global economy.

Since January, USD/SEK has risen over five percent, with reports showing the Swedish Krona as the worst performer out of all the G-10 currencies. The fundamental outlook for Nordic assets suggests this trend will continue throughout 2019.

Leading up to the event risks this week, USD/SEK may trade within spitting distance in the lower bound of the 9.3110-9.4066 trading range. If GDP and other major indicators fall short of expectations, the pair could extend beyond 9.4066 as an initial reaction. This dynamic may be extended further if US economic data outperforms expectations, giving the Fed impetus to raise rates which could push the pair higher. 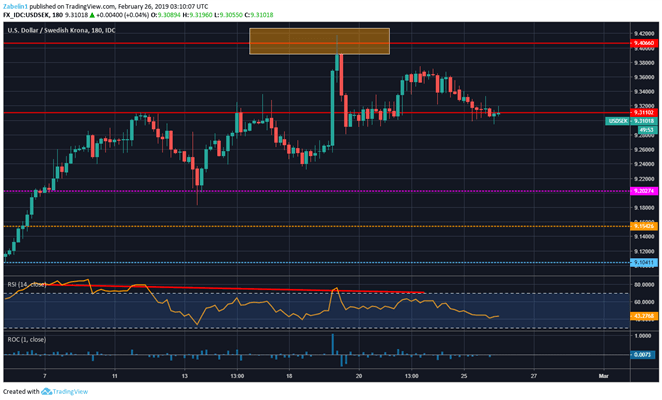