USD/SEK and USD/NOK this week may experience higher-than-usual volatility amid a slew of market-moving developments. Earlier today, US President Donald Trump tweeted that the March 1 deadline for imposing tariffs on $200 billion of Chinese goods will be delayed. As export-driven currencies, the Swedish Krona and Norwegian Krone rallied due to their nature of being particularly sensitive to changes in sentiment.

Despite the positive news, there are now growing concerns that a potential revival of an EU-US trade conflict might re-emerge. This follows the report President Donald Trump received on the potential security threat posed by importing autos. If the President declares victory in China, he may turn his eyes to the EU. European policymakers have already anticipated this and have said they are ready to target Caterpillar and Xerox if Tariff Man strikes.

There is also growing concern over the outcome of Brexit and its effect on European markets. Several Riksbank officials have stated they are closely monitoring the situation in the UK and have cited risks from abroad as a key force influencing monetary policy. More on that later. Nordic traders have an eye on Europe because of the unique political economy of EU-Nordic relations.

USD/NOK and USD/SEK traders will be watching Fed Chairman Jerome Powell’s congressional testimony on Tuesday and Wednesday as well as his speech on Friday. Investors from all around the world are anxiously awaiting to hear any comments that could provide greater insight on the Fed’s outlook for policy.

A cascade of European economic data scheduled to be released at the tail-end of the week may leave the Krona and Krone vulnerable. Most notably is GDP in France, and manufacturing PMI for Germany, France and Italy, the three largest Eurozone economies. Recently the trio have been slowing more than expected with the latter having slipped into a technical recession with the other two not far behind.

SEK traders are likely all anxiously waiting for the release of Sweden’s GDP and retail sales data. Economic news flow out of the country has been underperforming relative to economists’ expectations according to the Citi Group Economic Surprise Index. Riksbank officials will be eager to see the numbers to determine if conditions at home are sufficiently fortified enough to implement a rate hike with all that’s going on abroad.

However, the release of the minutes from the February 13 policy meeting revealed that domestic weaknesses may weigh on the Riksbank’s intended rate hike. Similar to the December meeting minutes, many policymakers are concerned over household indebtedness and Riksbank officials expressed their disappointment with the weaker-than-expected Krona.

In Norway, manufacturing PMI and unemployment will likely be key points of interest for the Norges Bank. Like the Riksbank, Norwegian policymakers are intending on hiking rates once this year. The monetary policy from both Nordic countries following a similar rate-hike path to the ECB.

Since early January, the Swedish Krona has fallen over five percent against the US Dollar. More recently, USD/SEK has closed lower – as expected – after the pair entered overbought territory. The outlook for the week ahead offers a mixed bag. On the one hand, positive trade war news has weighed on the pair and boosted SEK as investors became more risk-loving.

Conversely, event risk in the US may offset the pair’s downward movement. In addition to Powell’s congressional testimonies, a slew of market-moving economic data will be released around the same time. To catch the market-reaction, sign up for the live-event webinars below:

USD/SEK may be trading between either side of 9.3110 as key domestic and international economic data crosses the wires. If Swedish GDP and retail sales outperform, it will likely push the pair lower. However, if data out of the US is better than expected, it may give the Fed impetus to raise rates and could therefore turn investor sentiment sour and push the Dollar up. Consequently, the pair might rise and erase any previous losses. 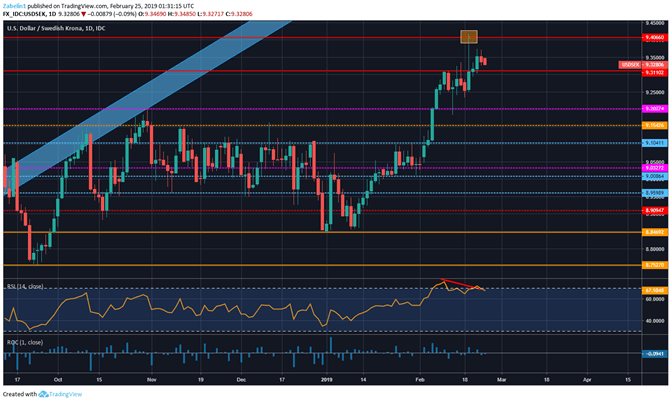 USD/NOK will also likely experience a similar struggle. On Norway’s economic docket, manufacturing PMI and unemployment data is scheduled to be released and could move the pair. Depending on the magnitude of the data, the pair could dip as low as 8.5445 or rise as high as 8.6417. 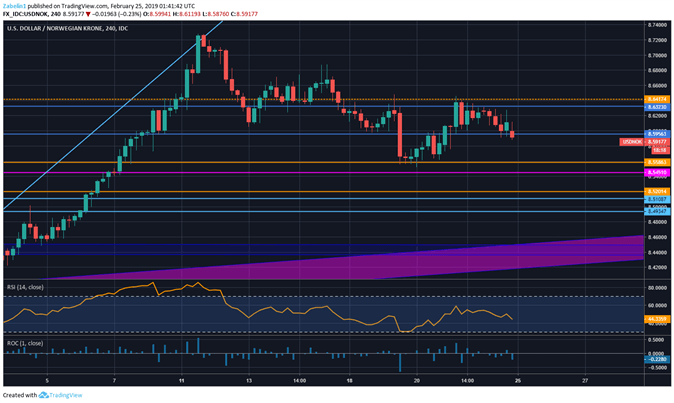 USD/NOK will likely continue to dip as fears of the US-China trade war dissipate and send the export-driven Krone higher. But following the initial risk-on spike, the pair may move cautiously as key data this week unfolds.