USD/BRL traders this week have three crucial events to watch out for: Brazilian GDP, manufacturing PMI and the Fed Chairman’s Congressional testimony. This will be coming in the same week that President Donald Trump announced an extension of the March 1 deadline for imposing tariffs on Chinese goods. Risk-on assets initially rallied, but then took a hit when news crossed the wires from China’s state-run news agency that US-China trade relations may not be as steady as previous headlines suggested.

Brazilian quarter-on-quarter GDP is expected to be released on February 28 with forecasts of 0.2 percent with the previous at 0.8 percent. Recently, economic data coming out of the country has not been particularly impressive. However, forward-looking and coincident indicators have been steadily rising.

This a reflection that investors are betting on Brazil and hoping that Bolsonaro can push through his bold pension reform. Investors will also likely be eyeing manufacturing PMI data that is scheduled to be released on March 1. Other economic reports including foreign direct investment and local inflation data which may also warrant BRL traders’ attention.

The President’s proposed structural changes has pushed the Brazilian Real over 10 percent against the US Dollar since September. The local currency is forecasted to be the best performing emerging market currency in 2019 almost entirely due to markets anticipating the pension reform passing. The country’s bloated retirement benefits has been the prevailing reason why markets have remained hesitant to invest in Brazilian assets.

Fed Chairman Jerome Powell will be testifying to Congressional committees in the Senate and House on Tuesday and Wednesday. He will also be delivering a speech on Friday outlining economic developments and longer-term challenges. Market participants will be tuning in and searching for any comments or indications regarding the Fed’s outlook on policy.

Furthermore, US GDP, consumer confidence and ISM data along with other key economic indicators will be released over roughly the same span of time. If the reports come in better than expected, the Brazilian Real and other risk-on assets may take a hit because of anticipation that the Fed now has more reason to raise rates. conversely, risk-off assets like the Japanese Yen and US Dollar may rebound.

Leading up to these potential market-moving events, USD/BRL may continue trading between 3.7108-3.7625. The pair may trade cautiously within this range as traders anxiously wait for the Fed and Brazilian GDP. If the latter comes in short of expectations and the pair barely move, it might indicate that they are more driven by news of the pension reform and/or US data and Fed monetary policy than by Brazilian data. 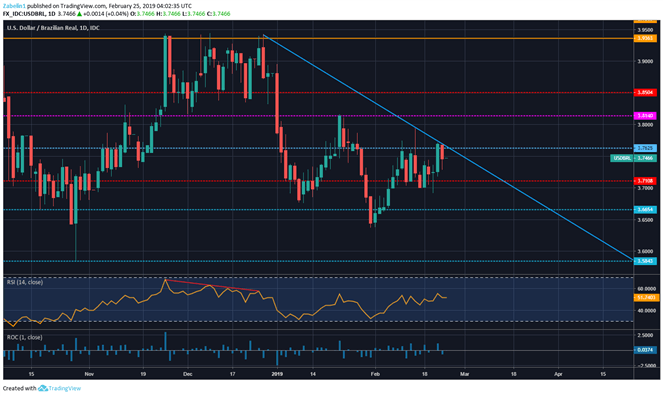 There is also risk emanating out of Europe. Several important economic reports are scheduled to be released out of three largest Eurozone economies. If performance in Germany, France and Italy stalls and shows greater vulnerability, it might weigh on risk appetite and cause investors to flee the Real and run into the arms of the Greenback.