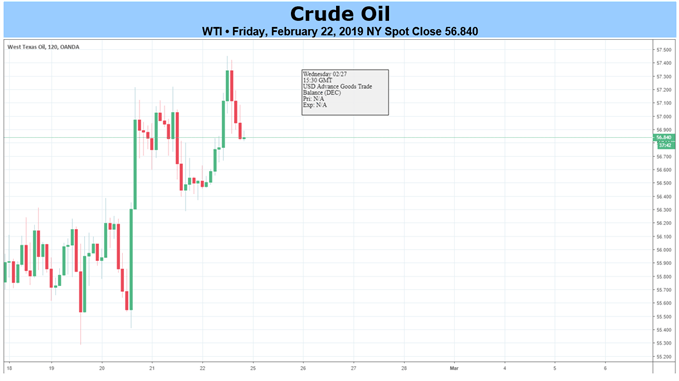 Oil remains bid even though U.S. crude production climbs to a record high in February, and recent price action keeps the topside targets on the radar as the Relative Strength Index (RSI) flirts with overbought territory.

Looking for a technical perspective on the Crude Oil? Check out the Weekly Crude Oil Technical Forecast.

It seems as though the rebalancing efforts by the Organization of the Petroleum Exporting Countries (OPEC) and allies will continue to bear fruit as crude take out the December-high ($54.55), and the ongoing adjust on the supply-side is likely to keep oil prices afloat as energy exports from Iran and Venezuela remain battered by the U.S. sanctions.

It remains to be seen if OPEC and its allies will extend the six-month agreement at the next meeting in April amid the mixed rhetoric coming out of Russia, but the current environment may foster a larger correction in crude prices amid the tepid pace of growth in non-OPEC production.

Fresh updates from the U.S. Energy Information (EIA) show U.S. crudeweekly field output climbing to a record 20,000K b/d in the week ending February 15 after holding steady at 11,900K b/d for the past four consecutive weeks. A further uptick in U.S. output may become a growing concern for OPEC and its allies, but so far, the figures indicate a limited threat of non-OPEC supply, with signs of stagnant U.S. supply likely to instill a constructive outlook for crude especially as an inverse head-and-shoulders formation appears to be taking shape.

At the same time, recent developments in the Relative Strength Index (RSI) suggest the bullish momentum may gather pace as the indicator flirts with overbought territory, with a break above 70 raising the risk for higher oil prices as the oscillator continues to track the upward trend carried over from late-2018. Sign up and join DailyFX Currency Analyst David Song LIVE for an opportunity to discuss potential trade setups! 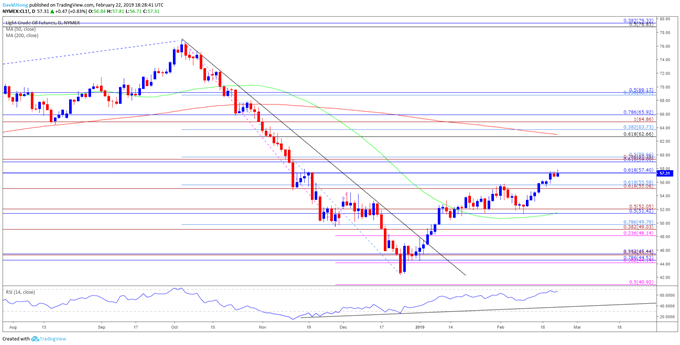