USD/BRL dipped heading into Brazilian trading hours after news broke that President Jair Bolsonaro fired a member of his cabinet, sparking concerns that the leader’s much anticipated reforms may be in jeopardy. The Brazilian Real has climbed over 11 percent since September as investors have put their hope in the President’s ability to overhaul the bloated pension system. 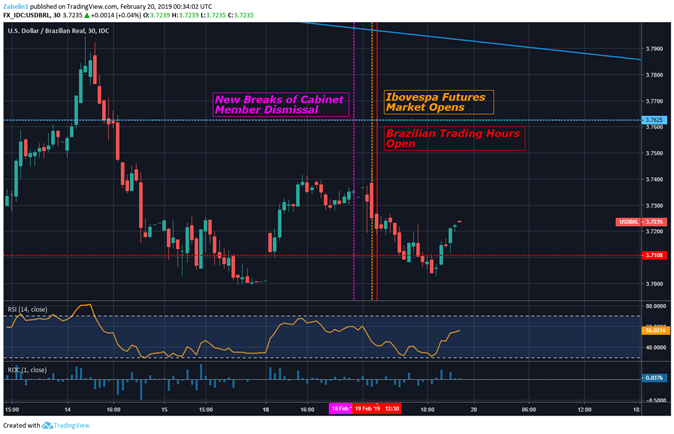 The cabinet rift emerged because of Secretary-General Gustavo Bebianno’s involvement in a scandal revolving around the misuse of campaign funds. The sharp market reaction indicates perhaps just how sensitive investors are to any potential triggers that could derail the pension proposal. There also appears to be other signs of fragmentation within his inner circle that rattled the Real and Brazilian Ibovespa equity index.

This also demonstrates how political developments can have meaningful impacts on markets. If you’re interested in learning how these kinds of elements could be translated into asset reactions, be sure toregister for my weekly webinar!

A bill outlining Bolsonaro’s key reforms will be presented to Congress later this week, but with Bebianno’s dismissal, it might become an obstacle. If risk surrounding the possible death of the reforms rises, it will likely exert downward pressure on the Real and equity index as investors become more skittish. Bullish sentiment on Brazilian assets is mostly riding on the government’s ability to pass the pension reform.

This can be seen in Brazil’s coincident and leading economic indicators – such as consumer confidence and foreign direct investment (FDI) – which measures the sentiment regarding the future of Brazil. Keeping an eye on developments relating to the status of the pension reform might be a prudent approach to trading the Real. The currency appears to respond most sensitivity to this particular factor.

USD/BRL in the meantime appears to be cautiously trading between 3.7108 - 3.7625 as investors attempt to gauge the political landscape. Other more immediate factors that may move the pair are tomorrow’s release of the FOMC meeting minutes, and the publication of Brazil’s month-on-month IGBE Inflation IPCA-15 report. It is likely the pair will trade between this range until a bullish or bearish trigger pushes the pair beyond its bounds. 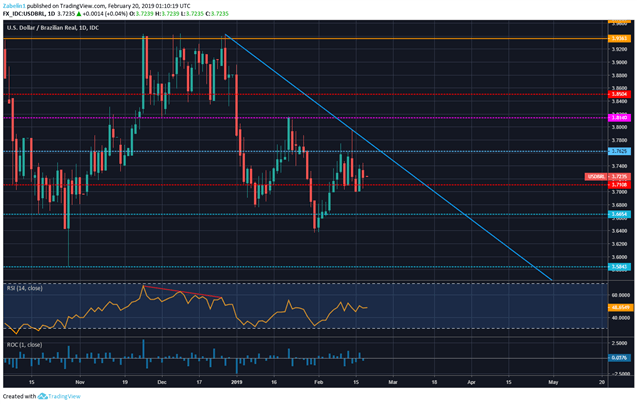