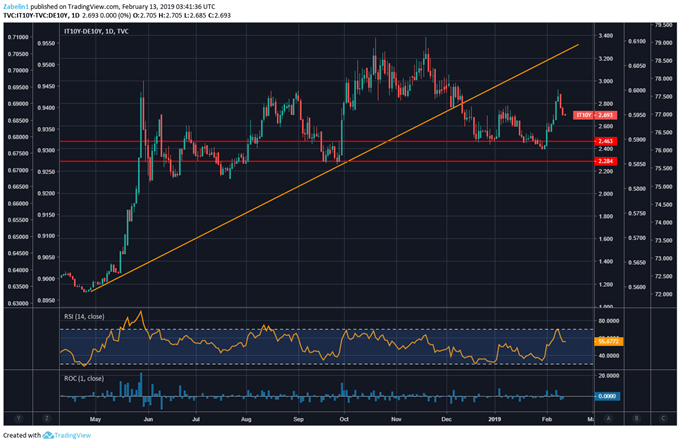 EUR/USD May Move on Industrial Production and Bond Auctions

After witnessing disappointing data emanating from the Eurozone’s three largest economies – Germany, France and Italy – the Euro may drop when euro area industrial production data is released. The last dispatch showed -1.7 percent and the current forecast stands at -0.4 percent. Since the end of 2014, reports from this indicator have been on a downward trend with particularly sharp declines in 2018.

This comes on the heels of Italy entering a technical recession, Germany wrestling with painfully slow growth while France attempts to quell economically-disruptive riots. Meanwhile, broader regional risk is rising as Eurosceptic parties are gathering momentum and organizing ahead of the European Parliamentary elections in May. Meanwhile Brexit remains an issue as policymakers from both sides scramble to make a deal.

The growing risk associated with European-denominated assets can be most seen in the yield spread between Italian and German 10-year bonds. Since April, the spread has widened over 100 percent, indicating investors’ growing hesitancy in lending to Rome vs Berlin. Despite a small respite, the dominant trend remains high as regional risk induces investors to be more risk-averse.

Tomorrow, the Italian and German governments will be hosting their own respective bond auctions. This will be a key event to monitor to gauge how investors feel about European assets, particularly government bonds that are generally viewed as safer alternatives relative to riskier asset classes e.g. equities. Given the economic climate, demand for such assets may dwindle as downside risks rise.

The previous bid-cover ratio – a measure used to gauge demand for securities – for 3-year and 7-year Italian bonds came in at 1.49 and 1.64, respectively. Across the spectrum, demand for Italian assets remains tepid. It’s telling that other euro area assets have recovered smartly since the so-called Great Recession whereas both Italian bonds and stocks have been treading water.

The German 30-year note previously drew a bid-cover ratio of 1.106 and is the latest point in a downward slope after the most recent peak at 2.010. The decline could imply that appetite for even German bonds – arguably one of the safest European assets – is weakening, perhaps signaling that investor sentiment toward Europe is turning sour.

Following these bond auction and industrial production data release, EUR/USD might edge toward 1.1305 if the data undershoots and demand for German and Italian bonds remains weak. The pair will likely struggle to retest the 1.1478 resistance as fundamentals weigh the Euro down. Short-term resistance and support might stand at 1.1358 and 1.1305, respectively. 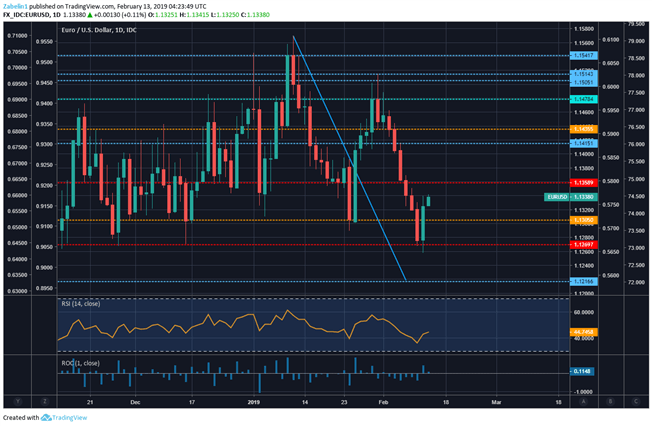