Looking for a technical perspective on Equities? Check out the Weekly EquityTechnical Forecast.

The Dow Jones Industrial Average and its counterpart in that of the S&P 500 will take their cues largely from non-scheduled data next week. As earnings season winds down, sentiment and price action will turn once again to the larger overarching themes that equities have faced for months.

Trade wars remain the paramount concern with US and Chinese officials scheduled to meet in Beijing on Thursday and Friday. The talks are critically important for progress as the 90-day deadline approaches expiration on March 1st. Further, President Donald Trump confirmed a report that he will not meet with Chinese President Xi Jinping before the deadline. The lack of a face-to-face meeting between the two Presidents places increased pressure on trade officials from both sides. 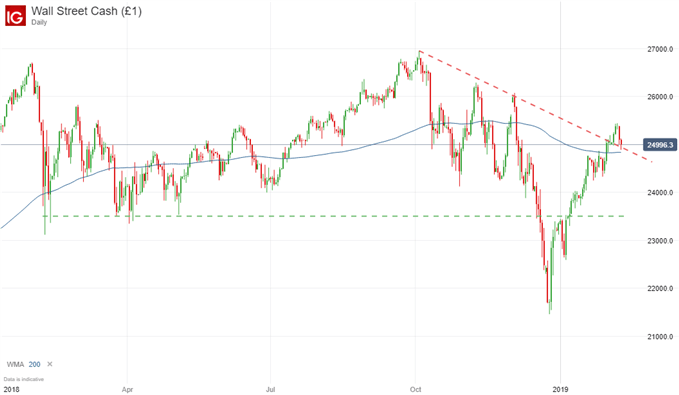 The Japanese Nikkei 225 will look to Wednesday’s release of Q4 GDP data for the country. Japan’s economy has faced disappointing growth figures in recent quarters and hopes to avoid another one with the data release for the most recent quarter. A surprise to the topside could stoke some bullishness but with economists across the globe warning of slowing growth, the risk of a miss seems greater than that of a surprise. Similarly, a miss would only confirm global growth concerns and dent equity sentiment further.

View our Economic Calendar for key data releases like Japanese and German GDP due next week. 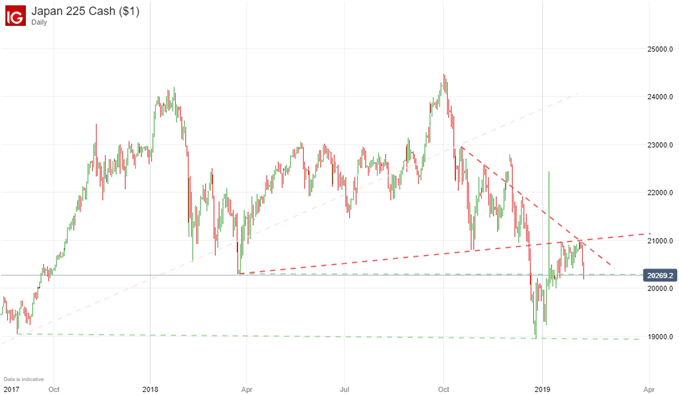 The German DAX 30 awaits GDP data due on Wednesday. Technically speaking, two successive quarters with a fall in GDP constitutes a recession. At present, a Reuters poll forecasts German GDP to climb by 0.1% after receding -0.2% last quarter. With risks skewed to the downside, the data point may be the most critical piece for the DAX but will likely have a considerable impact on all other European equities. Long referred to as the “powerhouse” of Europe, a recession would not bode well for the continent’s outlook. Broader growth concerns and widespread European equity weakness could then spread to the US equity session. 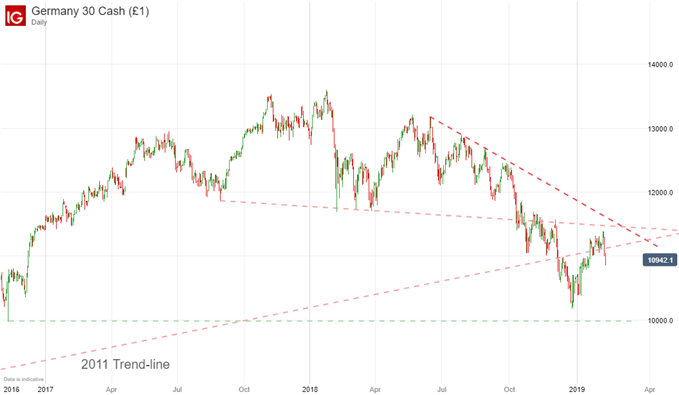 Another headwind facing the DAX is the possibility of US auto tariffs. The Trump administration has considered such tariffs in an effort to rebalance trade between the United States and the European bloc. German automakers account for 10-12% of the DAX’s market cap and are a critical industry for the country. Should such tariffs be imposed, it could have considerable downward pressure on the DAX and US indices as it would open a new trade war front for the United States.