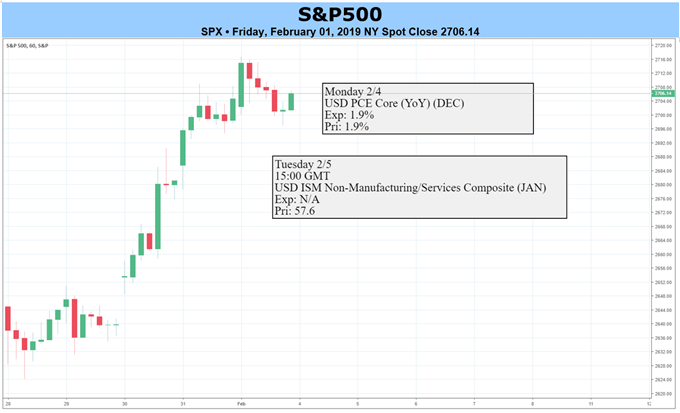 Looking for a technical perspective on the Equities? Check out the Weekly Equities Technical Forecast.

Earnings and Trade Wars: Themes for the Dow Jones

US stock markets have enjoyed an incredible run in January as strong earnings, positive progress in US-China trade negotiations and a dovish Fed work in conjunction to push the S&P 500 above 2,700 once again. Apple,Amazon,Microsoft and Facebook were some of the headline earnings last week and the positive sentiment they garnered could provide some buoyancy moving forward. Similarly, the firmly dovish Federal Reserve helped to spark a rally on Wednesday. As February progresses, these themes should provide a consistent tailwind for US indices.

In the week ahead, Alphabet’s Google on Monday and British Petroleum on Tuesday will be the most notable earnings. Given their size, a large move either direction could drag an entire index lower. Caterpillar was guilty of the last week and the Dow was subsequently outpaced by the S&P 500. That said, a miss may be more readily accepted by the broader market given the Fed’s stance and weakening Dollar. 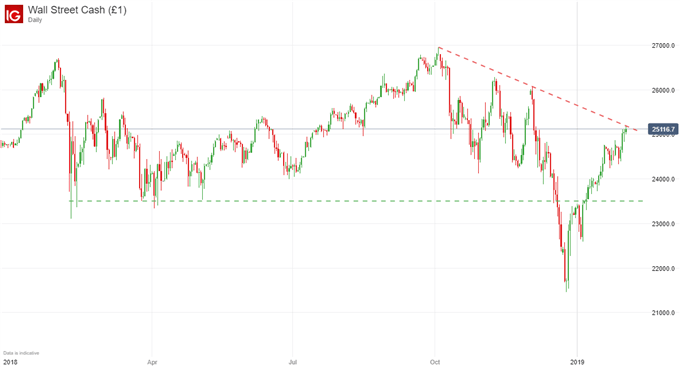 Should the US Dollar continue to weaken, it will provide a lasting tailwind for US equities as exports become more affordable to other nations and corporations reap the rewards. With that in mind, the US Dollar’s performance in the weeks ahead may command increased control over US indices as market participants digest the Fed’s comfortably dovish stance and what it means for the Dollar.

FTSE 100 and the Bank of England

The FTSE 100 will look to something other than Brexit for a change, as the Bank of England is scheduled to announce its decision on the bank’s central interest rate Thursday. The announcement will also be accompanied by the institution’s inflation report which is likely to include the different Brexit-scenario’s impact on the bank’s outlook. Thus, the UK-EU divorce proceedings will once again make their way to the forefront of fundamental themes for the FTSE 100. 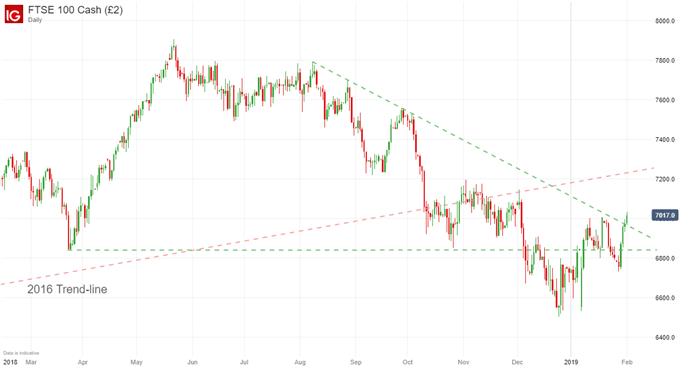