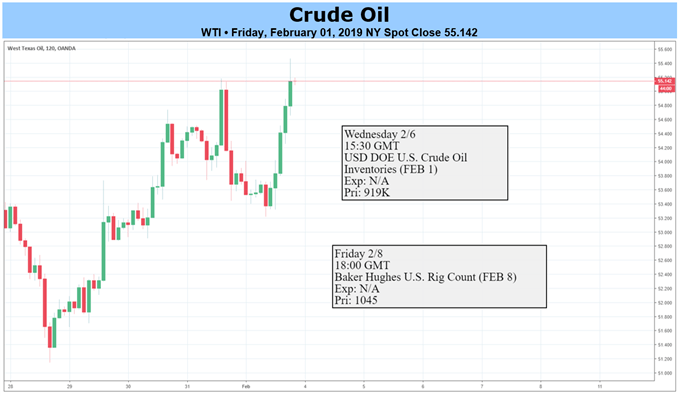 Oil prices may continue to catch a bid as the Organization of the Petroleum Exporting Countries (OPEC) remain committed in rebalancing the energy market, and recent price action keeps the topside targets on the radar for crude as it takes out the December-high ($54.55).

Looking for a technical perspective on the Crude Oil? Check out the Weekly Crude Oil Technical Forecast.

Fresh comments from Saudi Arabia Energy Minister Khalid Al-Falih suggest OPEC and its allies will continue to curb production even as the U.S. imposes sanctions against Petróleos de Venezuela, S.A. (PDV S.A.) as the region pledges to reduce output ‘well below the voluntary cap’ during the proposed six-month period.

The efforts to defend oil prices may continue to bear fruit as updates from the U.S. Energy Information Administration (EIA) show weekly field production holding steady at 11,900K during the week ending on January 25, and the limited threat of non-OPEC supply should keep crude afloat especially as Russia Minister of Energy, Alexander Novak¸ endorses a price range of $55-65bbl.

With that said, OPEC and its allies may continue to push for higher oil prices ahead of the next meeting in April, and the current environment may fuel the rebound from the December-low ($42.36) as an inverse head-and-shoulders takes shape. Sign up and join DailyFX Currency Analyst David Song LIVE for an opportunity to discuss potential trade setups! 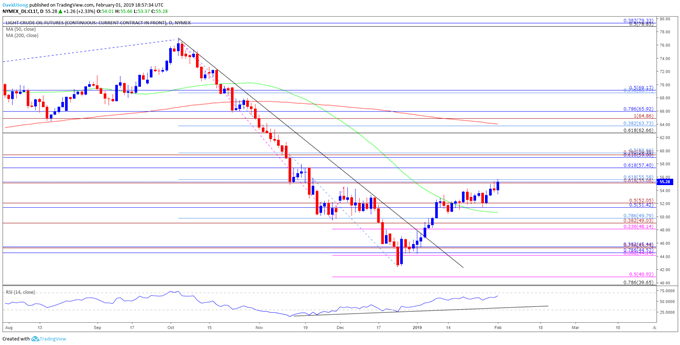