Motivation for Bulls Just Looking for a Reason to Continue

In 'bullish' markets, encouraging news will gain more significant traction while disappointing headlines will more readily be discounted. That seemed to be the case for speculative assets this past session, which closed out the month with unmistakable strength. While the tempo varies from asset to asset, there is an unmistakable bid across the markets that I typically monitor for a read on 'risk'. Most notable was the performance from US indices. Having already surpassed the midpoint of their October-to-December tumble earlier this week, the benchmark American measures were stretching for further highs through Thursday's climb. In fact, the S&P 500 extended its January run to 7.9 percent. That is the best single-month performance from the index since October 2015 and the best bullish run for a January since 1987. That charge is difficult to ignore, but it is certainly a qualifier to consider that the best opening month for a year in three decades followed the worst closing month (December) since the Great Depression. Volatility begets more volatility. That said, we still need a fundamental step to give bulls something tangible with which to work. Monetary policy is still a contribution, but earnings proved the more overt factor this past session. Following the strong showing from Facebook Wednesday after the bell (with uneven help from Microsoft and Alibaba), we opened Thursday will a jump. After the close this past session, e-commerce giant Amazon handily beat expectations with a $6.04 EPS (earnings per share) versus $5.59 expected - though the $9 billion decrease in revenue forecasts should be considered a serious caveat. If the market is looking for fuel for its bullish fire, it can selectively capitalize on the headline figures. A closer look at AMZN and other firms' numbers though could raise some red flags. Watch the opening performance from markets through the New York session. 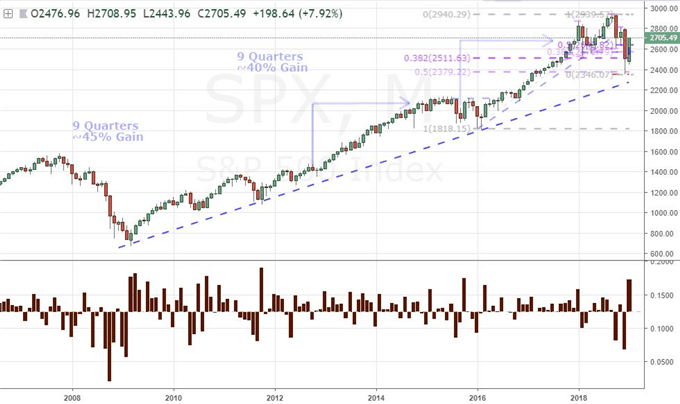 Italy Returns to Recession and the Euro Responds, Though Not Bond Yields

The Euro was Thursday's most fundamentally-active major currency. Following the Pound's response to the Brexit amendment votes and the Dollar's response to the FOMC rate decision, the focus on the shared currency would take over for its concentration on key fourth quarter GDP updates. There were actually multiple data listings for the Euro this past session - including the run of employment data for the Germany, Italy and the Eurozone - but the overview of the official growth figures were not to be over-ridden. On the back of a softer but generally in-line French update, the Eurozone 4Q GDP reading would meet the 0.2 percent quarterly figure and the 1.2 percent annual pace. Though matching economist forecasts, the pace was a notable downshift from the previous quarter's 1.6 percent clip. The true concern comes from Italy's report. The Eurozone's third largest economy - and its most belligerent member - reported a 0.2 percent contraction of the economy this past quarter. With the 0.1 percent slump in the third quarter, this makes for a technical recession. This hardly signals a crisis, but it nevertheless registers as a problem spot for the Euro considering the government has reportedly come under pressure recently to call an early election. The Euro's fundamental pressure has not been fully discharged with this past session’s disappointment. Ahead, Euro-area consumer inflation (CPI) is due and the implications for the subtle dovish shift in ECB policy intent with the recent meeting are hard to miss. That does not however mean that this data will have an easy time encouraging currency movement. An equally-weighted Euro index stands very close to multi-month range support. This is the kind of level where genuine conviction will need to decide next steps. 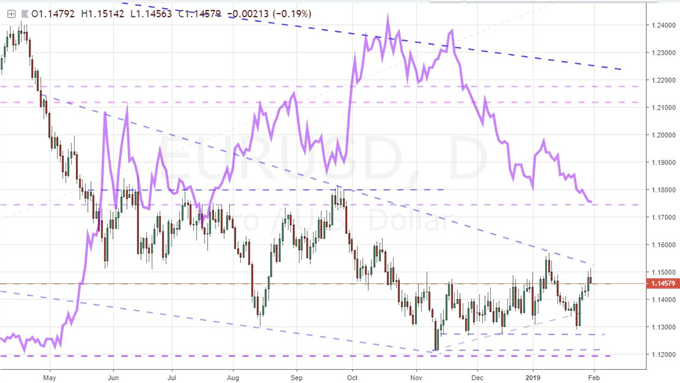 Dollar Steadies After its Fed Blow, NFPs Will Attempt to Stir the Currency

With the Euro under duress, EURUSD would be thrown into competition for weakest performer amongst the majors. The Dollar was the previous session's worst performer following the FOMC rate decision. The world's largest central bank held its official course on monetary policy, but the forward guidance was clearly tailored to be more dovish. Implied yields derived from Fed Funds futures through the end of the year continued to deflate Thursday. We are now seeing considerable debate as to whether the central bank will be able to provide even one 25 basis point hike before the year ends. That said, EURUSD backed off from 1.1500. Considering this benchmark cross accounts for the bulk of the trade-weighted DXY Dollar Index, the Greenback's most common pace setter managed to hold support derived from channel support and the 200-day simple moving average near 95.25. Perhaps if the government shutdown hadn't delayed the scheduled PCE deflator figures - the Fed's favorite inflation reading - we may have had a more decisive move for the day. That said, we will have another opportunity to stir the Dollar to life through Friday. Amid a few indicators, the nonfarm payrolls (NFP) update carries the greatest weight. Despite borrowing some data from the census, the jobs statistics are expected to cross the wires. I would not put the probability of a genuine trend to this data, but volatility is well within the realm of potential. 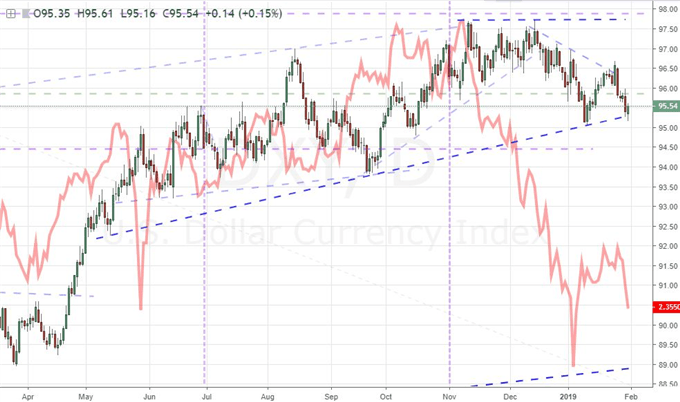 Keeping Tabs on the Pound, Franc, Loonie and Commodities

Outside of the unscheduled themes and the systemically-important event risk, there are a number of markets that deserve a closer review. Passive risk trends and softer Fed tone for example are an ideal boost to emerging markets. The question is: at what point do we need to see a more robust appetite for speculative exposure step in to keep this battered asset class climbing. Regionally, the British Pound is still one of the most fraught of the major currencies. On the one hand, the market is still rejoicing the Prime Minister's ability to establish a common negotiation position for the UK in Brussels. The worrying part is that EU officials have uniformly rejected the suggestion that there would be renegotiation with any consideration of an Irish backstop alternative. Keep focus on headlines give insight into Europe's intended response to the new mandate for Theresa May. Meanwhile, the Swiss Franc is operating with far less fundamental capacity, but its slide this week has facilitated more interesting moves. EURCHF has stalled this past session, and its course setting should be monitored closely if you intend to take a Franc trade. More fundamental in capacity was the Canadian Dollar. The November GDP reading met expectations for a 0.1 percent monthly contraction. That is disappointing but may not be enough of a jolt to pull USDCAD definitively away from its crude oil correlation. Speaking of commodities, the benchmarkoil contract pushed through $54/bbl neckline resistance Thursday, but the effort fell apart as the 38.2 percent Fib retracement of the October-December tumble handily capped any serious effort to post a breakout. As for gold, the advance continues but with a noticeably slower pace. With no material risk aversion in the market at present, its rise has developed from a general interest in the alternative-to-currency asset amid the dovish shift from the world's largest central banks. We cover all of this and more in today's trading video. 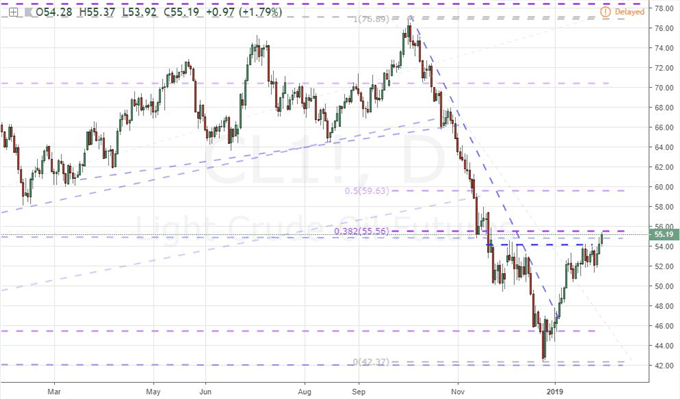