The highly liquid US Dollar aimed sharply lower last Friday amidst market optimism which sunk demand for haven assets. After a week of conflicting news around progress in US-China trade talks, investors seem to be making bets on a deal of some sort next week as China’s Vice Premier Liu He visits Washington. This allowed for most ASEAN currencies such as the Singapore Dollar to appreciate against the greenback

The one notable exception was the Malaysian Ringgit. USD/MYR rose aggressively after local markets were closed Monday for Thaipusam, a public holiday. Softer domestic inflation data later seemed to have supported bets that the central bank of Malaysia could cut rates. But, Bank Negara Malaysia expects prices to average moderately higher this year when it left rates unchanged at 3.25% on Thursday.

Meanwhile the Philippine Peso was little changed by the end of last week. A weaker local GDP report seemed to be overshadowed by pronounced weakness in USD on Friday. The Singapore Dollar edged cautiously higher with an upside surprise in domestic CPI data, but the bulk of its gains were due to underperformance in USD. 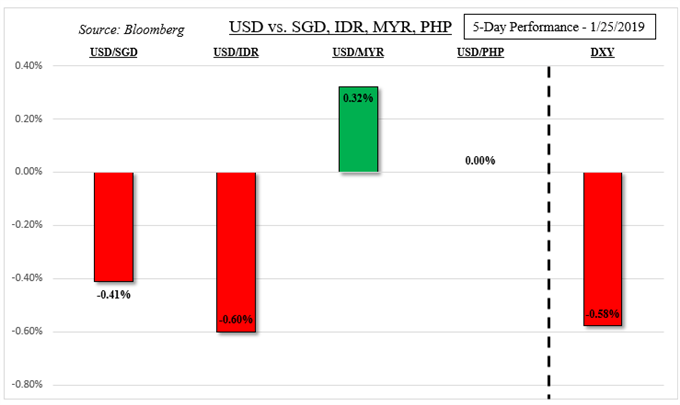 The focus for ASEAN bloc currencies will be directed towards US-China trade talks and how that impacts sentiment however. Given the conflicting messages from the White House, it is unclear what the outcome could be. Since markets appeared to price in a deal of some sort, the risks are arguably tilted to the downside. Should the US Dollar gain amidst disappointment, USD/IDR could rise for example.

Meanwhile the partial US government shutdown ended last week via a temporary stopgap funding bill. In the interim, this means that previously delayed economic data (trade balance, retail sales and more) should slowly be released. On top of that, the regular schedule contains the first estimate of Q4 GDP, employment and PCE inflation data.

Let’s not forget that the Fed also has its first interest rate decision of the year in the middle of the week. With that in mind, there can be a lot of potential here for US Dollar volatility given that the central bank is data-dependent. What is interesting is that last week we did see an improvement in the implied 2019 Fed rate hike path. Yet, the US Dollar fell flat on its face.

This highlights how important the greenback is as a haven asset given its status as the world’s reserve currency. If US-China trade talks lead to a positive outcome and improve market mood further, there can be major upside potential for PHP, IDR, MYR and SGD to gain ground. But let’s also not forget that in the end and perhaps down the road, where interest rates are going are generally the most important fundamental driver for FX. Markets may still underpricing the Fed in terms of anticipated rate hikes in 2019.