Crude oil had a volatile week as prices ranged between $51.80 and $54.20 before settling at $53.55, down about 0.2 percent. The perception of oil’s supply-demand imbalance likely worsened as world leaders voiced concerns over the slowing global economy in Davos, which could have contributed to the drop in oil prices early in the week.

But crude quickly recovered over 2 percent from Tuesday’s close, however, with downward pressure on the US Dollar and turmoil in Venezuela serving as possible catalysts for oil bulls. The move back toward the upside came in spite of bearish EIA inventory data that showed 7.97 million barrels of crude oil stockpiled the week prior when a 42,000 drawdown of reserves was expected. 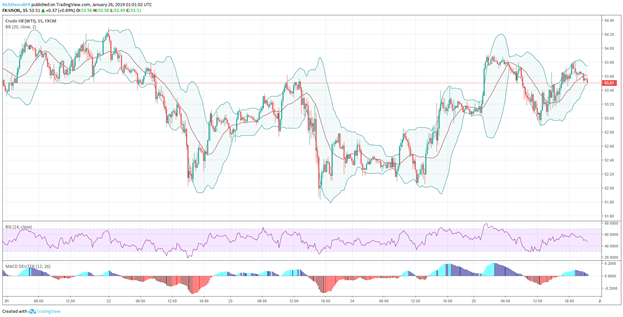 The prospect of a dovish Fed may have aided the USD’s decline, which helps push US crude oil prices higher. This theme could continue into next week with the Federal Reserve on tap to meet for the first time since raising rates this past December, which may come to fruition if Chairman Jerome Powell reiterates the central bank’s relatively dovish tilt.

Also, oil production and exports from Venezuela could be hampered amidst a coup threat on the government. Furthermore, if there is a positive boost to GDP growth projections from the 35-day long US government shutdown ending, the commodity could benefit from the economy getting back on track faster than expected.

Although, it is worth pointing out that if the US-China trade war talks do not make any headway, sentiment could quickly sour and cause fears over slowing economic growth to resurface. This would likely send oil lower. Also, another pivot in monetary policy by the Fed back to a hawkish tone poses an additional downside risk to the commodity.