Dow Holds on to Trade War Hopes and Earnings, Others to China GDP 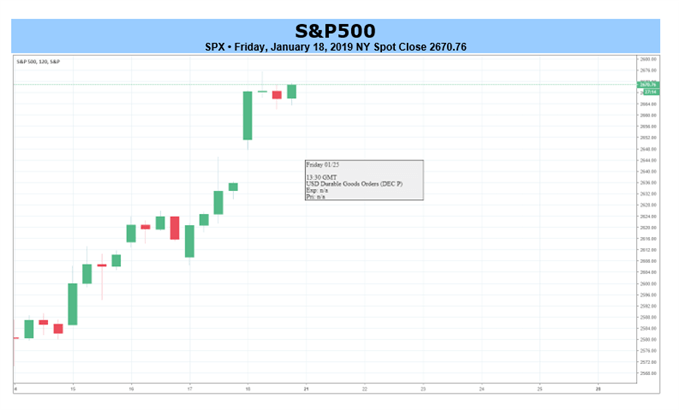 Trade Wars and Earnings Season Will Drive US Stock Markets

Last week was filled with talks of trade war truces and new trade deals between the US and China. Unfortunately, they proved to be false flags, an occurrence becoming all too familiar. Still, US equities enjoyed a bump on each news release, only to eventually retrace. If a trade deal is truly cemented, expect equities to enjoy a rally given that a major headwind is removed from the fray. Unfortunately, clinging on to such hopes is ill-advised with few concrete steps toward a deal being announced.

On the other hand, palpable progress has been made in the fourth quarter earnings season. Last week kicked off the season in earnest with the largest banks and the first FANG member Netflix. Thus far, earnings seem to have generated some positive sentiment despite some mixed performances. Bank stocks like Bank of America (BAC) and Goldman Sachs (GS) dragged the financial sector higher and provided some buoyancy for the larger market this week which was likely boosted further by dovish commentary from Fed Chairman Powell. 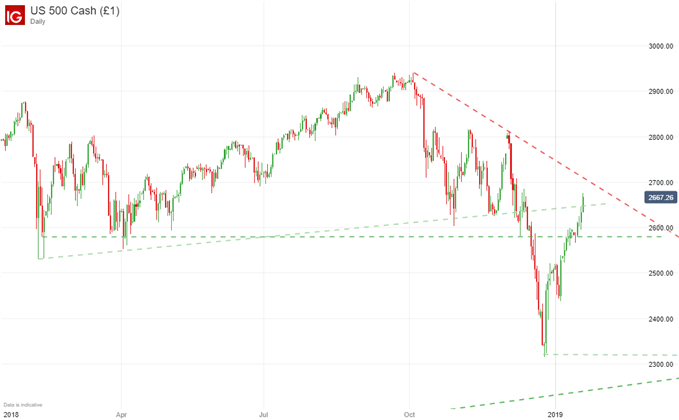 Next week, earnings will continue with giants like Proctor & Gamble (PG), Comcast (CMCSA) and AbbVie (ABBV). Positive results from these or any of the other large corporations reporting next week can spur positive sentiment and, in some cases, single handedly drag an index higher. Follow me on Twitter @PeterHanksFX for commentary and updates on specific corporate earnings and the season overall.

Given the laundry list of conflicting themes in the equity theatre, the fundamental outlook for the S&P 500 is mixed. However, the weekly equity technical outlook may suggest otherwise.

The final broad theme facing the S&P 500 and global stock markets in the week ahead is China’s GDP. The data is due Monday and will offer insight to speculators and investors around the globe as to the degree of China’s economic production which is widely believed to be slowing. As the world’s second largest economy, a slowdown in China has rattled equity sentiment and could have a knock-on effect on the US economy. If GDP is substantially above or below expectations, expect sentiment and equities to act in lockstep globally. 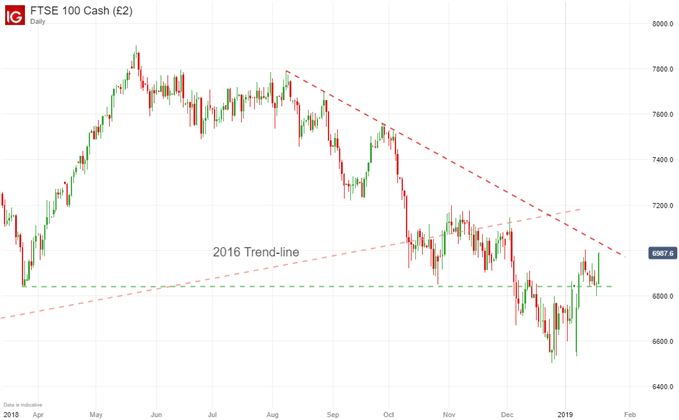 As for the FTSE 100, Brexit will continue to dictate price action. Last week was chocked full of important votes for the nation and the FTSE performed admirably as each result met expectations. Still, not much has changed for the Brexit situation other than the rejection of May’s deal. Parliament could vote to take control of the process on January 21st.

Brexit Timeline – The Path Ahead and How it Affected Markets

If it comes to fruition, the development would have a mixed impact on the FTSE. Some speculators believe Parliament could successfully achieve concessions from Brussels and therefore a deal MPs would agree on. On the other hand, some analysts believe Parliamentary control would increase the chance of a no-deal Brexit. Therefore, the fundamental outlook for the FTSE is mixed.