SEK Traders Now Turning Heads Away from Riksdag to Riksbank?

The end to Sweden’s unprecedented political gridlock is set to be confirmed tomorrow when Sweden’s parliament votes on Social Democrats leader Stefan Lofven as Prime Minister. This comes after he was able to secure a shaky but sufficiently supportive coalition this week ahead of his vote on Friday.

Initially, the political stalemate did not worry investors because Sweden – according to Riksbank officials – is generally viewed as a stable country, and therefore political risk was never a serious concern. However, as the crisis went from inconvenient to inconceivable, investors began to worry. However, those fears appear to be rapidly waning now that the formation of a government is likely to finally happen.

With domestic political risk now reduced, though not completely eradicated, investors can turn their attention more toward the Riksbank’s monetary policy. As revealed in the central bank’s December meeting minutes, policymakers intend on raising rates once in the latter half of this year.

First Deputy Governor Kerstin Jochnick spoke on the 15th, and while he positively remarked on Sweden’s inflation, he cited potential headwinds in 2019 that the Riksbank will be closely monitoring. Some of these risks include growth from abroad – considering Sweden is an export-driven economy this comes to no surprise – and concern over the strength of Europe’s economy. The latter has to do with the unique relationship the EU and Nordic countries share together.

If Lofven is indeed confirmed as PM this Friday, SEK will likely have a brief jump but may then resume its current downward trend. USD/SEK has been closing higher for six straight days in a row, rising approximately 1.70 percent. The pair closed above a key support at 9.0086 but appear to be losing steam and are now looking to close below the price level. If Lofven survives the vote, we may see the pair break below 8.9598 and possibly reach for 8.9094. 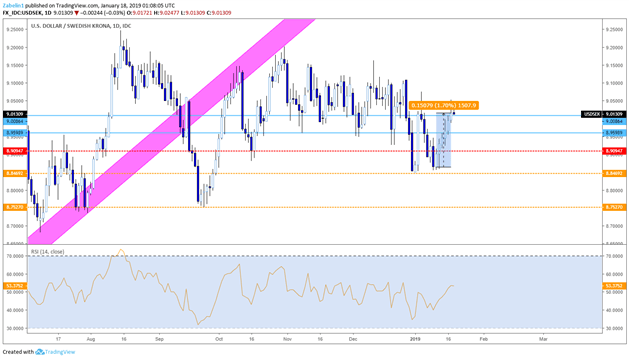