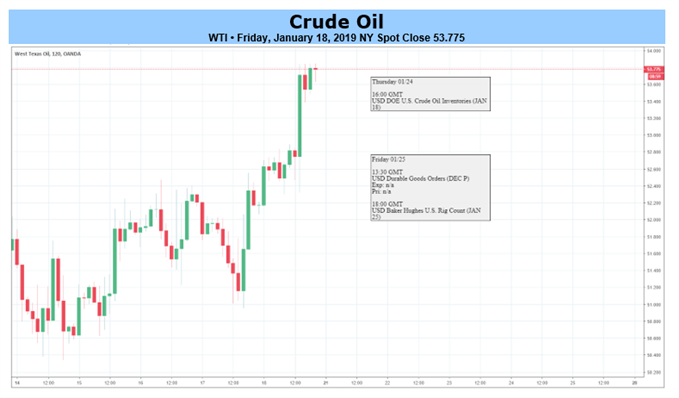 Even though crude oil prices were heading higher into Friday, upside momentum slowed compared to prior weeks. The sentiment-linked commodity was closely tracking the S&P 500 which had a volatile week in-part due to conflicting US China trade news out of the White House. Meanwhile OPEC reported that their oil production fell by the most in two years due to efforts from Saudi Arabia to cut output.

The general lack in exuberant price gains throughout the week, as the oil-producing cartel reported on efforts to bolster prices, could be found by looking into what happened on Monday. Disappointing Chinese trade data added to the fundamental warnings outlined in my previous analysis about what may bring the recovery in the commodity to an end.

This is the threat of slowing economic growth in the world’s largest economies: the US and China. Coincidentally, these are also the two largest consumers of oil. Due to the partial government shutdown in the former, data such as retail sales and durable goods orders have been delayed. If it prolongs, the focus then turns to the latter nation.

China is going to release its fourth quarter GDP report early into the week. Growth is anticipated to weaken to 6.4% after already slowing to a near-decade low of 6.5%. Mind you, economic news flow out of this country has been tending to increasingly underperform since November. This may result in a downside surprise.

Such an outcome risks fueling risk aversion which would bode ill for the sentiment-linked commodity. Especially if the accompanying monthly economic indicators (industrial production, retail sales) follow suit. Other events that carry vulnerabilities for stocks and sentiment include ongoing Brexit developments as UK Prime Minister Theresa May is scheduled to deliver a ‘plan b’ to Parliament on Monday.

We also have the ECB rate decision later in the week. President Mario Draghi expressed willingness to hang on to stimulus which insinuates a more cautious approach given the uncertainties to global growth. For more immediate updates on crude oil prices, breaking news and technical analysis, you may follow me on Twitter @ddubrovskyFX.