Will the Brazilian Real be the Strongest EM Currency in 2019?

The Brazilian Real is on the path to be the most attractive emerging market currency for 2019. The resilience underlying BRL is attributed to the recently sworn in far-right government that has promised to “fix up” the Brazilian economy.

Jair Bolsonaro of the Social Liberal Party won the tumultuous election in October by campaigning on a platform of law and order, and a promise to deliver significant economic reforms. His finance minister, Paulo Guedes, is a University of Chicago graduate and an outspoken advocate of privatization and regulatory restructuring. He is spearheading the economic agenda.

Some of these include reducing taxes, deflating the bloated pension system, mass deregulation and is pushing for selling state-owned assets to foreign and domestic investors.

Since September, the real has risen over thirteen percent and the Brazil’sbenchmark equity index has jumpedover seventeen percent reaching its highest point since the its existence. Investors are riding on Brazilian assets in the hopes Bolsonaro will be able to deliver on his promises for restructuring the Brazilian economy and pulling it away from the precipice of stagnation and a severe recession. 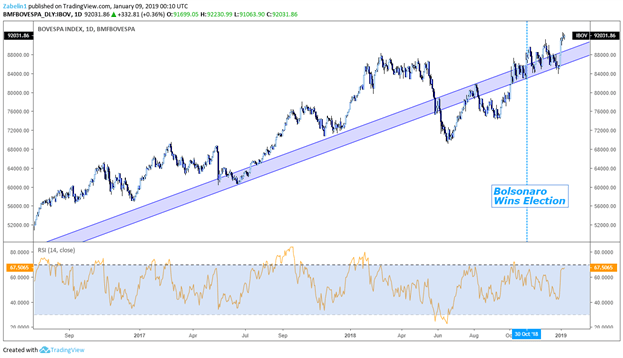 In the short-run, the Brazilian Real will benefit from these changes, and technical indicators are showing a near-term bearish reversal is approaching for USD/BRL. However, the Real may encounter some headwind from fundamental factors that will likely be driving risk aversion in 2019.

In 2018, emerging markets were battered by a slew of idiosyncratic events ranging from the issue of the American pastor in Turkey – which caused the Turkish Lira to fall against the US Dollar by over 30 percent over the threat of US sanctions– to fears of a sovereign debt crisis in Argentina.

This was also occurring against the backdrop of the US-led trade wars and Fed tightening. Risk aversion permeated financial markets and the MSCI EM index from late January to the time of writing lost almost 23%. Risk loving assets such as the New Zealand and Australian Dollar also suffered. These same two themes are likely to dominate headlines again in 2019. 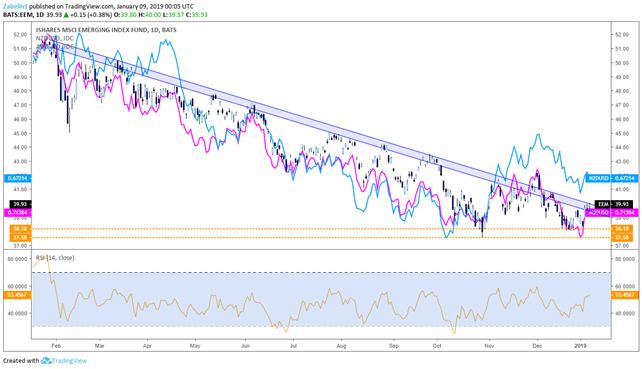 On the trade war front, President Donald Trump and President Xi Jinping recently agreed to an economic ceasefire on December 1 for 90-days. As of this moment, a US delegation is currently in Beijing negotiating with Chinese officials in an effort to put an end to the trade war.

As for the Fed, Chairman Jerome Powell made it very clear at the December meeting that unless major economic indicators reveal a significant slowdown in growth, the central bank will hike rates twice in 2019. This will likely take markets – that have barely priced in one hike – by surprise and will almost certainly weigh on risk appetite. This comes on top of a series of elections in emerging markets in the year ahead that may make traders more risk averse.

If the trade wars resume, political instability rises, and global credit conditions continue to tighten, it will be difficult for the Brazilian economy to prosper and receive foreign investment in an environment permeated by risk aversion and uncertainty. Consequently, the Real will almost certainly suffer in this environment.