The US Dollar heads into the New Year on a weaker note when looking at its performance over the past two weeks. This is despite the Fed delivering more hawkish rate path estimates than what the markets were anticipating. Declines on Wall Street that were the most intense since 2009 were met with the markets pricing out pretty much any hikes from the central bank in 2019.

Given the weakness in the greenback, most ASEAN FX appreciated against it looking at the chart below. What also helped was a last minute recovery in the S&P 500 and to a certain extent in the MSCI Emerging Markets Index as well. This seemed to be because of traders closing their shorts before year-end, resulting in open interest falling as prices rose.

One Asian currency that was relatively mixed against the US Dollar was the Indonesian Rupiah. Indonesia saw its trade deficit widen to its largest since July 2013 unexpectedly at -$2.1b in November. As imports outpace exports, waning demand for the domestic currency can weigh it down. Meanwhile the Bank of Indonesia left rates unchanged and placed more emphasis on currency intervention to uphold the Rupiah. 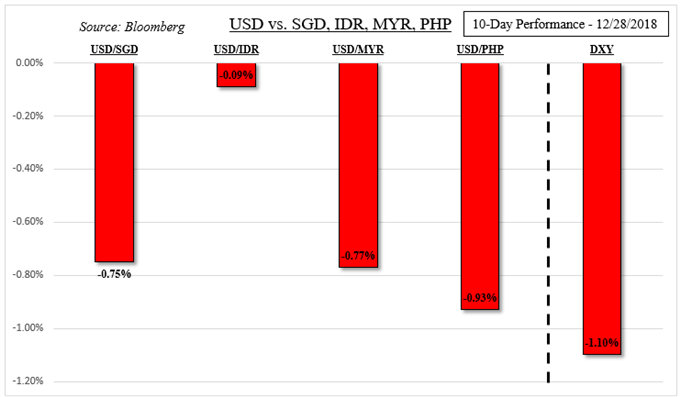 The first week of 2019 is shortened due to the New Year’s holiday, placing the focus more towards the latter half. Regionally, Wednesday contains Indonesian CPI data. Headline inflation is expected to tick down to 3.05%. IDR will probably focus more on risk trends given that this is still well within the central bank’s expectations for inflation in 2019.

What will likely be more interesting this week is Philippine CPI on Friday. Inflation is anticipated to slow to 5.6% y/y from 6.0% in November. This would be the slowest since June given the decline in crude oil prices, a key import for the nation. The Philippine central bank expects inflation to slow significantly in 2019, signs that it might not may fuel more rate hike bets and potentially boost the Philippine Peso.

Looking at the MSCI Emerging Markets Index below, the cautious turnaround in US equities alongside fading 2019 Fed rate hike bets aided to push it above a near-term descending resistance line. While this may signal near-term gains, confirmation of a lasting uptrend would require closing above a falling trend line from July. Currently, the index sits right under the January 2018 trend line which is its next obstacle. 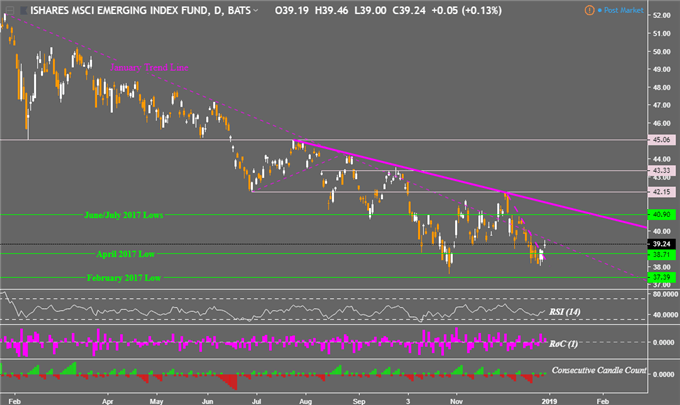 Looking at potential external developments for the ASEAN region, all eyes are on the US. The new Democratic-led House is due to being on January 3rd amidst a partial government shutdown. The new anticipated speaker, Nancy Pelosi, has promised to pass a stopgap spending bill which may temporarily end the shutdown. This could result in extending ‘risk-on’ trade in global equities.

That could fall apart on a relatively disappointing US jobs report towards the end of the week. Local economic news flow has been tending to underperform compared to economists’ expectations. This suggests forecasting models are perhaps too optimistic and may result in more of the same. In particularly, keep a close eye on average hourly earnings.

If markets are done unwinding their shorts in stocks, dismal US economic data could send them lower as open interest stabilizes. Speaking of, US consumer confidence fell to its lowest since July last week. With not much room left to further disappoint Fed rate hike bets, stocks might not have enough vigor to rally on prospects of lower rates in the future. That is, unless rate cuts are expected.

But that seems unlikely at this moment in time given the Fed and its outlook for perhaps two hikes in 2019. Chair Jerome Powell will be interviewed on Friday during the annual meeting of the American Economic Association. Commitment from Mr. Powell to pursue monetary tightening as appropriate risks resuming the dominant downtrend in the S&P 500 which would reverberate into Asian stocks. With liquidity still relatively low given the holidays, expect heightened volatility.