First Quarter 2019 Fundamental Forecasts for the US Dollar, Euro, Oil, Equities, and More

The fourth quarter and 2018 are now in the books, and the ongoingresurgence of market volatility and uncertainty around key thematic influences are set to carry into 2019. With fundamental issues around US-led trade wars, Brexit, political uncertainty rising in Europe, emerging market contagion, among others lingering, the first three months of the New Year should produce opportunities across asset classes. 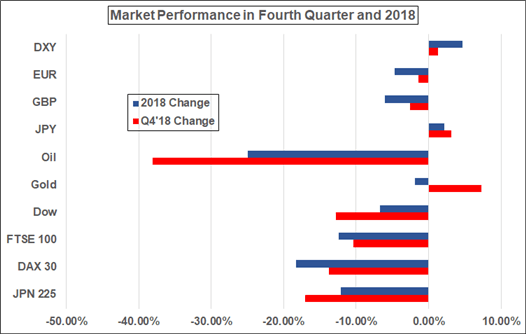 Heading into 2019, the Greenback will continue to be buffeted by systemic crosswinds that could cater to its more elementary fundamental roles or alternatively see capital diverted by unique stability risks.

Heading into first quarter of 2019, even as the Italian government appears to have actually reached an agreement this time around after months of tense negotiations, it’s difficult to feel that troubles will fade and storm clouds dissipate.

The United Kingdom is scheduled to leave the European Union on March 29, 2019; and as we stand, the Brexit Withdrawal Agreement that is currently on offer from the EU to the UK will not pass through a vote in the House of Commons.

Yen Still a Haven in a Very Uncertain World

In truth, the Japanese currency will start the New Year on a knife-edge, its fate very much prey to developments beyond Japan. Developments within Japan have been few, at least as far as we’re concerned here.

At the start of October, West Texas Intermediate (WTI) crude traded at levels near four-year highs. In the weeks following, the commodity plummeted nearly 40 percent. Despite an incredibly painful quarter for crude, the outlook remains bleak.

If the Fed follows through and raises rates, financial market participants will be taken by surprise and investors will possibly flock to the greenback. Rising rates, in turn, would be bad for Gold.

A toxic mix of slowing economic growth, an ongoing trade war between the US and China, as well as political instability in Europe poisoned risk appetite across the equity space. However, it seems to have been the Fed’s dogged determination to normalize monetary policy that set the stage for markets to truly care about these headwinds.