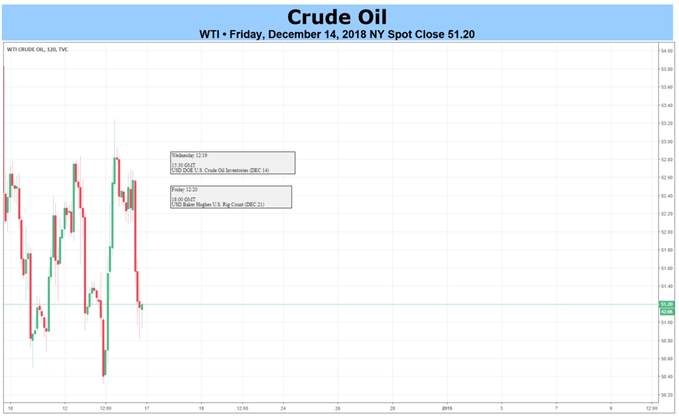 Crude oil prices head into the remaining weeks of 2018 looking vulnerable. Since bottoming in late November, hopes of OPEC production cuts and Russia unexpectedly playing along have failed to reverse the dominant downtrend from October. The sentiment-linked commodity remains undermined by fears of slowing global growth and we still have the Fed rate decision left.

This past week offered oil one of its best days since the beginning of this month amidst supply disruption concerns stemming from Venezuela. Simultaneously, Saudi Arabia announced a curb to petroleum exports to the US. Speaking of, the world’s largest economy has at this point pumped record amounts of output and overtaken Russian production.

The rise in crude oil slowed as risk appetite took a turn for the worse following a very cautious ECB monetary policy announcement. The central bank offered gloomy economic forecasts for the year ahead, then key Chinese industrial statistics slowed to their weakest pace since 2016. As the world’s second largest economy slows, OPEC cuts may be undermined given that China is a key consumer of the commodity.

Still, a report from the International Energy Agency last week offered potential prospects for higher prices down the road. According to the IEA, supply losses from Iran and Venezuela could underpin pledges from OPEC to reduce output. But, it is difficult to pick a fundamental bias until the Fed monetary policy announcement crosses the wires. It may offer something similar to what the ECB did.

Given that crude oil is largely priced in US Dollars, the tone for crude oil could be set by how the central bank impacts the greenback and broad sentiment. At this point, fears of US yield curve inversion and trade tensions between the world’s largest economies have sent 2019 rate hike bets dwindling. Looking at Fed funds futures, the chances of a subsequent hike after December are only at 27.7% in March.

Keep in mind, the central bank’s own projections call for at least three hikes next year. A Fed that revives hawkish expectations for next year is likely to boost the US Dollar and send stocks lower, hurting crude oil prices. Meanwhile, a more cautious tone that emphasizes on the outcome of data with lowered economic projections might do the opposite. Given these uncertainties, the crude oil fundamental outlook will have to be neutral.

For more immediate updates on crude oil prices, breaking news and technical analysis, you may follow me on Twitter @ddubrovskyFX for real time coverage.