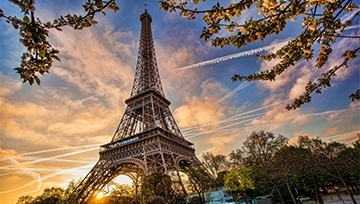 The outlook for the Euro in the weeks ahead is looking bleak after French President Emmanuel Macron was forced to react to the gilets jaunes (yellow vest) protests by raising wages and cutting taxes – moves that could breach the EU’s fiscal rules by lifting the French budget deficit above the EU limit of 3.0% of GDP.

The key to the Euro’s path from here will be how the European Central Bank reacts. Currently it is on course to “normalize” monetary policy by gradually tightening it. However, if the French budget deficit to GDP ratio were to rise to the 3.3% to 3.4% area as GDP growth in the Eurozone slows, it could decide to leave monetary policy loose in an attempt to counter the slowdown.

That would be clearly negative for the Euro, which has been losing ground steadily against the US Dollar since April.

On Monday December 10, Macron announced various concessions in a televised address to help counter the populist gilets jaunes movement, which brought sometimes violent protests to French streets. Having already cancelled a planned rise in fuel taxes designed to reduce carbon emissions, he said he would introduce a raft of budget handouts including a cut in taxes on low-income pensioners and an increase in the minimum wage.

Coupled with a likely economic slowdown caused by the violence, which caused many shops to close in the usually busy runup to Christmas, he will need to cut government spending and find savings if he is to avoid breaching the EU rules. So far, the EU has been more understanding about France than it has been about Italy, which has been forced to lower its deficit target for 2019 to avoid EU disciplinary action.

Italy has offered to bring its budget deficit down to 2.04% of output from 2.4% but it is still unclear whether that can be achieved or is enough to avoid EU sanctions.

So, faced with potential deficit breaches in both the second and the third largest economies in the Eurozone, the ECB may be more inclined to keep interest rates low to stimulate growth and stem the tide of populism despite probable objections from Germany. Already, the markets are beginning to price in no interest-rate increases at all in 2019.

This is all likely to result in confidence in the Euro seeping away. As the chart above shows, EURUSD has been rallying since mid-November but it remains in a downward channel and if the channel support line, currently around 1.12, were broken there is little further support until the lows around 1.07 seen in early 2017.

Euro at Risk: How the EU Might Punish Italy

Euro: What Every Trader Needs to Know