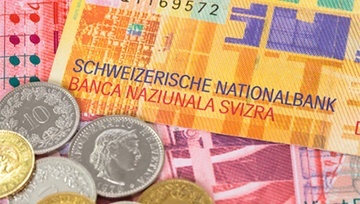 Swiss Franc: What Every Trader Needs to Know

What is the Swiss Franc?

The Swiss Franc (CHF) is the official currency of Switzerland and Liechtenstein. It is also sometimes informally referred to as the “Swissie” by traders.

Before 1798, there were approximately 75 coin-producing institutions Switzerland. As a result, a total of 850 different coins were in circulation that carried different values, symbols, and denominations. In 1798, after the French invasion, the Helvetic Republic was formed and introduced the Franc as a uniform currency. The regime lasted until 1803.

Almost immediately after, Switzerland returned to a decentralized coin minting system. Banks also started issuing notes while foreign currencies poured into the country. By 1820, there were at least 8,000 different coins in circulation. In 1825, several cantons – regional administrative divisions of a state – issued a standard coin called the “Konkordanzbatzen”.

After the Swiss Federal Constitution of 1848 was passed, only the government was able to issue money. In 1850, the Federal Coinage Act was passed, introducing the Franc as the official currency of Switzerland.

In 1865, France, Belgium, Italy, and Switzerland formed the Latin Monetary Union. The agreement laid out a plan to standardize all of the states’ currencies to be equal to 4.5 grams of silver. The union officially ended in 1927, but unofficially continued until 1936 in the midst of the Great Depression. In 1945, Switzerland joined the Bretton Woods System, where it remained until the latter’s dissolution in 1971.

History of the Swiss National Bank

The Swiss National Bank (SNB) was formed out of a desire to reduce the number of note-issuing banks in the 19th century. A motion to establish a central bank in 1885 failed but a second attempt in 1903 ultimately succeeded. The SNB was created in 1907 and granted a monopoly on issuing banknotes in 1910. In 1930, it joined the Bank of International Settlements (BIS).

The SNB is different from most other central banks in that it is a “special statute joint-stock company”. Its share capital is CHF250,000. This is divided into 100,000 registered shares such that each one carries a nominal value of CHF250. SNB shares are listed on the Swiss stock exchange. Shareholders can receive dividends, but these are capped at 6%. In 2017, the public sector held 76.36% of SNB shares while private owners accounted for 23.64%.

Build confidence in your Swiss Franc trading strategy with our free guide!

What moves the Swiss Franc?

The SNB has a three-person governing board, with each member heading a specific division within the bank. They are charged with fulfilling and maintaining the central bank’s mandate of price stability while taking the economic circumstances into consideration.

The inflation target is not an absolute number but a band with an upper and lower bound. The central bank uses policy instruments such as interest rate hikes and cuts to achieve their price growth objective. It also holds press conferences where markets can approximate the direction of interest rates based on hawkish or dovish rhetoric from SNB officials.

As the Eurozone debt crisis emerged with initial turmoil in Greece in 2011, traders started buying up the Swiss Franc as a regional alternative to the Euro. Switzerland is an export-driven economy, so the stronger Swissie amounted to a headwind for economic growth. It also undermined the effort to banish crisis-era deflation. To counter this, the SNB decided in 2011 to put a floor on EUR/CHF at 1.20. When EUR/CHF threatened to dip below this exchange rate, the bank would weaken the Swiss unit by selling it on the open market. This lasted through early 2015.

On January 15, 2015 – despite statements from SNB officials affirming a commitment to the EUR/CHF 1.20 floor made just days before – the central bank abandoned the policy without warning. The unexpected change shocked markets, to put it mildly. The Swiss Franc appreciated by an astronomical 30%, wreaking havoc across the asset spectrum. 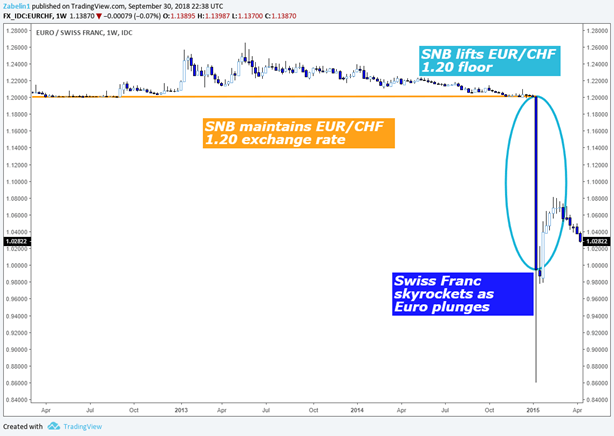 Since the SNB gradually lowered interest rates after the Great Recession to negative levels, it has encouraged the use of a strategy called the “carry trade”. This involves investors using cheaply borrowed Swissie to purchase higher-yielding assets. This allows them to earn the interest rate differential as income. When financial markets are relatively optimistic and traders prize returns over safety, rising demand for higher-yielding assets tends to produce a complimentary increase in their prices. Such market conditions are typically characterized by rising stock markets.

However, an adverse turn in market sentiment that shifts investors’ emphasis to capital preservation can put this dynamic in reverse. Traders that bought riskier assets with borrowed CHF exit those positions and buy back the Swiss unit to cover loans, leading the currency higher. What this often produces in practice is an inverse relationship between the Swiss Franc and “risky” assets, meaning those with relatively higher rates of return compared to safer alternatives (a common example of the trade-off between “risky” and “safe” assets is between stocks and bonds, respectively).

The Swiss Franc is the sixth most traded currency in the world, according to data from the Bank of International Settlements (BIS). Because of its geographic proximity and high volume trade with the EU, owning the Swissie offers a unique regional opportunity to bet on the fundamentals of Eurozone growth without exposure to its structural issues. During times of economic or political turmoil in the EU, the Franc is frequently viewed as a regional haven. 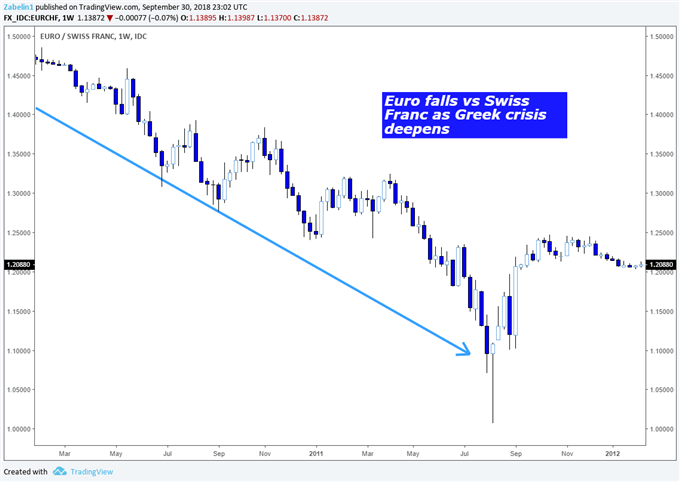 Furthermore, the mechanics underlying the “carry trade” make the Swiss Franc a common way to express a view on overall market sentiment trends. Since the currency frequently falls when markets are broadly upbeat and gains at times of turmoil, it can serve as a useful vehicle for gaining exposure to overall market mood swings.