Australian Dollar: What Every Trader Needs to Know

What is the Australian Dollar?

History of the Reserve Bank of Australia

The idea of creating a central bank was first proposed in the mid-19th century. However, following a major financial crash in the early 1890’s, administrative officials began to take the concept into more serious consideration.

In 1911, legislation was introduced to create the Commonwealth Bank, Australia’s first government-owned commercial bank. Its only central bank feature was that it acted as a banker to the government. The Treasury maintained a monopoly on issuing bank notes until this power was transferred to the Commonwealth Bank in 1924.

In 1945, the Australian government passed the Commonwealth Bank and Banking Act. It officially formalized the administrative powers of monetary policy and exchange controls in the Commonwealth Bank. The legislation also specified that the Governor was responsible for managing the bank.

The Reserve Bank Act of 1959 established the RBA. It was officially implemented in 1960. All central banking powers were transferred from the Commonwealth Bank to the RBA, leaving the former with only commercial banking functions.

Build confidence in your Australian Dollar trading strategy with our free guide!

What moves the Australian Dollar?

The RBA’s mandate is to maintain price stability and full employment as well as to provide economic prosperity for the people of Australia. As a way to achieve these objectives, the RBA set an inflation target of 2-3%. The central bank uses policy instruments such as interest rate hikes and cuts, as well as open market operations to achieve their target.

The central bank also holds press conferences where markets can approximate the direction of interest rates based on hawkish or dovish rhetoric from RBA officials. Additionally, indicators of economic activity such as GDP and CPI reports, along with PMI surveys, have a noteworthy effect on the Australian unit by way of shaping RBA policy expectations.

Unexpectedly positive or negative data from these various indices has a tendency to lead markets to speculate on potential hawkish or dovish shifts in policy from the RBA. Consequently, this market-driven speculation often leads to price fluctuations in the Aussie.

Effect of RBA Monetary Policy on the Australian Dollar 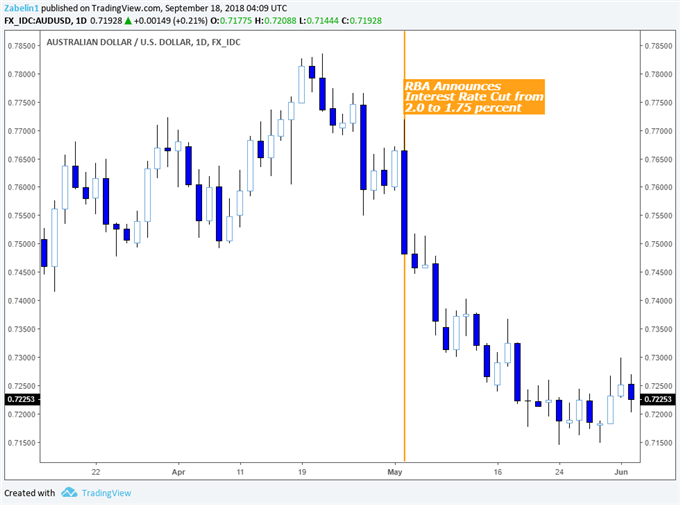 Swings in broad-based market sentiment are another important driver of Australian Dollar price action. Australia is a major exporter of key natural resources such as iron ore and coal. This puts the country at the relative beginning of the global supply chain, which can make it especially sensitive to changes in the outlook for worldwide economic activity. In practice, this can mean the Aussie echoes swings in market-wide risk appetite, as reflected in benchmark stock indexes like the S&P 500.

China is Australia’s biggest trading partner. Significant changes in expectations for Chinese economic activity are thereby frequently reflected in the Aussie’s price movement. One example of this dynamic is the impact of the escalating trade war between the US and China. As Chinese stock markets fell amid fears of declined exports and growth, the Aussie followed suit. 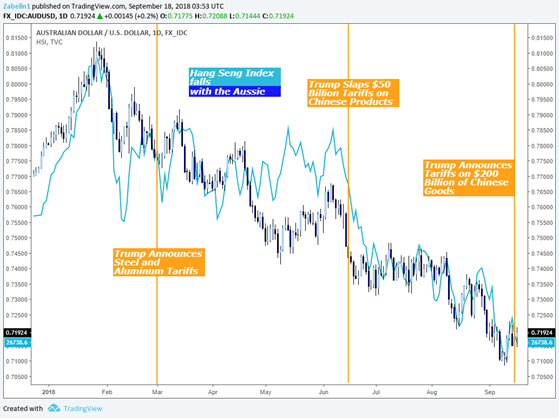 Australia’s geographical position has also made it the ideal trading partner for emerging Asian economies, feeding their voracious demand for raw materials. Traders can therefore use the Aussie as a vehicle to gain exposure to fast-growing Asian markets.

Trading the Australian Dollar is also a way to express a view on market sentiment. Because the Aussie is anchored to the world’s business cycle, it allows traders to bet on expectations for global growth with a highly liquid asset.

Australia also has higher interest rates relative to most developed countries. Traders can use this to their advantage and execute carry-trade strategies against currencies that offer a comparatively lower interest rate, such as the Japanese Yen.