Since the start of the tumultuous year, the Krona has been on a steady decline against the US Dollar. This in large part has to do with the strengthening USD that is being fueled by a hawkish Fed, combined with the Riksbank’s dovish disposition. The current repository rate stands at -0.50%.

Decline of the Krona 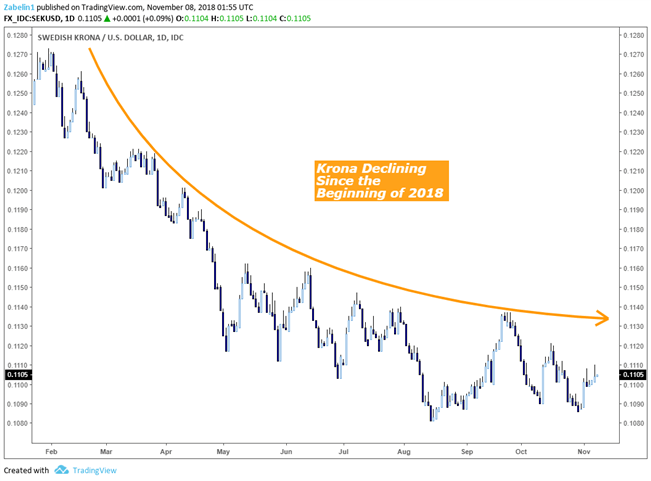 However, economic data has showed that inflation has picked up to levels conducive for a shift in policy. The bank’s target is to maintain inflation hovering around 2 percent, with August numbers showing a jump to 2.3 percent. The Krona rallied on the news as it increased the probability of a rate hike.

Administrative officials from the central bank are still debating on whether to hike rates in December or February. This would be the first rate hike in 7 years. The most hawkish member has been Deputy Governor Martin Floden who stated that he is “not fond” of the weak Krona, and will not welcome any large declines. He also remarked on the lack necessity of further upward pressure on the country’s inflation.

All these comments seem to suggest a strong inclination to raise rates in December. The markets’ priced-in outlook has gyrated wildly however, reflecting a host of potential spoilers that might derail tightening. Ongoing political gridlock that is currently gripping Sweden’s government is one of these.Uncertainty from abroad - including trade wars, turmoil in Italy and slow-moving Brexit talks – is also a contributing factor.

Furthermore, core inflation remains worryingly low at 1.044 percent as of September 30th. The prospect of slower future growth is calculated into the rate decision, with Floden remarking that there is a “rather small” danger of being late on rates.

The risk being that in the event of a crisis, the central bank can only lower rates so much until the impact becomes negligible. Raising rates now in order to counter higher than desired inflation and preparing for future stimulus measures may be the logic behind this decision.