BRL and IBOVESPA Soar on Bolsonaro Win, Optimism May Not Last 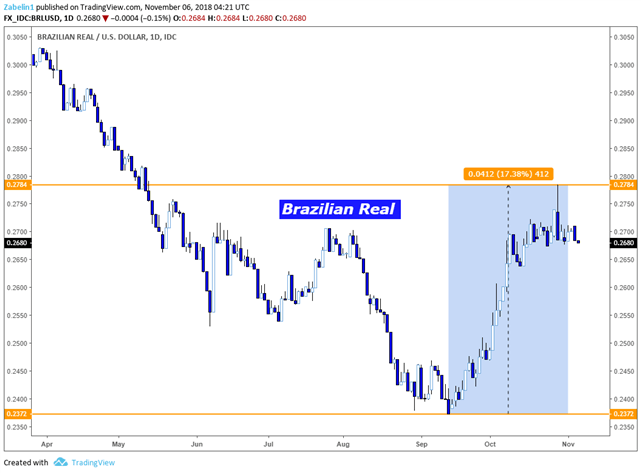 He cruised to victory garnering 55.54% of the vote, a 10-point lead over his counterpart Fernando Haddad of the Worker’s Party, who came in at 44.46%. In the Senate, the PSL gained four seats – up from zero – and in the Chamber of Deputies, Bolsonaro’s party holds 52 seats, up from 44.

However, the National Congress of Brazil – the federal government’s legislative branch – is fractured due to a plethora of small parties. This will likely make policy formation difficult for Bolsonaro, and may therefore be concerning for investors.

The new President’s popularity in the business community comes from his pledge to trim the deficit, lower debt and reduce the size of government. He has also stressed the importance of central bank independence.

Many of these policies come from his economic advisor Paulo Guedes who was trained at the University of Chicago and is a known advocate of free-market policies. He will likely head the future “super ministry”, an administrative overhaul that will combine the planning, finance, and industry ministries as a way to streamline policy formation.

The market reaction initially signaled optimism as the Brazilian Real and local equity markets rallied on the former army captain’s victory. Since the start of October, the IBOVESPA has gained over 14 percent, and the iShares MSCI Brazil EWZ ETF reached its highest point since Mayafter the election. 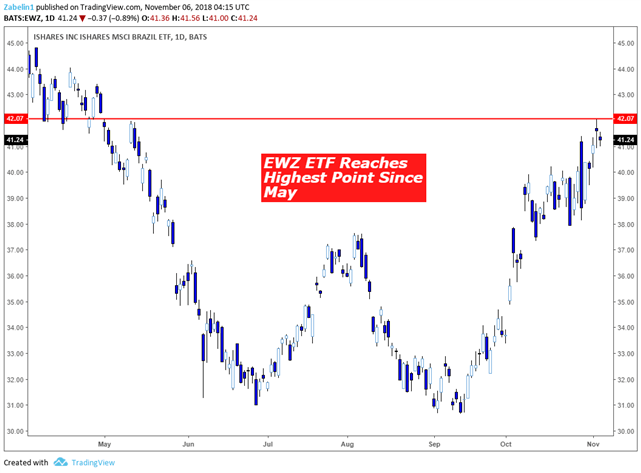 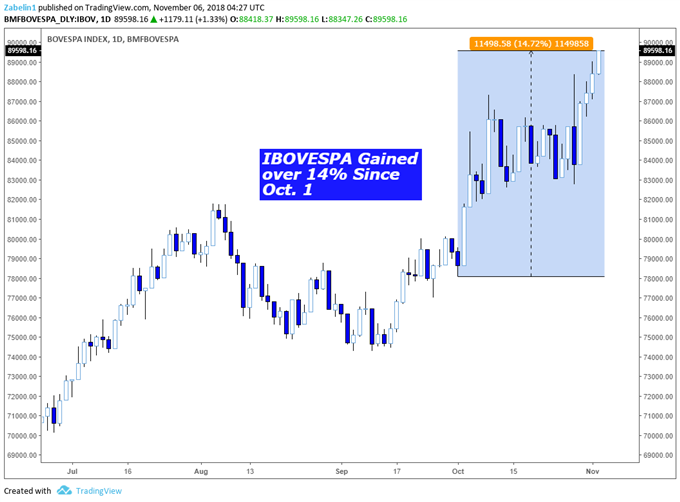 Favorable polls leading up the election frequently moved these assets as well, hence their progressive upward movement that coincided with Bolsonaro’s rising popularity.

However, various long-term risk variables that loom over the horizon may erase the newly established gains. As an emerging market, Brazil is still vulnerable to the broader risk-aversion that is weighing down on market sentiment. This is primarily being fueled by the strengthening US Dollar and ongoing trade wars.

There is also the question of whether Bolsonaro can indeed push forward his agenda given the fractured Congress and radiating waves of contempt emitted from other parties. Concerns also still loom over the very small but real possibility that he may gradually undermine democratic institutions and plunge the country into political turmoil.

These fears come from his praise of the military dictatorship and the unusual number of military personel he is planning on appointing in his cabinet. He is also entertaining the idea of centralizing public security, thereby moving power away from other state legislatures.

Bolsonaro’s relative unpredictability is also a source of worry. Prior to his rise, he was what many characterize as an economic nationalist who was antagonistic toward foreign investment. His sudden change in tune, while praised by markets, hints at the possibility that he could (radically) flip his positions. Investors are now holding their breath to see if Bolsonaro can – and will – deliver on his promises.