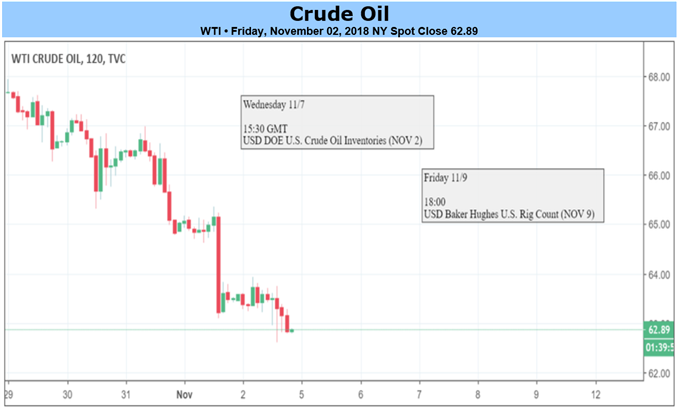 WTI crude oil fell 13.26% over the last month while Brent fell 8.7% and NYMEX Gasoline, a refined oil product has fallen 15.8% while crude calendar spreads have fallen into contango where the front-month futures product trades at a discount to a latter month contract of the same commodity. 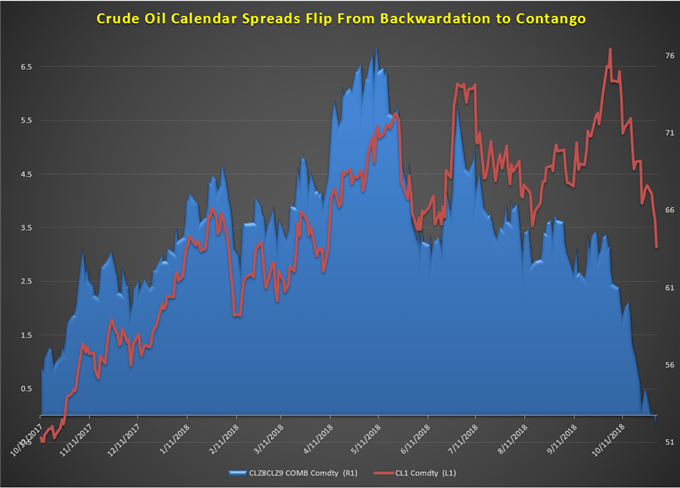 If you went into the month of October bullish crude (I did,) you are likely now questioning what has happened in a little over 20 trading days that have taken the market from four-year highs to a near bear market (I am.) A bear market is defined as a 20% drop in a market, which would happen on a move below $61.45. Currently, crude has fallen as much as 18% from the YTD high on October 3.

This week’s move in crude to six-month lows were backed by multiple negative shifts in narratives underlying the oil market. A key development that caused additionally selling later in the week was news that OPEC output jumped to the highest levels since 2016, which pushed the futures spreads of the December 2018 – December 2019 WTI contract to negative, which has wiped a lot of underlying buying pressure.

Adding to the concern of ‘too much supply’ is the news that the U.S. has agreed to let eight countries -- including Japan, India, and South Korea to keep buying Iranian oil after it reinstates sanctions on Nov. 5. China has all along said they’d be a buyer. This news helps to explain why crude has experienced its biggest loss since February.

Technical Analysis Shows Crude May Have Experienced a Higher Low

In a little over 20 trading days, crude has seen a range of 18.3% on the drop from the year-to-date high of October 3rd. Now WTI looks to be rolling over back toward the broader 10-year trend.

The weekly chart above shows that the 2016 to 2018 rally has possibly been a bear market multi-year rally, and a break below $63/bbl (highlighted on the chart,) could set the table technically for a move toward the lower $50-barrel zone. The long-term trend since 2008 shows lower highs, and a trendline drawn off the 2008 and 2014 highs may prove too much for the current trend to overcome, and the odds of this being proven would heighten on a break below $63/bbl.

The channel drawn on the chart aligns with the falling ten-year trend line and Fibonacci retracement of the 2014-2016 range that shows the breakdown was swift and now faces a test near $63/bbl. A break below the yellow rectangle and out of the zone may show that oil’s outlook has turned decisively negative on a fundamental, physical, and now the technical point of view.